The quiet praise surrounding Amat Escalante’s 2016 horror film The Untamed feels like it was the victim of the very thing this Mexican film was analyzing: it was too taboo; too weird for audiences or critics to hold in higher esteem. I took on covering it without ever hearing a whisper, without knowing a single detail of information about the psycho-sexual horror film, and now that I’ve seen it I might not be able to get it out of my mind for months. From the opening frame, there is an eerie notion about what The Untamed is about, which the subtext is up to multiple interpretations, but it cannot be decoded with just one viewing, and it will be easily dismissed by those unwilling to be challenged. Because The Untamed is not just a violating film of the mind, but an example of how cinema can test the viewer, force audiences to see horror in all different kinds of ways. The Untamed cannot be kept under control, it can only seduce the viewer into a place the mind has never gone before, sliding into the back of your head, forcing you to see a new kind of horror. 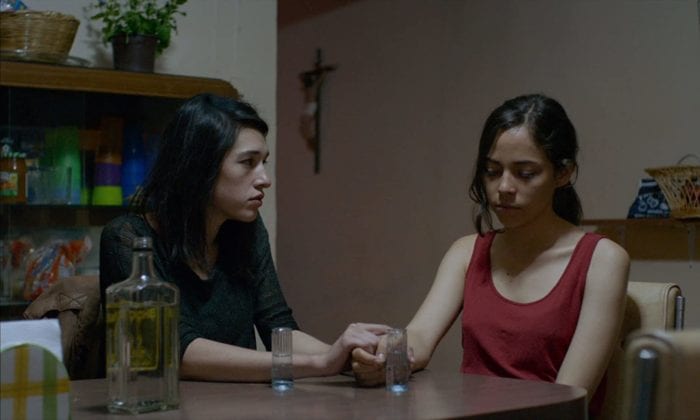 It begins with a shot of an asteroid in space, which is then followed by the shot of a woman named Veronica (Simone Bucio) laying on a bed. She exits a barn set in the rural fields of a small Mexican village, fog covering the hills, and as the clouds clear we see Veronica bleeding from her stomach, attempting to get on her motorbike and escape from something that attacked her. The reveal of what exactly it was will not arrive till later, but the tone has been set that whatever it was, which is something that Veronica is hoping she can interest others in. She looks no further than the nurse that helps her with the wound—Fabian (Eden Villavicencio), a gay man—with the look of an innocent wounded puppy.

The other two players are Alejandra (Ruth Ramos), sister to Fabian, and wife to Angel (Jesus Meza). The triangle is that Angel is sleeping with Fabian, a secret being hidden from everyone in the family—with two children involved—and Angel’s parents financially supporting everyone. The reason it is secret is not just the infidelity, but because Angel is ashamed of his attraction to Fabian. He hates himself for needing him, and he takes it out on himself and his family, barely able to have any sense of passion with Alejandra. What surrounds all of these characters is the secrecy, while living in a middle to lower class home, the humiliating nature creeps into everything, and when Veronica introduces Fabian to this beast in the forest—this thing that she cannot get enough—it leaves the brother dead in a lake, and soon all secrets will become revealed. But what is this thing that is feasting off the weak? What is this monster? The reveal of it is what propels The Untamed into the delightfully obscene. 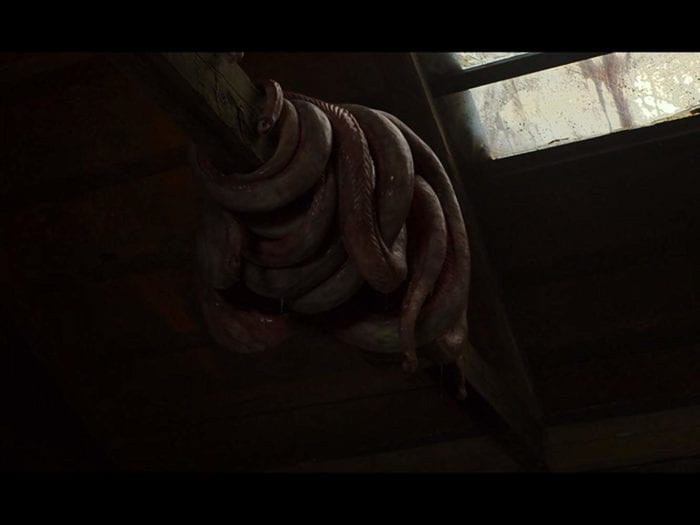 Inspired by Cronenberg, Possession, and a Side of Mexico That Others Fear:

To dissect The Untamed is to rip open a fully operating human body of cinema: the heart beating, the lungs pulsing, an entire system functioning to create something beautifully violent. The first part of inspiration must be focused on the filmography of David Cronenberg, whose entire career has become its own genre of cinema, involving the obscure, psychosexual, and imagery that can typically be called haunting. Most viewers first discover Cronenberg with The Fly, but the film that mingles most with The Untamed is The Brood. Both films involve a main character discovering something they don’t understand because the mind cannot imagine it without being exposed to it. A series of murders sends Frank Carveth (Art Hindle) down a path into the practice of Dr. Hal Raglan (Oliver Reed), and as he inches closer to what is actually going on, soon becomes a revelation of odd birthing body horror. In The Untamed it’s not till Veronica introduces Alejandra to the beast—a pink tentacled organism—grasping around her body, giving her intense pleasure, where the narrative shifts from a narrative about untapped passions, to a fully submerged loss of self. In Escalante’s direction and writing with Gibran Portela, they are not just feeding off the weakness of the lower class, but focusing on their entire existence, and how a deprivation of their natural human needs, only leads to finding those needs in a more dangerous and reckless route.

The other two cinematic references are Andrzej Zulawski’s Possession and the differences in contemporary Mexican cinema. Possession is a gold standard of horror, both in the physical performance by Isabelle Adjani in her out-of-body possessed dominance and the comparative aspect of a woman seeking out her sexual desires. What makes The Untamed’s approach different from Possession is that it’s not just investigating the sexual desires of women, but the sexual desires of men—both in a homosexual, and bisexual way. Fabian’s love for Angel is genuine, but not reciprocated on the same level. That is the same situation for Alejandra and Angel, where her love is there for her children, but missing the attention someone seeks from their spouse. And the person in the middle is Veronica.

She is an archangel, the snake tempting Adam and Eve in the garden, and introducing them to the freedom they never had. Within that narrative of desire is something we rarely see in Mexican cinema. The legendary films of Alfonso Cuaron, Alejandro Gonzalez-Inaritu, and Guillermo del Toro all have made movies that study the history of politics in Mexico (Roma, Amores Perros, and Pan’s Labyrinth), but none of them fearlessly observing the Mexican people in the way The Untamed does. Escalante focuses on characteristics that conservative Mexicans see as wrong, such as vegetarianism, homosexuality, and sexual fluidity. The other three directors have observed their native lands from afar, ultimately fearful of showing an authentic viewpoint of Mexican people. 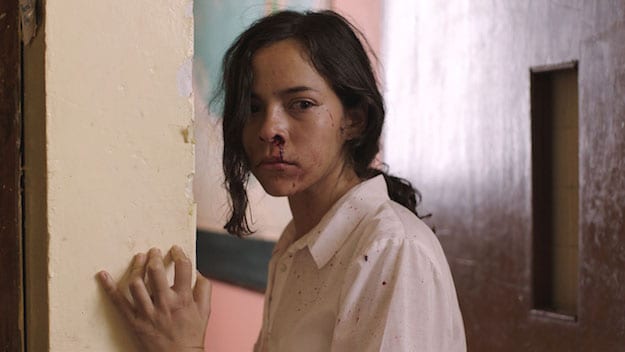 Social Terror Wrapped Around the Body of Innocents:

Now we circle back to how The Untamed, which has an 86% on Rotten Tomatoes, has become a relatively unknown film to American audiences. The obvious answer is that it’s a foreign language picture, with subject matter that contemporary audiences fail to seek out, and a movie deserving of articles such as this. That’s why I found The Untamed to be a reminder of the power of cinema. A movie with palpable narratives, and unknown creatures, evoking the imagery of H.P. Lovecraft, mixed with the social introspective of an Agnes Varda yarn deserves to be discovered and then cherished.

The concept of a squid-like monster may seem like an odd expression of hentai fetish, but is more similar to the nightmare artwork of H.R. Giger, facehugger creature in Alien, and the squid beard of Davy Jones in Pirates of the Caribbean; It’s the kind of imagery that frightens and sticks in the back of the mind. If you can move past judgemental views, fear for the unconventional, and try to discover a new kind of horror, then The Untamed should become a must-watch on Shudder this week. What’s certain for me is that the cinema of Amat Escalante will always be on my watchlist. His storytelling is daring, trying to challenge the viewer, and a true auteur in the sense of the term. Take the risk and become wrapped up in the many arms of The Untamed.

Looking for more from Shudder? We’ve got you:

“The Power Provides Many Jump-Scares Underneath Its Message”

“Rape, Revenge, and Realism in Violation”

“Shudder’s After Midnight Tells the Story of a Genuine Relationship”

“Before the Fire Is an Admirable Pandemic Thriller”