Making an artsy movie is tricky business since there’s a very fine line between being profound and pretentious. For every Eraserhead, there’s something with its head shoved up its butt, and I wasn’t sure which one Koko-Di Koko-Da would be judging from its strange trailer. The answer, as it turns out, is somewhere in the middle, with the film frustrating and wowing in equal measure. It channels the likes of Groundhog Day and Funny Games with its premise, and it works during its first act. Problems rear their heads the longer the movie goes on.

Koko-Di Koko-Da tells the story of Tobias (Leif Edlund) and Elin (Ylva Gallon) following their daughter’s death during a family vacation. Three years after they lose her, it’s made clear from a long, passenger seat shot during a car ride that they are struggling to make their relationship work. They bicker about small things like what flavor of ice cream Elin wanted from a store. It’s very much a symptom of their shared history, and the movie is at its best during these opening scenes, which do nothing but let these damaged characters interact with one another. It goes a long way towards depicting them as a real couple who have suffered a loss; there are no explosive fights, no shouting contests. Instead, the tension is more deeply rooted in the fact that neither of them wants to be with the other, but both are too afraid to change. 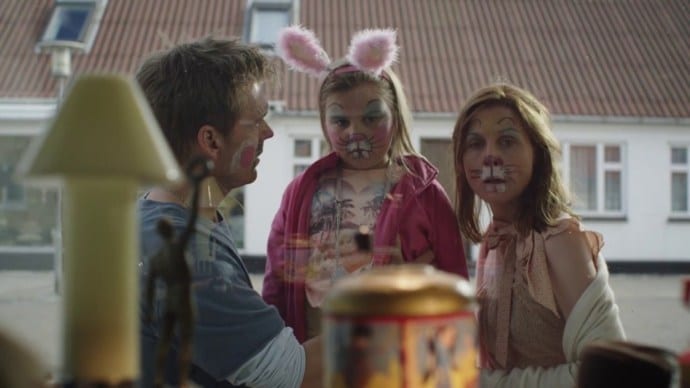 Both leads do a good job of making these scenes feel natural, which makes the first intervention of the movie’s killer trio feel all the more shocking and abrupt. While camping in the middle of the woods (a seemingly random dirt path that Tobias chose), they are visited by three strangers when Elin gets up to relieve herself. There’s Sampo, an extremely large unibrowed man carrying a dead dog; Cherry, a woman with a bizarre, almost anime-like hairdo who sports an old German pistol; and Peter Belli as Mog, an old man in a stark white suit who commands a dog to do terrible things.

Elin is presumably killed by a blow to the head, and soon after, Tobias is attacked by the dog and, having overcome that by stabbing it, is executed off-screen by Cherry with her pistol. We don’t actually see the execution, as the movie tips its hand during this intense scene. After Tobias’s implied death, the viewer is brought back to the opening of that very scene, with Elin needing to urinate and Tobias waking up. Only this time, he remembers a little more.

This conceit is where the bulk of the movie’s action happens. There are a small handful of variations of the couple being attacked by these twisted nursery rhyme characters, and it’s here that the movie will turn into a love-it or hate-it affair for most people. On the one hand, the bleak tone is captured very well through the fluid, tremendous cinematography. The way the camera lingers on scenes truly plants you in the moment, making you feel just as desperate as its characters do. On the other hand, there’s no getting away from the fact that this is, by its very nature, a repetitive movie, and its refusal to adhere to traditional storytelling can prove to be frustrating like it did for me.

Even though something like Groundhog Day is also repetitive, Bill Murray’s character in it is not. He learns as the movie goes on, retaining his memories and leading to a pretty clear and well-defined arc for his character. While Tobias is seemingly able to recall his previous timelines (with each subsequent scenario, he gets a little further in escaping the murderous trio), it’s tough to parse out whether or not he and Elin grow as characters.

Or, rather, the movie tries to make you believe it’s saying more than it actually is. Movies executed in such an odd manner are always left open to interpretation, but for me, there came a point in the second act where I felt the movie had made its point and was continuing to make its same point again and again until the credits rolled. It’s clear from the get-go that the trio is essentially a manifestation of their grief, testing the couple and pushing them to their absolute limits again and again until eventually, they just break free of it. Or maybe they don’t. The ending makes it unclear just how far they’ve progressed emotionally.

Of course, the repetition is part of the point. It suggests that grief will never let you go until you learn to live with it. It suggests that grief ruins relationships, causes people to act erratically and selfishly. These things can all be true depending on the individual, but for me, it didn’t change the fact that, even at a slim 90 minutes, Koko-Di Koko-Da feels like it goes on for too long. I could see it working as a 50ish minute short film and have it still make all the points it makes. Sure, there’s something to be said for watching a well-crafted movie, which this most certainly is, but it’s also downright unpleasant at times, too.

There’s a scene during the second loop where Elin urinates right outside the tent, and their site is beset by the killer trio. They knock her out, and the dog starts drinking up her urine from the ground before being prompted by Mog to go for its source. The scene is relatively tame in what it shows and how it doesn’t go over the top, but I was left wondering why the director chose to show something so blatantly gross. I’m not a squeamish person by any means, and I enjoy a good gross-out movie like Dead Alive, but there’s often a degree of separation between movies like that and reality. I seriously doubt anyone has experienced anything close to the lawnmower scene in Dead Alive. A dog drinking someone’s urine then assaulting a woman is something that could theoretically happen, and it left me with a bad taste in my mouth.

The reason I’m focusing on this scene, in particular, is because it’s where Koko-Di Koko-Da becomes a straight-up exploitation film for a few minutes. You can certainly execute exploitative subject matter in a way that feels earned, but with this particular movie, the sheer repetitiveness of its structure and the fact that it lacks anything in the way of a conventional narrative made these little flashes of exploitation stand out like a sore thumb. It didn’t feel earned, and instead felt like something gross thrown in for grossness’s sake.

All these words and I still don’t know who I would recommend the movie to. It’s exceptionally well made, with all-around good performances, gorgeous cinematography, and great sound design. It also lacks any sort of narrative thrust, with it focusing solely on the torment of its lead couple with little in the way of themes or message beyond “grief messes people up.” Even its raw intensity wore off after a while for me, and I wanted it to be over. Maybe that’s the point of a story about the suffering of two people, but in this case, it didn’t feel terribly compelling. For all its quality production, it felt just as stuck in place as its leads. I have no doubt that this movie will find its audience now that it’s dropped on Shudder, but for me, I could have done with a shorter, more focused experience.