David Cronenberg’s 1979 psychological body horror, The Brood, may be the messiest divorce in film history. Frank and Nola (played by Art Hindle and Samantha Eggar) are in the middle of ending their marriage and are coping with it in different ways. Nola is seeing a renowned psychotherapist named Dr. Hal Raglan (Oliver Reed) while Frank appears to be ignoring the event entirely.

Frank sees firsthand Dr. Raglan’s experimental practice, which seems to center around diving deep into his patient’s psyche to unearth buried trauma when he sits in on a session in an auditorium at the Somafree Institute. And from the back row, Frank witnesses an adult man regress to a child-like mental state due to a technique called “psychoplasmics.”

Frank finds the process unsettling, particularly because the mother of his child has become Dr. Raglan’s favorite patient. When he discovers bruises and scratches on his daughter’s body, it motivates him to push for full custody with the intent of cutting off contact between Nola and their daughter, Candice.

The bitter custody battle that takes place in The Brood was inspired by Cronenberg’s real-life divorce, as well as the film Kramer vs. Kramer. In the book Cronenberg on Cronenberg, the director is quoted saying,

The Brood got to the real nightmare, horrific, unbelievable inner life of that situation. I’m not being facetious when I say I think it’s more realistic, even more naturalistic, than (Kramer vs.) Kramer. I felt that bad. It was that horrible, that damaging.

Cronenberg continues to expand on his personal situation that mirrors the plot of the film,

At the time I was fighting for custody of my daughter Cassandra by my first marriage. I got a call from my ex-wife saying she had decided for religious reasons to go and live with these nice people in California and was going to take Cass with her. I’d get to see her at Christmas and stuff, and she was leaving tomorrow. I said ‘OK, that’s nice, great, good luck.’

I put the phone down…and went to the school and kidnapped my daughter. It wasn’t really kidnapping, but we were still sharing custody. I got a court order which prevented her from taking Cass. And then she left. After swearing that she would never leave her daughter, she signed her over to me so that she could go. And that’s where she’s been ever since.

Cronenberg’s personal stakes in the creation of this film add a cathartic quality that both supports and counters the belief that this film is misogynistic. Though Nola is by far the film’s most intriguing character (and Eggar’s Shakespearean performance truly elevates The Brood), her role as the female monstrous villain is a common trope that exists in horror. Whether it’s a witch, a vampire, an undead bride, or any other familiar role, the female monster usually allows a glimpse into the plight of women in society; in The Brood, we witness the birth of Nola’s undealt with grief in the form of murderous doppelgangers that resemble her daughter.

Frank drops off his daughter at her grandmother’s house. Through a therapy session between Nola and Dr. Raglan, we learn that Nola’s mother, Nuala, was physically and mentally abusive and that her father was willfully ignorant. Frank’s decision to leave his daughter in the care of an abuser, who is throwing back hefty pours of alcohol when we meet her, continues the cycles established by Nola’s parents—the abuse of the mother and the dangerous apathy of the father. And when Nuala goes to the kitchen to refresh her drink, a creature from Nola’s “brood” drops from the ceiling and murders Nuala with a kitchen utensil.

Later in the film, Nola’s father, Barton, drunkenly calls Frank and tries to convince him to help break out his daughter from her therapy sessions. Then, in the same house that Nuala was murdered in, a house that we can assume Nola grew up in, Barton is also bludgeoned to death by the same creature that killed Nuala. It is telling that, the moment before he is struck by the creature, he confuses it for Nola.

What draws contemporary audiences to The Brood is its portrayal of the subconscious as physical monsters. Nola’s parents are the source of her dangerous mental state, so when psychoplasmics allow her to materialize her deep-seated anxieties they naturally seek to avenge her trauma. Hence, both definitions of the word “brood” are fitting for this film, since it deals with Nola’s reflection on her unhappy childhood and the subsequent birthing of a brood of mutant, murderous children. 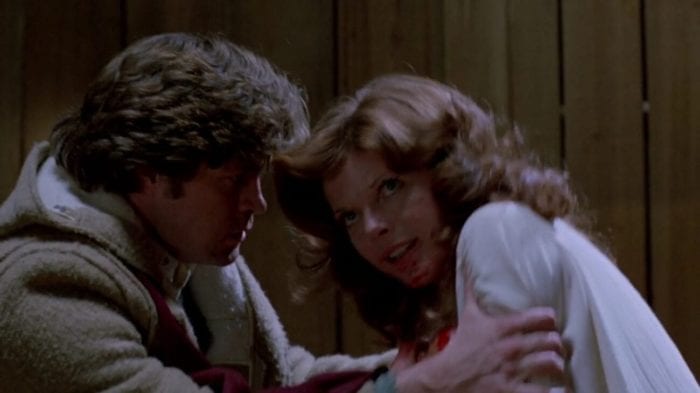 The film’s final 20 minutes make up for many of its faults (most of which can be blamed on the lackluster performance from Art Hindle) by delivering on Cronenberg’s famous body horror. When Frank finally confronts Nola at the institute, we discover that she is the source of the brood. After gaslighting Nola into believing he’s there to fix their relationship, and not to save his kidnapped daughter, we get a simple yet iconic line.

“Then look,” Nola says as she opens her white gown to reveal skin sacs containing embryos and one particularly large exterior womb containing a fully-formed fetus, which Nola frees from its sac by ripping the flesh away with her teeth. Nola then proceeds to lick the newborn clean (a scene that Eggars said made some of the crew nauseous). Once she recognizes the revulsion on Frank’s face, we get Eggar’s other classic line, “No, I disgust you. I sicken you. You hate me.”

Barbara Creed expands on the significance of the “monstrous womb” in her book The Monstrous-Feminine: Film, Feminism, Psychoanalysis. She writes,

The final scenes help us to understand the possible origins of Nola’s rage—her husband’s disgust at her maternal, mothering functions. Nola as archetypal Queen Bee, as woman in her reproductive role, repulses man. The difference here of course is that Nola, compared to other women, conceives and gives birth to her brood alone, her parthenogenetic offspring are like zombies; without a mind of their own they are completely at their mother’s bidding.

They are, in fact, the mother. The father, it appears, has retreated from the family scene altogether. The implication is that without man, woman can only give birth to a race of mutant, murderous offspring. While it is true that the film presents Nola as a victim of her upbringing, she is also mainly a victim of her mother and the latter is a victim of her own mother, and so on. Woman’s destructive emotions, it seems, are inherited.

Whether Cronenberg was consciously commenting on the concept of the monstrous feminine or blind to it is unclear, but the director has admitted that the character of Frank is a stand-in for himself and that in addition to The Brood being his film that fits most succinctly into the horror genre it is also his most personally cathartic. So when Frank strangles his ex-wife, we can interpret this as a representation of Cronenberg’s personal brood.

However, Cronenberg is an artist with enough introspection to realize that he too has contributed to his child’s inherited trauma. The Brood portrays an atypical representation of parental abuse wherein the matriarchs are the physical abusers and the patriarchs are the negligent protectors.

Throughout the film, Frank places his daughter in someone else’s custody which results in Candice witnessing violent and disturbing acts. When placed in the custody of her alcoholic grandmother, she sees the aftermath of her murder; when looked after by her teacher, her subconscious haunts her via a dream. Candice’s “siblings” spare her having to watch that same teacher’s death at the hands of her mother’s physicalized anxieties, though her classmates are not so lucky. These instances place the blame on Frank, in a way, who, like Nola’s father, failed to protect his daughter from danger.

Frank ultimately saves his daughter by strangling Nola, a scene which is juxtaposed with images of the brood attacking their daughter. Candice, as is typical during a divorce between two parents, carries her own anxieties as well as those of her parents. This inherited mental burden becomes physical in the final scene when we see budding broods on the arm of Candice.

All in all, this is a must-watch film for fans of Cronenberg and body horror. The Brood transcends its budgetary limitations—approximately $1.5 million but earning $5 million at the box office in a huge win for the Canadian Tax Shelter system—through the excellent performances of Samantha Eggar and Oliver Reed, the score of Howard Shore, and the impressively disgusting effects of the legendary Rick Baker. Cronenberg’s early work may feel a touch dated and cheap to the modern eye, but the audacity of The Brood, Shivers (1975), and Rabid (1977) exemplify the director’s budding genius.