Hospitals are scary places. Yes, the hallways we walk down to visit loved ones are often painted brightly with large windows where daylight streams through. But try to wonder what the secret areas of hospitals might be like. Imagine long, lit paths where light from the outside world doesn’t reach. Where every creak and scrape can come from who knows where or who knows from whom. Imagine that feeling during a power blackout, and imagine it’s your first time in that area.

You wouldn’t want to even imagine that, but there’s no doubt that Corinna Faith, writer, and director of The Power, has. From that angle, she has made a movie part M. Night Shyamalan, part Ari Aster, and part Mike Leigh, yet originally hers. For a movie that on its surface looks like it might be a haunted hospital yarn, it goes deeper as it explores themes of trauma, workplace discomfort, and women not being believed when coming forth to document abuse.

The Power (a title we learn later can refer to electricity, to spirits consuming the living, and to authority attempting to silence women) takes place in London, 1974, where disputes between government and trade unions have forced citizens to conserve power at night. The movie opens with Val (a fearless Rose Williams), a timid nurse working in pediatrics, in a large foreboding hospital. Memories of an incident where she was trapped in a confined dark space with a much older man when she was younger torment Val. We don’t learn what occurred in that space, but when she made others aware of it, they dismissed her claims as a figment of her imagination. Now she lives with a stigma of making up falsities. 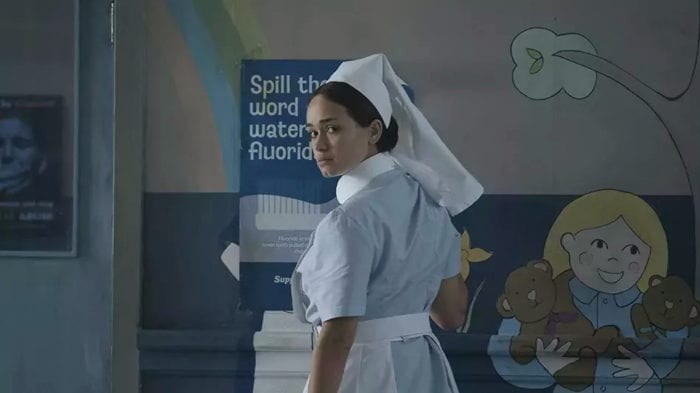 Val starts her job being dressed down by a stern hospital director of nursing (Diveen Henry), who could give Nurse Ratched a run for her money for enforcing the rules in a hospital. Right away, the director of nursing takes a disliking to Val. Only when she encounters Doctor Franklin (Charlie Carrick) does she feel a bit more at ease. Val also encounters a shy 13-year-old girl named Saba (Shakira Rahman) who understands the hospital has many secrets and will torment anybody who stays.

When the doctor takes an instant liking to Val, this displeases the matron who then forces the young timid nurse to work the overnight shift during the blackout. As has been established, Val is still haunted by an incident involving darkness and strangers, but out of fear of making the matron cross with her, she agrees to stay on.

When the hospital goes dark, the creepiness sets in, and with nothing but a handheld lamplighter, Val has to make her way through long, sinister hallways to her assigned ward. There she encounters an old nursing school chum, Babs (a wonderful Emma Rigby), who’s just as snotty as the matron and is quite amused by the quiet, mousy Val. Babs likes to spend the nights hanging out with a menacing co-worker who looks like they could consider him to join the Droogs from Stanley Kubrick’s A Clockwork Orange. Babs and the man like to dance around the catatonic patients in their beds, and Val watches with disillusionment. Her night is about to get a lot more creepy. 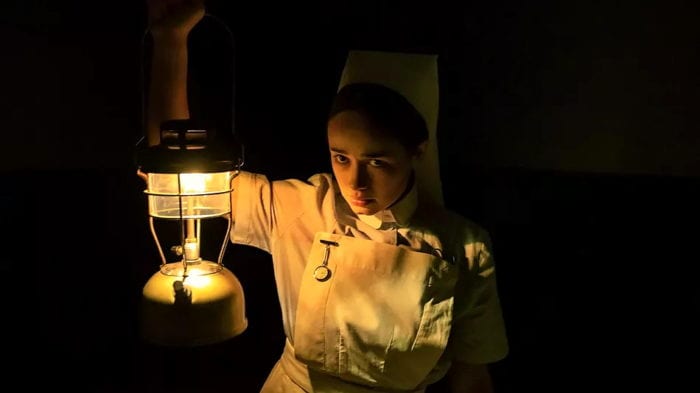 Val spends most of the night getting pulled and knocked around by a wrathful entity, besides being belittled by staff and leered at by security guards. Amid her frightening shift, she encounters two other nurses who have a hard time believing Val’s warnings or pleas for understanding that something malevolent is happening within the hospital walls. Keep in mind, this was the first half of the ’70s so checking the security cameras to see if Val is truthful is not an option. Plus, Val has a reputation for “making things up,” a reputation that has gotten to the hospital before she has.

The only ally Val has is young Saba, herself haunted by traumatic memories. Saba is more distrustful of the older hospital staff, and even the good hospital workers don’t live up to that initial impression. The hospital itself has overwhelmed an already fragile Val during her night, and when daylight arrives, she feels no safer than she did in the creepy darkness.

Corinna Faith (The Innocents) does a deft job at balancing many themes into a “clang-in-the-dark,” wrathful entity horror film. The hospital Val arrives to work in is devoid of color except for the yellow glow of lamplight. Even the rainbow-painted children’s ward is dreary. It’s not a place where anybody would want to spend any amount of time. Once the power is shut down inside, there are only a lamp and candlelight to light one’s way. Faith, along with the wonderful cinematographer Laura Bellingham (who will be going on to bigger projects once directors see her work here), does a masterful job at creating dread in this run-down setting. You can almost smell the dourness in the air just from the visuals alone. Their camera remains stationary mostly, perhaps a nod to Kubrick’s The Shining, and avoids hand-held jerky camera shots which a lot of horror movies utilize. Not that handheld can’t work incredibly effectively, as it does so well in the original Texas Chainsaw Massacre), but most of the time, they just remind audiences they are watching a movie instead of being involved in the screen action. There is such a thing as over-directing, and it’s great to see Faith and Bellingham avoid that trap. 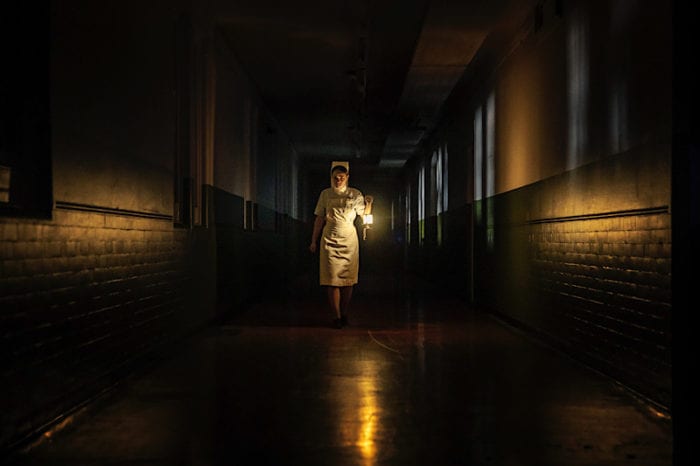 Also great is the production design by Francesca Massariol, who does a remarkable job at creating an environment nobody would want to spend any time being in. I mean that as a compliment. All these women created a movie that’s not only an effective “monster-in-the-closet” scare-fest but also a movie that understands darkness can be the most frightening thing in our world. Recently, I came across an online survey for women which asked the question, “If you were a man what is the one thing you’d like to do?” The number one answer provided by women was, “go for a walk alone at night.”

The Power is a movie that understands the feeling of being afraid of not just the dark but also the dangers which come alive during it. It’s a movie for those women afraid to walk alone at night made by women whose two heroes are women. It’s something we’ve been seeing more in horror. Let’s hope that continues.

The Power premieres exclusively on Shudder on April 8th. 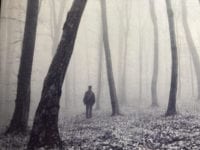