Guillermo del Toro is somewhat of an anomaly in the horror community. While he’s one of the best and most beloved filmmakers working in the genre today, he also tends to shy away from the things most people usually associate with horror. For example, his movies aren’t overly gory and they often have more tender character moments than scares. So why is del Toro so popular? If he doesn’t make typical horror movies, why is he so beloved in our community?

The easy answer is that horror fans have much broader tastes than people often give us credit for, and that’s definitely part of it. Hardcore horror lovers enjoy all sorts of horror, not just the scary and gory kinds, so it’s actually not too surprising that we embrace Guillermo del Toro as much as we do.

However, I think there’s another reason as well, one that has to do with a unique theme that sets him apart from almost every other horror filmmaker around. Most horror movies make their monsters the bad guys and their humans the good guys, but del Toro’s films usually reverse that pattern. In his films, the monsters are almost always the protagonists, and he likes to contrast them with normal-looking humans who are true monsters on the inside.

This theme pops up again and again throughout his entire filmography, so let’s explore it a bit and see what it’s all about. I normally like to divide del Toro’s work into three main categories (Spanish-language, American drama, and action), so let’s take a look at one movie from each category and see how his films express this theme in different ways. When we do that, we’ll be able to better understand why he’s such a beloved figure in the horror community. 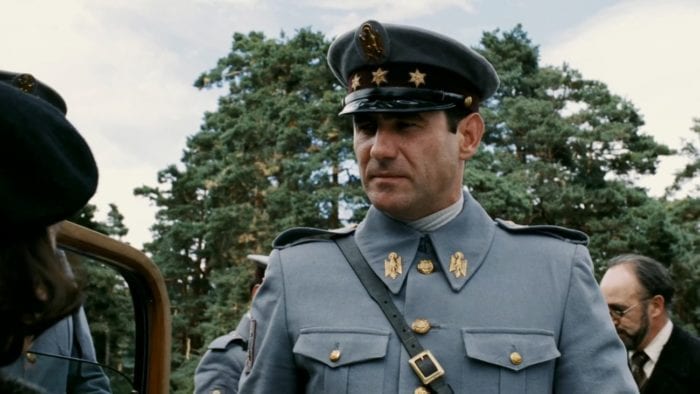 Until just a few years ago, the Spanish-language movie Pan’s Labyrinth was probably most people’s favorite Guillermo del Toro film. It’s since been eclipsed by The Shape of Water in many people’s eyes, but in my book, it’s still his best. It’s set during the Spanish Civil War, and it’s about a young girl named Ofelia whose mother has recently married a falangist military officer named Captain Vidal.

When the movie begins, Ofelia and her mother travel to the captain’s camp to go live with him, and soon afterward she meets a mysterious faun who tells her she’s the reincarnation of an ancient underworld princess. She’s destined to return to her true home, and the faun gives her three tests she must pass to fulfill that destiny.

This faun is an ugly creature, with a human torso and the legs of a goat. He has an oddly shaped face, strange spiral marking above his eyes, and big, devilish horns on his head. When you first meet him, you can’t help but wonder if he’s telling the truth. He looks more like a demon than the benevolent messenger he claims to be, so it’s tough to trust him. Ofelia does, but you’re not so sure.

In contrast, Captain Vidal has all the trappings of a classic good guy. He’s handsome, he enjoys the finer things in life, and he follows the rules of etiquette flawlessly. If you didn’t know any better, you’d think he was destined to save poor, gullible Ofelia from the lying schemes of the evil faun.

But you’d be wrong. While the faun may look like a monster, he’s actually exactly who he says he is, and he only has Ofelia’s best interests at heart. Conversely, Captain Vidal is just as ugly on the inside as the faun is on the outside. He consistently shows a complete and even nonchalant disregard for human life, and he ends up being the real villain of the movie.

With these two characters, Guillermo del Toro brilliantly flips the script on us and subverts all our expectations about beauty and virtue. We normally expect a character’s outward appearance to match their inner character, but del Toro teaches us that physical beauty really is only skin deep. He shows with striking clarity that we should never judge people solely on how they look. Instead, as with the faun and Captain Vidal, we need to consider who they are on the inside, and when we do that, we’ll often find that our first impressions are entirely mistaken. 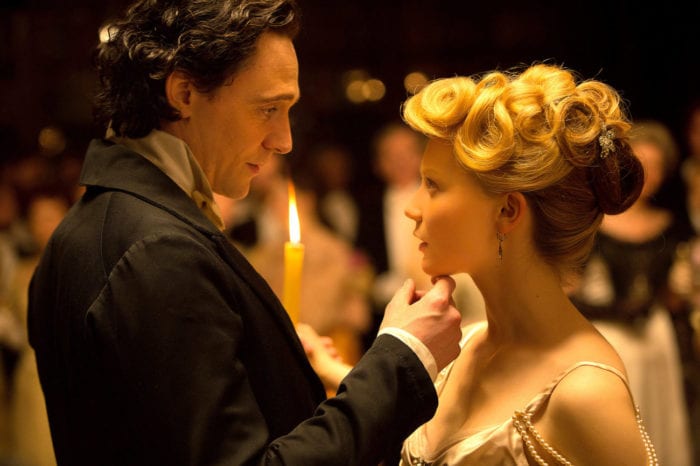 Crimson Peak was the first of Guillermo del Toro’s American drama films, and it’s about a young American woman named Edith Cushing who falls in love with Sir Thomas Sharpe, a British baronet who has come to the United States seeking investors for a new invention of his. They get married and move back to his gothic mansion in Britain where his sister Lucille also resides, and while there, Edith unravels a mystery about the Sharpe family that makes her stomach churn.

Throughout the film, Edith has numerous harrowing encounters with terrifying ghosts, and much like Pan’s Labyrinth, this movie also intentionally contrasts these hideous monsters with its handsome and charismatic lead. Thomas Sharpe is played by Tom Hiddleston, so he brings all the smooth charm and elegance to the role that you would expect, easily making Edith fall in love with him.

In contrast, the ghosts in this film are absolutely horrifying. In fact, they look more like demons than mere ghosts, so it’s easy to think that Thomas is supposed to save his new bride from the evil spirits that have chosen her as their next target. But that couldn’t be further from the truth. Thomas and Lucille end up being the real villains of this movie, and the ghosts are actually trying to help Edith. Some of them warn her about the dangers she’ll face with the Sharpes, and others lead her to uncover the sickening truth about her new husband and his sister.

On top of all that, Crimson Peak also adds a little wrinkle to this theme, setting it apart from Guillermo del Toro’s other films. In the third act, Thomas repents of his evil ways and tries to make things right with Edith, and when Lucille finds out, she feels betrayed and murders him. She then sets her sights on her sister-in-law, but in the midst of their big fight, Thomas appears as a ghost and helps atone for his sins by distracting Lucille long enough for Edith to kill her.

With that ending, Guillermo del Toro encapsulates in a single character the theme of humans as bad guys and monsters as good guys. Thomas Sharpe starts out beautiful on the outside but ugly on the inside, and when he changes from villain to hero, he also loses all his good looks and turns into a hideous ghost. He spans both sides of this typical del Toro divide, so he’s a microcosm of the entire theme, emphasizing it further and expressing it in a unique way. 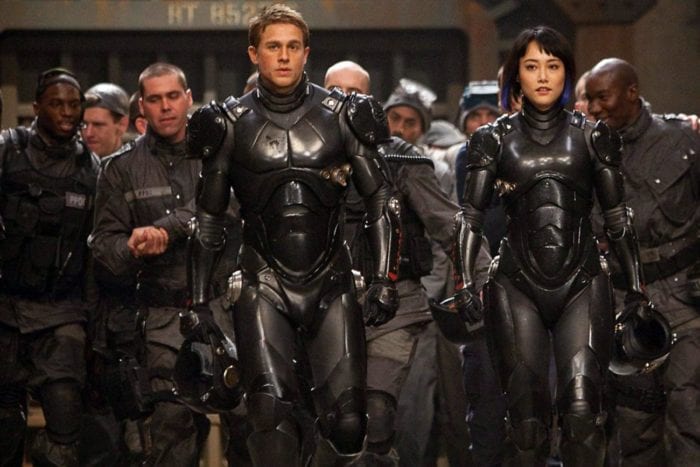 When we come to Guillermo del Toro’s action films, we find that they don’t express this theme nearly as clearly as his other movies. They all feature monsters as their antagonists, and Pacific Rim is no exception. It’s about giant monsters fighting giant robots, and the monsters are the bad guys in this story.

But that doesn’t mean these movies buck the trend entirely. While they lack half of the characteristic del Toro theme we’re looking at here, they still retain the other half: their protagonists are also monsters. This is easiest to see in Blade 2 and the Hellboy franchise, but it’s a bit obscured in Pacific Rim. The only monsters in this movie seem to be the kaiju that attack the earth, and the good guys are all humans.

However, if we pay close attention to the film, we can see that it’s actually a bit more complicated than that. The movie starts with a prologue that recounts the history of the human-kaiju war, and when it gets to the creation of the jaegers (the giant robots), earth’s main weapons against its invaders, the narrator utters a very important line that tells us what these machines really are: “To fight monsters, we created monsters of our own.” With these words, Pacific Rim is clearly telling us that it considers the jaegers to be monsters, so it does in fact touch on the theme of monsters as good guys. It simply does so a bit more subtly than del Toro’s other action movies.

And that, I would suggest, shows us how important this theme really is for Guillermo del Toro. He didn’t need to put that line in the film. He could’ve very easily just let Pacific Rim be a fun blockbuster about humans fighting giant monsters, but he wanted it to be a little bit more than that. He went out of his way to work the theme of monsters as good guys into the script, so this theme must be very near and dear to his heart.

Why We Love Guillermo del Toro

When we put this all together, we can see why Guillermo del Toro is so beloved in the horror community: we see ourselves in his movies. In a lot of ways, horror is an outcast genre. It’s usually seen as lowbrow and unsophisticated, and “respectable” society has trouble understanding what could possibly make us enjoy these films so much.

In other words, we’re the monsters in del Toro’s movies. We’re the misunderstood misfits that he shows so much love for. We’re different from everyone else, but that doesn’t make us bad people. Our cinematic tastes don’t make us any better or worse than anybody else, and Guillermo del Toro understands that.

Every one of his movies expresses this, but they do it in many different ways. Some of them, like Pan’s Labyrinth, present the idea in its purest form. They give us a benevolent monster and a handsome villain, and they show us that we shouldn’t judge people just because they’re different from us. Some others, like Crimson Peak, add a few creative touches to this basic formula, and still others, like Pacific Rim, contain just the barest hints of it.

But however del Toro’s movies convey this theme, we horror fans always love it, even if we don’t always consciously understand why. Even if we’ve never noticed it before, I think a lot of us intuitively grasp it and appreciate it because it accurately captures our own experiences in a way that few other filmmakers can. We recognize ourselves in del Toro’s monsters, and we love him for standing up for us and telling the world that our different tastes and sensibilities don’t make us any worse or any less worthy of love than “normal” people.