Directed, written, and starring Jeremy Gardner, After Midnight is a smaller story than most horror films these days. It’s a man dealing with his emotions, and also sometimes a monster is there. Is the monster real? Or is it a metaphor? (Why not both?) Hank is a 30-something redneck who owns a bar with his girlfriend of ten years, Abby (Brea Grant). Abby has just left him, and he’s depressed, drinking pretty heavily. He lives in a big old house in the middle of the woods and clearly spends most of his time sittin’, thinkin’, and being sad. Which is kind of a mood. As quarantine goes on, I find myself really leaning more and more towards these contemplative features. I am also doing a lot of sitting and thinking right now!

The film cuts back and forth between Hank’s nightly routine of getting drunk and attempting to kill this mysterious creature that shows up outside his door and happier times with Abby. You get a pretty good picture of their relationship, and it’s honestly pretty sweet. They seem like they have a lot of fun together, and I’m a romantic sap so this got me pretty easily.

Hank seems pretty broken up about this, and we obviously feel sympathetic to him. How could Abby leave him? He seems like such a nice guy! Two sides to every story though. For the majority of the film, we only get his perspective, but Abby’s point of view peeks in more and more as time goes on.

As with all relationships, there are going to be issues. Do you know what the biggest problem with people, that comes back again and again in both my writing life and my non-profit work? Communication. So much of what we go through could be dealt with with a lot less anguish if we just talked and actually listened. And that’s totally the case with Hank and Abby.

Abby clearly feels like things are going too slow. A friend announces her pregnancy, and you see her face fall. I’ve never wanted kids myself, but the mid-30s does seem like the “oh sh*t I should probably be having kids” time for a lot of people. Hank seems perfectly content with the way things are going, so we kind of get the idea that Abby left because of this. 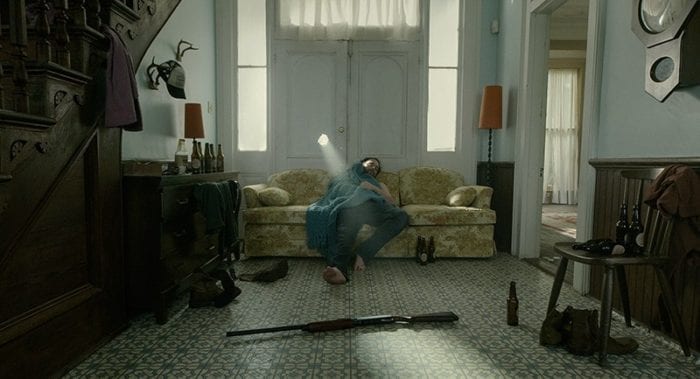 He spends most of the time in this state, the couch pushed up against the front door, gun at the ready. Almost like he is guarding the house for Abby’s hopeful, eventual return. The rest of the house feels almost “off-limits” while she’s gone because his life is meaningless without her. Am I reading too much into this?

Adding to this downer of a mood, Hank’s friends don’t believe that there’s a monster outside his house. Abby’s brother, Shane (Justin Benson!), who is a cop, shows up to chastise Hank for shooting at random cars on the street (fair, maybe don’t do that) but dismisses the huge scratches on the door as signs of a black bear. The signs are there, but you’re not listening to Hank. Honestly, I started thinking, this is Hank’s cry for help. It doesn’t matter if there’s a monster or not, the dude is clearly suffering and needs a friend. Shane also kind of blasts him a little about not marrying Abby sooner. “We’re practically family! We should be family already if you just married my sister.” Not really what you want to hear when you’re in the throes of a breakup.

Thankfully, Hank has his old friend and drinking buddy Wade to cheer him up a little. Wade is my favourite part of the whole film. His dialogue is hilarious, and he rambles about aliens and squids he saw on TV, which is something I can see myself doing, but also reminds me that when you’re feeling really low just having someone say things to you (no matter how ridiculous) distracts you from the pain. Wade is a good friend. He also hesitantly agrees to help Hank look for the monster, which is more than anyone else does.

I wasn’t expecting it to take this turn, but Abby comes back. Turns out she just went to a reunion, one Hank knew about and didn’t want to go to. She then hung around Miami for a month and enjoyed all the things you can’t get in a small hick town, like sushi or live music that doesn’t involve banjos. The climax of After Midnight isn’t a huge monster fight, it’s just Abby and Hank talking with each other candidly about their life together. It’s a straight-on shot that feels awkward because of how personal it is. You’re really getting an inside look at the relationship between these two people, and it feels intrusive, personal.

But at the same time, I was cheering a bit for them to finally have this hugely important discussion. Yeah sometimes I can kind of tell what my significant other is thinking simply because of how long I’ve known them, but nobody’s a mind reader. If something’s bothering you, even if you’d rather be dealing with a literal monster hiding in the woods, you should probably talk about it. 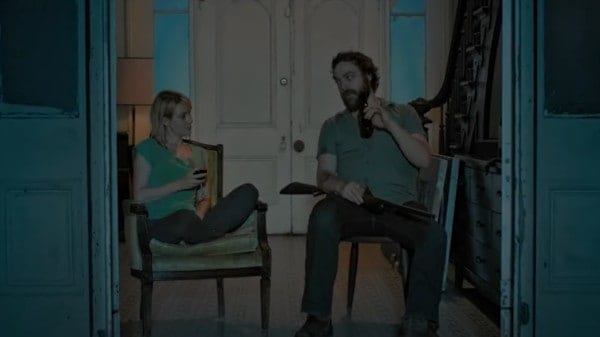 So Hank steps up. Proclaims in front of all their friends that it doesn’t matter where they live, as long as he has Abby in his life that’s all that matters. Change is hard, but he’s willing to try for her. Then the monster shows up and he promptly murders it in an impressive show of force. Quite a grand way to end the movie, but it felt very cathartic. Hank destroys what’s plaguing him and is ready to move on to the next step in his life, with Abby. If only all issues could be dealt with as literally!

After Midnight is not for everyone, but I enjoyed it. I always like seeing horror used to tell stories in different ways. It feels personal, and, considering Jeremy Gardner wrote and starred in it himself, maybe it was cathartic for him too.

After Midnight is a Shudder Exclusive premiering February 11th. (US only.)