The horror genre is not an easy genre to survive. Even some of the most determined characters meet the grim reaper in the end, thanks to ambitious bloodthirsty writers looking to fill kill counts or who live on the mantra “no one is safe.” Previously, I’ve covered Horror Movie Victims Who Should’ve Survived, in which I listed the characters who, despite their best efforts, didn’t make it to their respective film’s end credits. I wanted to take this next entry in the “Horror Victims Who Should’ve Survived” series in a new direction and instead focus on characters from horror television shows who were so close to making it out alive before death came knocking.

Surviving a horror television show is quite a challenge because, unlike an hour and a half film, the TV landscape has more time to play with and torture their characters, and as we’ve seen with cinema, a determination and drive to survive doesn’t always guarantee a character will emerge victoriously. Since I’ll be discussing character demises, and in some cases who killed them, consider this your official spoiler warning. Without further ado, lock your doors and grab that kitchen knife. Here are Horror TV Victims Who Should’ve Survived. 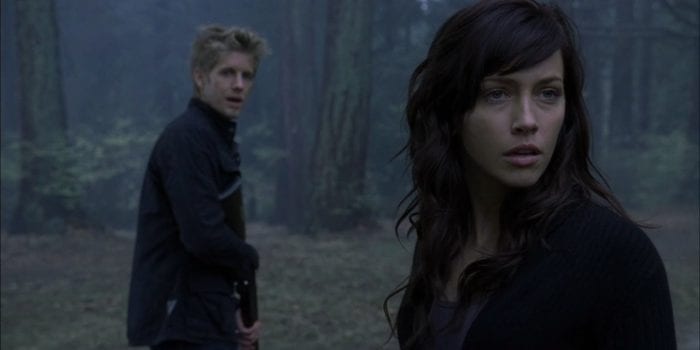 Harper’s Island is an underrated horror-mystery slasher that ran for one season on CBS. The series follows a group of family and friends who travel to the titular island for Trish’s wedding to her childhood sweetheart Henry Dunn, only to find themselves getting picked off one by one in gruesome fashion. Played by Katie Cassidy (who’s no stranger to unfair deaths), Trish is the radiant bride-to-be. Despite growing up with immense wealth and privilege, Trish is a well-rounded character. She’s funny and kind, and she’s not jealous over the friendship between Henry and his best friend (and final girl!) Abby Mills. Despite her family’s disapproval of Henry’s lack of status and prestige, Trish never wavers in loyalty to her beloved, even when her father enlists her ex-boyfriend to crash the wedding and try and win back Trish’s heart.

Things start to unravel for Trish when she witnesses the gruesome death of her father during a wedding rehearsal, and it doesn’t take long for the guests to realize a killer is in their midst. Trish naturally mourns for a short while before pulling herself together. She knows there will be time to mourn later. For now, survival is the name of the game. Trish rallies the other survivors and arms herself with a shotgun. She has several run-ins with the killer as she and her friends and family attempt to escape the island, but she emerges relatively unharmed each time. It seemed that Trish and Abby would survive the bloody nightmare of Harper’s Island, but the brave bride-to-be met her end in the second to last episode of the season at the hands of none other than her loving fiancé Henry. Trish only needed to survive one more episode, but at least the show gave us the iconic image of her running through the forest in her wedding dress. You were so damn close, Trish. So close. 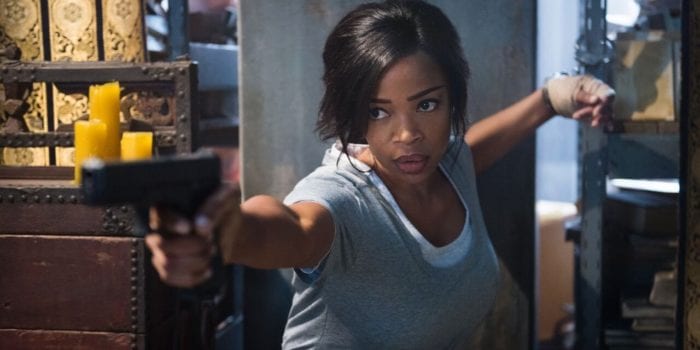 The list of characters cut down before their prime is expansive, especially in an age where killing off major characters is the norm. No list would be complete without Amanda Fisher (Jill Marie Jones), a detective and major character in Showtime’s Ash vs. Evil Dead who joins Ash in hunting Deadites after the gruesome murder of her partner. Believing Ash is initially responsible, it doesn’t take long before Amanda is forced to confront the reality of Deadites, and she becomes a staunch ally of Ash and his friends in their never-ending fight against evil. Despite her initial judgments of Ash, Amanda can’t help but fall for the man after they survive several near-death experiences, and the two do have some cute moments together throughout the first season. Amanda seemed poised to become a valued member of the team, but in the season finale, she’s ambushed by Evil Ash in the famous cabin from the first film. After a struggle, he hurls her into the antlers of a deer head that fell from the cabin walls.

The real Ash reunites with Amanda, and the two share a last kiss before she dies. To add insult to injury, Amanda rises as a Deadite, though Ash and his friends kill her for good. Amanda’s demise was so disappointing because she had way more stories to tell. Her entire life was turned upside down by the Deadites, but future seasons could’ve followed Amanda as she becomes a skilled hunter alongside Ash. Ultimately, this is Ash’s show, but Amanda deserved more than to be killed to advance another character’s narrative. 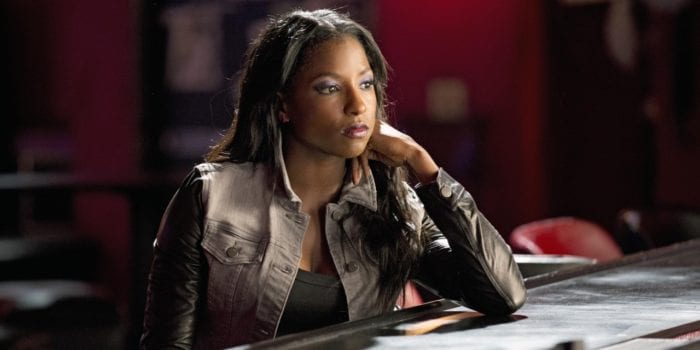 Tara Thornton might’ve been a side character in the novels the popular and steamy HBO vampire series is based on, but in the show, Tara (Rutina Wesley) is set up from the get-go as a significant player. She’s Sookie’s best friend and Lafayette’s cousin, and she was given plenty to do and always had her own storylines. She’s intelligent, honest, and brave, and despite the constant tragedies True Blood always flung her way, Tara emerged to fight another day. Her distrust of vampires was always a source of contention between her and Sookie, but Tara never allowed their disagreements to stop her from saving Sookie’s butt on several occasions. The show very nearly offed Tara in Season 4 when she’s shot in the head trying to save Sookie, but this wasn’t the end for the determined heroine. In Season 5, Pam turns Tara into a vampire to save her life, enraging Tara, who blamed her friends for turning her into something she hated without her consent.

However, Tara soon adjusts to her new undead existence and begins a relationship with Pam. Unfortunately, Tara wasn’t given much to do beyond that point, and Season 6 relegates her to the sidelines. To make things worse, Tara is killed mostly offscreen in the first few moments of Season 7 when infected vampires attack Bon Temps. Talk about an offensive and appalling death. Was it really that hard to give Tara a happy ending after all she endured?

The Following is a violent and dark series about an FBI agent Ryan Hardy (Kevin Bacon), who hunts for a serial killer named Joe Carroll only to discover Carroll has a massive cult at his beckoned call. Even in prison, Carroll’s influence ranges far, and many seemingly innocent people are involved. The Following‘s first season was a wild ride, with many characters biting the dust before the show’s cliffhanger ending. One of the people who met their grisly end was FBI specialist Debra Parker (Annie Parisse), whose warmth and kindness brought some much-needed light to the series. While early episodes hinted that Debra might be in league with Carroll’s cult, she soon proves her loyalty and innocence and becomes a vital ally to Ryan. Her own experiences with growing up in a cult help give Debra a unique perspective and add layers to the character. It was easy to see how much she brought to the overwhelmingly depressing series, but as this list proves, no one is safe in horror.

At the end of the first season, Debra is kidnapped by Carroll’s cultists and buried alive in a coffin in the woods with only a cellphone. With the minutes ticking away and her oxygen depleting, Debra has just enough time to call Ryan and express regret she never made amends with her family. Ryan and his partner Mike arrive at the spot where Debra is buried, only to find her lifeless body inside the coffin. Ryan tries to resuscitate her, but it’s too late, and Debra is declared dead. Right from the first episode, The Following proved that no one was safe, no matter how likable they were. Debra’s demise was horrifying, but her presence lived on in the show, and Ryan never forgot the brave and kind agent. 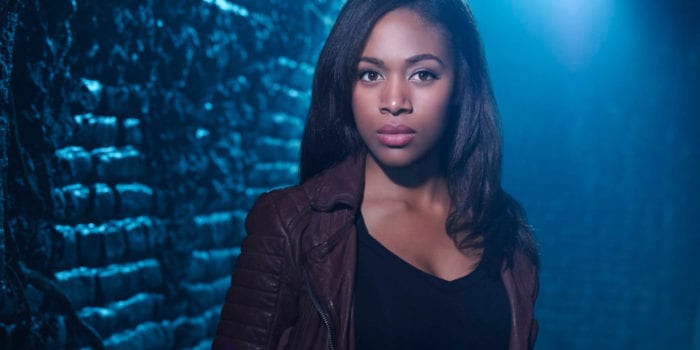 Let’s get this out of the way right off the bat: Nicole Beharie was treated horribly behind the scenes while portraying police officer Abbie Mills in Fox’s supernatural horror drama, Sleepy Hollow. In fact, the production team labeled Beharie challenging to work with and threatened her career after she and her co-star both became sick. Their racist treatment of her eventually led them to kill off Abbie later in the series. Sleepy Hollow follows Ichabod Crane, who wakes up in the present-day Sleepy Hollow and forms an alliance with Abbie to fight the hordes of evil and prevent the coming apocalypse. Abbie was a fantastic character. She was vocal about her fears and doubts, but they never stopped her from helping others and saving the day. She and Ichabod worked well together and valued each other’s input and ideas.

Abbie seemed to be around for the long haul as the series co-lead, but Season 2 brought Ichabod’s wife Katrina into the fold and Abbie was relegated to the sidelines. In the show’s third season, Abbie dies when she sacrifices herself to save the world. Her death was met with intense negative reactions from fans. The network tried to say that Beharie wanted out of her contract early, but in later interviews, Behaire revealed she left because of an autoimmune disorder and the horrible treatment she endured from the showrunners.

“My co-star and I were both sick at the same time, but I don’t believe that we were treated equally,” Beharie told The San Diego Union-Tribune. “He was allowed to go back to England for a month while I was given Episode 9 to shoot on my own. So I pushed through it, and then by the end of that episode, I was in urgent care. And all the doctors, including the doctors that the studio was sending, were all confirming, ‘Hey, she can’t work right now.'” Beharie’s condition continued to worsen, forcing production to shut down for two weeks. She received no support and was labeled a trouble-maker. She later said, “Sometimes I think that some people I was working with didn’t like that I was unwell but loved by the audience,” she said. “I would think they’d support that. But every one of color on that show was seen as expendable and eventually let go.”

Fortunately, Beharie’s career is far from over, and her roles in Little Fires Everywhere and Miss Juneteenth have been met with critical acclaim. However, her treatment and Abbie’s early demise left fans outraged and in agreement that Abbie (and Beharie) deserved better.

Looking for more about compelling horror TV characters? We’ve got you:

“Kolchak’s Compelling Quest for the Truth”

“Human in a Vampire World: What We Do in the Shadows’ Guillermo de la Cruz”