There are points in every person’s life where they stand back, clasp their fingers together, and question the existence of why they are doing something. It’s a metaphorical crossroads if you will. Unlike the end of CastAway with Tom Hanks, very literally, standing at a crossroads in life, most of us never physically see these literal choices we have to make in life. Either we do it, or we don’t. The repercussions from either decision will come later. I can already hear you getting ready to click away from the article, and that is a choice you might make at this particular crossroad, or you can give me a few minutes to explain how my ethereal thinking goes well with this week’s episode of The Last Drive-In.

In the days leading up to Episode 8, Joe Bob and Darcy had been teasing the Mutant Fam on social media about how this week would test our love for horror. Though coy on what the titles were, what was known was that both movies for this week were direct-to-video and shot-on-video(SOV). With these ominous warnings, a slight pause surely would come over most—are Joe Bob and Darcy trying to break their fanbase? Maybe it’s just a slow week, and they are saving better films for the final two weeks? Then Darcy threw down the gauntlet to test all who consider themselves one of the Mutant Fam: Joe Bob reinstated his Ironman Citation, renamed the Iron Mutant Challenge.

For those unfamiliar with Joe Bob’s Ironman Citation, Joe Bob gathered films designed to scare mortals. In this case, this week’s double-feature consisted of the movies Sledgehammer and Things. Darcy laid out the rules for the Iron Mutant Challenge: you must make it through both films, provide detailed plot descriptions, dissect Joe Bob’s thoughts during the breaks, and link images proving that you were able to tough it out. For those able to stomach this week’s offerings and complete the tasks assigned, an Iron Mutant certificate would be waiting. That’s a heck of a challenge, to be frank, but I consider myself a die-hard Mutant and felt I could withstand all that Joe Bob and Darcy could throw my way.

I’ll be honest; I had reservations about this week’s episode because of the looming threat of how titanically terrible these films were going to be. As the minutes passed leading up to showtime, I had to psyche myself up, repeating the tagline from The Last House of the Left, “It’s only a movie! It’s only a movie!”

The clock struck 6:00 PM PST, the countdown timer on Shudder hit zero minutes and zero seconds: it was time to put up or shut up. I stood at a crossroads and decided to spend the next four hours and twenty minutes (coincidence?) descending into the bowels of madness.

As has been customary for this season, Joe Bob sat in front of the cabin, whittling away. The morsel of wisdom he dispensed tonight, though, seemed more pointed than usual. Tonight’s nugget of knowledge found Joe Bob drawing a parallel between hours in the day and beers in a case: both 24. Though he did not say we should be drinking beer to make it through Episode 8, I can’t help but assume this opening served as a subtle warning for what was about to unfold.

And true to Joe Bob and Darcy’s words, both films on this episode were most challenging to finish. At one point, Joe Bob requests assistance from Chris Jericho via satellite to help motor through Things. 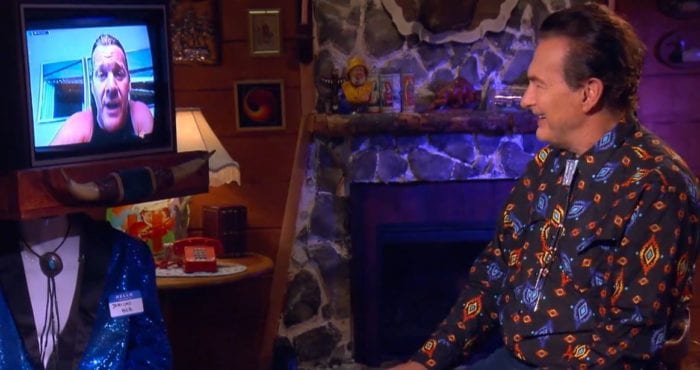 At the same time, though, I’m not going to sit here and bash people for going out and creating a film. I can speak from personal experience that completing a movie, from writing the script to picture lock, is arduous and grueling. And we’re not talking about home movies, but for making a semi-professional film and getting it distributed, even limited, you deserve a round of applause.

The first film of this week’s horrifying double-feature on The Last Drive-In was an attempt at a supernatural slasher. Sledgehammer followed a group of people who party it up at a house in the woods. Fairly standard stuff so far, right? The friends end up terrorized by a tall, silent killer wielding a sledgehammer. Awesome sauce, right? I can hear you saying, “We got us the makings of an ’80s slasher classic!” Well, it wouldn’t be part of the Iron Mutant Challenge if it were that simple—needless to say, the lack of experience with scripting, acting, directing, and especially editing is on full display with Sledgehammer.

I have no desire to pick apart someone’s attempt to create an idea they desired to make. I applaud director David A. Prior for finding a way to see a project through from beginning to end, especially in the 1980s. Considering that Joe Bob and Darcy doubted the Mutant Family’s ability to complete the Iron Mutant Challenge, Sledgehammer went down pain-free, like a warm beer: not vomit-inducing, just not something I want to experience daily.

The one thing that Joe Bob and Darcy mentioned which scared me more than anything else was Sledgehammer being the better half of the double feature. And this brings us to Things.

If Sledgehammer was a warm beer, Things is straight-up 96% cooking alcohol, not meant for human consumption. I have seen on rare occasions where Joe Bob offers warnings before a film begins about how incomprehensible the following move will be. As Things started, none of us could say there weren’t warning signs posted.

To make heads or tails of, let alone decipher what is going on with Things, is futile. With no understanding of how to block a scene, light a shot, or properly ADR dialogue, Things gets off on the wrong foot, then decides to cut the other foot off because why not? From the opening moments, a fully-nekkid woman in a devil mask is willing to give a strange man a baby—Rosemary’s Baby, this isn’t. The film gets preposterously more silly as things move along, becoming a hybrid of Dreamcatcher and early Cronenberg films.

With comments like these, you might think, could this be a diamond in the rough? The short answer is no, and the long answer is, well, no. Going back to what I said earlier, though, I can’t knock anyone who completed a script, hired some actors, got the necessary equipment, and the determination to fulfill what they set out to do. Did I enjoy the movie? Not even close. Things was a good representation of everyday people who stood at their crossroads and decided to take action and make a movie. Who cares if they had the skills or not—they didn’t. The filmmakers made a choice and rode that decision to infamy, with Things labeled as one of the worst films of all time.

Is it one of the worst films of all time? It depends on who you ask. The snobbiest critics will find every fault and pick it apart like a vulture. On the other hand, were Sledgehammer and Things  meant for these critics? Not in a million years! In recent years, both films have found a semblance of an audience that appreciates what the creators have presented. Sledgehammer and Things may not look the part when using words like “art” and “masterpiece,” but who is to say what constitutes art and masterpiece? 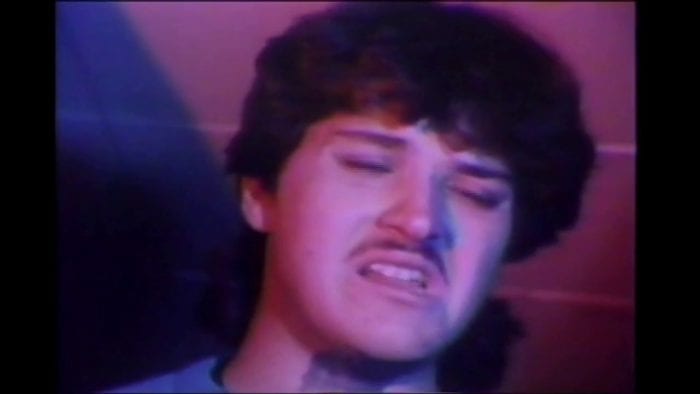 Citizen Kane and The Godfather consistently rank as two of the greatest works in cinema—both lauded as masterpieces by critics and audiences alike. I get it, I enjoy them both, but there are other ways to classify a film as a masterpiece. I feel that Ghostbusters is a masterpiece of timing by getting the perfect script, actors, director, and crew to create a movie that came about by happenstance.

At the same time, that does not mean that every film crafted is a masterpiece. Most aren’t. Or, maybe every creative work is? Who is to say what can and cannot claim as such? Are Sledgehammer and Things masterpieces? That’s for you to decide. However, what isn’t up for debate are the choices that the creators of Sledgehammer and Things made—each looked around at their crossroads and made a decision that changed their life.

On this night, I listened to Joe Bob trying to warn us away, saying Things, in particular, will change your life. Am I a changed man? I’m now a man who watched Sledgehammer and Things in a single sitting, so that has to count for something? Right?

For Episode 8 of The Last Drive-In, I stood at my crossroads, much older than the last time Joe Bob threw out an Ironman Challenge, and decided I still had as much love for horror now as I did back then. My sanity and health fell to the wayside as I chose to prove myself as an Iron Mutant. Was it worth it? Damn straight, it was!