Historically, a witch is often cast as a villain, a threatening woman who embraces power and wreaks havoc on those around her. Robert Egger’s The Witch plays into this stereotype with its vivid depiction of a witch who at different moments embodies a hag, a temptress, and a servant of evil. The family who lives nearby experiences a kind of trauma that plays off of all our negative images of witches. Yet a witch is also the only independent operator of all the female archetypes—virgins, whores, mothers, wives, femmes fatales, and queens are all defined by who they sleep with (or don’t). Only the witch acts with full independence, and that’s why she is so terrifying, so unpredictable to a patriarchal society.

But before they ever meet the witch, Thomasin’s family leaves their village after her father challenges its religious leaders. He says they came to colonial New England for the “pure and faithful dispensation of the Gospels” and calls the community false Christians. The Church banishes him for his prideful conceit, forcing the family to live independently. The father sees no problem in this; he believes having his own homestead will allow his family to live a humble life of the Lord. 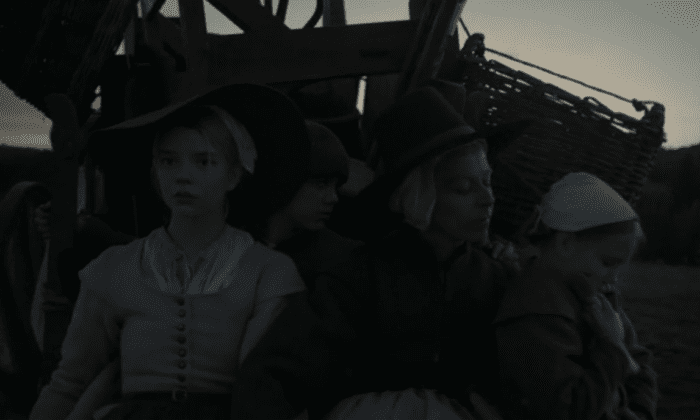 An Ascetic Life in the Patriarchy

The days become grueling as he, his wife, Thomasin, Caleb, the twins, and the baby build a farm for themselves. Their only company lies in each other and their animals, including one black goat that the twins name Black Phillip (a surprising villain). Thomasin’s parents burden her with endless tasks, including the care of her four younger siblings. Though she carries out her parents’ law readily and without complaint, her prayer one morning reveals her inability to follow her father’s will: “I have broken every one of thy commandments in thought. I know I deserve all shame and misery in this life and everlasting hellfire.”

The movie predicates itself on the paranoia and shame that can corrode people from the inside out. Thomasin is a teen girl living in a highly oppressive family. A child caught growing into a beautiful woman, she’s abused by her family and then loses control because it is too much for her to process.

When Thomasin’s mother tasks her with watching the baby, she plays peek-a-boo with it on the edge of the woods. After playing for some time, she opens her eyes to see he has disappeared. The movie cuts to a montage: an older woman in a red cloak holds the baby by firelight and brings a knife to its belly, then she muddles a bloody substance in a large pot and proceeds to wipe the concoction all over her body. Finally, she takes her broom out under the full moon and flies under the night sky. The baby, we can presume, has been used as an ingredient in her flying potion. 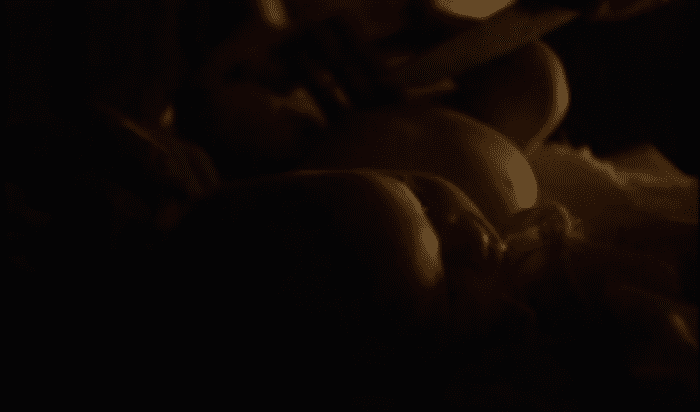 Meanwhile, the family begins to fall apart. Thomasin’s mother accuses her of carelessly losing the baby. Can you blame her reasoning? Thomasin’s beauty is apparent, despite how she hides her flaxen hair and porcelain skin under plain clothing. Caleb peaks at her cleavage while she sleeps, and her parents desperately consider selling her, deeming her too dangerous to keep. She has the seductive temptation of a witch. Because of that, her family is quick to suspect her when things go awry. Since all devilish witches start as unruly girls, her family assumes that she would rather work with Satan than commit to her respectable, Christian upbringing.

Women as the Church’s Scapegoats

But it is her father who put the shackles of biblical literalism on the family. It’s his will that led them to live these merciless days by the witch’s forest. That he blames Thomasin for his shortcomings and misdeeds is a shrewd allegory for the witchhunts in puritanical New England. Fear of the diabolical figure of the witch was a strategic response in medieval Europe to the educated classes’ renewed interest in Greek and Arabic texts about ceremonial magic.

The Church worried that these occult influences would dismantle their power over western Europe. They began to frame these texts as demonic and smeared those who practiced religions outside Christianity as devil worshippers. Elderly women were typically accused of satanic inclinations, so tens of thousands of women were burned, drowned, or otherwise punished for witchcraft—all to protect against threats to the Church’s power. With Thomasin growing to represent a threat to Christian livelihood, she too becomes a scapegoat for their misfortune.

The family cannot grow their own food, and the father realizes they will not last the winter. He and Caleb must go into the woods to hunt. Caleb recites his lessons about the “corrupt nature dwelling within him.” He then asks if his baby brother was born a sinner. He demands to know why his mother will not stop praying for her son. He questions what wickedness a baby might do not to be able to enter God’s kingdom. His father tells him he cannot promise who will enter Heaven and who Hell, offering his son no sympathy or solace.

Caleb, like his sister, harbors doubts about his parents’ philosophy. When he and Thomasin later enter the woods on their own, the two become separated, and Caleb stumbles upon the witch’s hut. She emerges from her home as a glamorous brunette and kisses Caleb fervently (she must have known about his sin of lust). When Caleb returns home later, he is naked and feverish, and his jaw is closed shut. His parents pry a rotten apple from his mouth and pass hours praying and bloodletting throughout Caleb’s frenzied babbling. Eventually, he dies. 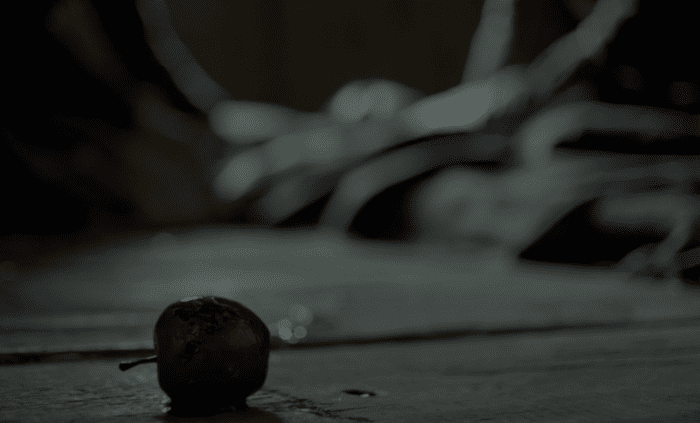 The mother accuses Thomasin of bewitching her brother. Her dad turns on her as well, citing that she was with Caleb when he went missing. Thomasin in turn accuses her father of hypocrisy in his Christian teachings and of being unable to farm or hunt. He tells her the devil speaks through her. She blames the witchcraft on the twins, saying that they talk to Black Phillip when no one is around.

With two children dead and his wife’s sanity crumbling, the father locks up the twins and Thomasin in the goat pen. Chopping wood at night, he laments that he’s infected with the filth of pride. He asks the Lord to redeem his children, whose natural evil he cannot tame. Though he has a moment of clarity surrounding his fault in his family’s demise, he doesn’t turn away from his Puritan beliefs. There’s little room for nuance. He doesn’t consider the harm his ascetic lifestyle had on his children.

Things only escalate when the witch arrives in the pen, alarming the children. In the morning, the father walks outside to find that the gate is split open, the white goats are dead, the twins are gone, and Thomasin is on the ground. The violence only crescendos as Black Phillip rams the father in the stomach, and the mother attempts to choke Thomasin to death until she axes her head in self-defense. Alone on the farm and traumatized by losing each of her family members to a tragic end, Thomasin holds her dead mother crying. 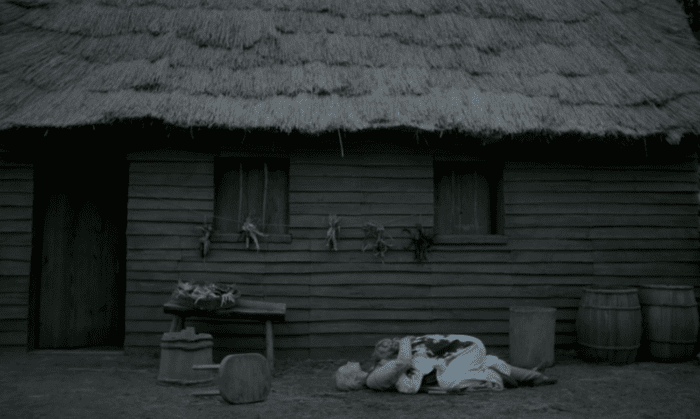 Then Black Phillip offers Thomasin the chance for a new life—one as a witch in the woods. After her experience in her Puritan family, of course, she goes. The VVitch can be read as an allegory about patriarchal and religious oppression that punishes women for men’s actions. Thomasin lives in a culture that casts the vagina as the devil’s playground and the gateway to hell. Of course, a woman in that culture feels herself to be built up around a core of existential shame. When Black Philip offers her (in the film’s most quoted line) the chance to “live deliciously,” of course she goes. Her choice is an act of reclamation, an expression of female autonomy and pride.

Thomasin walks deep in the woods to find a ring of frenzied women dancing naked around a fire. Compare this frenzied bacchanal to her barren Christian life before. It’s a world of ecstasy, possibility. A friend once told me after quitting his job in Silicon Valley: “I didn’t know what was next. All I knew was, ‘anything but that.’” Thomasin, perhaps, has a similar sentiment: she was already in hell, and she wanted anything but that. So she dedicates herself to the devil, becoming his willing servant after he provides her with a chance at emancipation. After what she’s been through, trading her eternal soul doesn’t seem like that steep of a price. 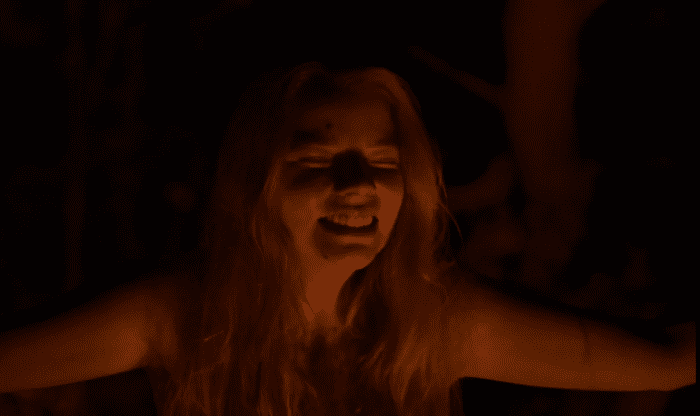 Some interpret the ending as a false liberation. Others see it as the story of a girl manipulated into doing the Devil’s bidding. I think these interpretations do a disservice to what Thomasin experienced, to the entrapment she experienced under her parents. Becoming the Devil’s servant is voluntary on her part and an agreement to do his bidding in exchange for power and luxury. The witches in the woods may be the antagonists, but they seem to be the most liberated of all. The last shot shows Thomasin laughing, joyous, having fun for the first time. She levitates in the air with her arms extended out, experiencing a kind of resurrection her parents could never imagine. Her face lights up not from being burned at the stake, but from the blaze of her own inner fire. It is witchy liberation at its finest.

Looking for more about The Witch? We’ve got you:

“The Witch Is a Brilliant Cautionary Tale”

Brianna Di Monda is the Assistant Managing Editor at MAYDAY. Her fiction and criticism have appeared in The Summerset Review, The Cleveland Review, Thin Air, and GLITCHWORDS, among others. She was nominated for the 2021 PEN/Robert J. Dau Short Story Prize for Emerging Writers.