When Ash vs Evil Dead came out back in 2015, fans loved it. It was seen by many as an almost perfect way to revive the Evil Dead franchise, and a lot of us particularly enjoyed the show’s portrayal of its aging, washed-up hero. He was just like we remembered him—only now he was about thirty years older, a few too many pounds heavier, and barely holding together something we could questionably call a legitimate adult life. It felt very much like the next logical step for the one-handed demon slayer, and fans couldn’t have been happier with this depiction of the beloved character.

But is this version of Ash really as authentic as fans usually say it is? While it may seem almost blasphemous to even suggest this, I would actually argue that the issue is more complicated than people usually make it out to be. Sure, Ash vs Evil Dead depicts its titular hero just like we remember him, but our memories aren’t quite as reliable as we think they are. Ash wasn’t always a lovable jerk or an unstoppable badass, so when we think about him that way, we’re only remembering a small part of his cinematic history. In fact, that image of him actually ignores the majority of the original trilogy. So, in a certain sense, Ash vs Evil Dead is a bit more revisionist than most fans would like to admit.

Don’t believe me? Let’s go through the original Evil Dead trilogy and trace Ash’s development from film to film. Let’s see how the character changed and evolved as the series progressed, and we’ll see just how different he really was from his final iteration in Ash vs Evil Dead. 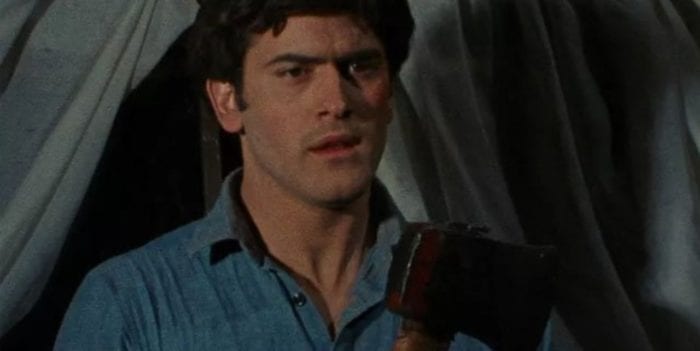 In many ways, The Evil Dead is the odd one out in the original trilogy. It’s very different from the other two movies, and if you’ve only seen those later films, this one might not even seem like a real Evil Dead movie. For example, the demons are never called Deadites, the book is never called the Necronomicon, and the movie is straight-up horror rather than horror-comedy. It almost feels more like a prototype than a real entry in the franchise, and the character of Ash is no exception.

In this first Evil Dead movie, he’s not the quasi-superhero we remember from the later films. In fact, he isn’t even particularly likely to survive. He’s just one guy in a group of five friends, and if you didn’t know anything about the later movies, you’d give him just as much of a chance to survive as any of the other four. The opening parts of the film don’t give us any indication that he’s going to be the hero who finally defeats the demons, so for much of its runtime, you don’t know if he’s going to live or die.

Admittedly, that begins to change in the third act of the movie. After Ash’s friends die, he has to face the demons alone, and he does manage to fight them off and emerge from the cabin victorious. He becomes a bit of a badass, but he’s still not the unstoppable force that he is in the later films. He doesn’t display the same confidence he does later on in the franchise, and he kind of stumbles upon his victory almost by accident.

Along similar lines, Ash’s personality is also very different from the other movies. He’s not the arrogant yet lovable jerk we’ve all come to know and love. In fact, he’s a bit bland in this film. He’s just a regular guy with nothing special or even unusual about him. And for a big chunk of the movie, you don’t feel any particular love or attachment to him.

In a nutshell, this just isn’t the Ash most fans remember from the Evil Dead franchise. Like the rest of this movie, he too feels more like a prototype than the real thing, so we have to wait until the sequel to get what many would consider the “real” Ash. 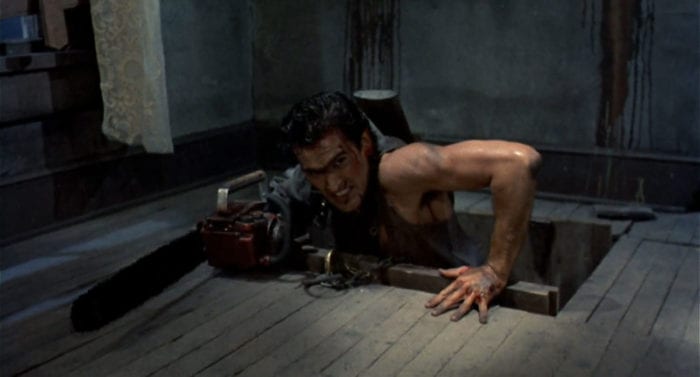 When Evil Dead 2 starts, Ash is once again just a regular guy. But unlike the first film, by the time the credits roll in this one, he’s basically the Ash most of us remember. Right off the bat, when he goes to the cabin with his girlfriend Linda, he’s already different from his previous incarnation. He exhibits a lot more personality than he ever did in the original Evil Dead, so he’s a much more likable character. Then, when Linda becomes a Deadite and Ash has to survive in the cabin by himself, his personality shines through even more, and he shows just how tough he really is.

To take just one example, the scene where he cuts off his hand to avoid being taken over by the demon is quintessential Ash. Not only does the grisly act take way more cojones than most of us will ever have, but he also acts like a madman throughout the entire episode. It shows just how much physical punishment he’s able to take, and it gives us a glimpse of the comedic personality he’s since become known for.

After the other characters arrive at the cabin, Ash pretty much stays at that same level for most of the movie’s runtime, but then in the third act, he takes another huge step towards becoming the demon-fighting Jefe. When he decides to go back into the cellar to retrieve some missing pages from the Necronomicon, he first attaches a chainsaw to his arm and saws off the barrel of a shotgun, and then he utters the word we all love to hear him say: groovy. It’s one of Ash’s most badass moments in the entire franchise, and it’s our first glimpse of the character he’s about to become.

But he’s not quite there yet. Most noticeably, he has a lot of trouble killing the Deadite that was locked in the cabin cellar, so even though he has the look, the hardware, and the attitude, his fighting skills aren’t entirely up to snuff. Similarly, he’s still not an arrogant jerk like he is in Army of Darkness and Ash vs Evil Dead. He’s a much more traditional and straightforward good guy, so he’s not nearly as hilariously endearing as he is in later incarnations.

Then, in the very last scene of the film, Ash completes an integral part of his transformation into the character we know and love today. When Annie summons a portal to banish the Deadites, Ash gets sucked into it too, and it takes him back to the Middle Ages. When he arrives there, he shows some impressive fighting skills by killing a Deadite without breaking a sweat, and it’s at this moment that you know Ash truly is the demon-slaying Jefe.

In a lot of ways, these final scenes in Evil Dead 2 are the birth of what most fans would consider the “real” Ash. Granted, he’s still not an arrogant jerk, so he’s not entirely there yet, but by the time the credits roll, he’s basically the character we know him to be today. He’s one of the coolest, most likable heroes in the entire genre, and you can already see a lot of the traits that carried over seamlessly into Ash vs Evil Dead. 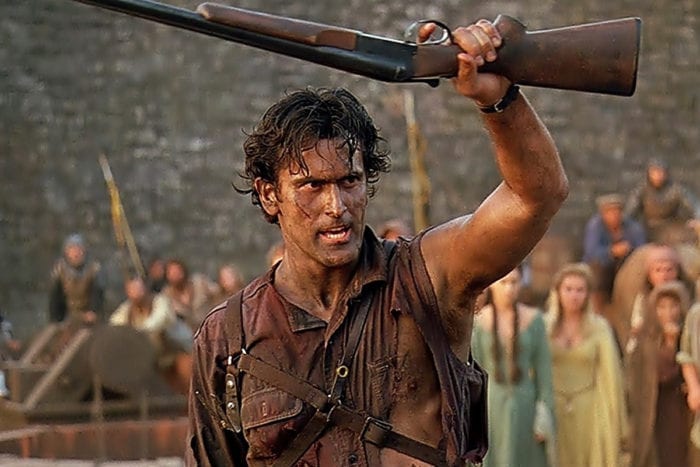 Army of Darkness is the movie that finally gives Ash all the characteristics that make him one of the most beloved horror characters ever created. In this film, he’s arrogant, stubborn, self-centered, and an amazing fighter, and he displays all of those traits right from the beginning. For example, when he’s thrown into the pit after being found by Arthur and his knights, he’s able to defeat the Deadites that are trapped inside it, something that apparently nobody else has ever done before. Then, when he climbs out of the pit, he humiliates Arthur and gives the surrounding crowd a very pompous and patronizing speech.

Similarly, after Ash retrieves the Necronomicon and the wise man tells him he’s awakened the Deadite army, he initially refuses to stay and help. Instead, he just wants to go back to his own time, and he doesn’t care one lick about the people he’s doomed to certain death. Only after his newfound booty call is taken by the Deadites does he finally agree to stick around and lead the people against their supernatural enemies.

Those are just a few scenes, but pretty much the entire film showcases those exact same traits from beginning to end. Ash is a self-centered, arrogant jerk to everyone he meets, and whenever there’s a Deadite around, he always knows just how to kill it and save the day. This is, in no uncertain terms, the Ash that’s lived on in the minds and hearts of Evil Dead fans for almost three decades. It’s the Ash we got in Ash vs Evil Dead, and it’s the Ash most of us would love to see come back to the franchise just one more time.

The Road to Ash vs Evil Dead 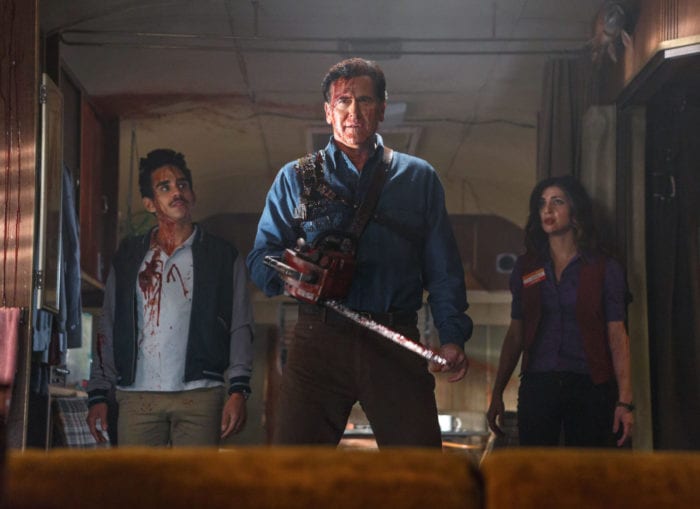 When we go through the entire franchise like this, it’s clear that there’s no simple answer to the question of how authentic Ash vs Evil Dead’s portrayal of Ash is. The character changed from movie to movie, so there’s no single definitive version for us to measure the show against. In The Evil Dead, he was just a regular Joe Schmoe; in Army of Darkness he was the arrogant, obnoxious quasi-superhero we know and love today; and in Evil Dead 2 he was a bit of both.

Sure, the version from Army of Darkness is the one that’s gained the biggest foothold in most fans’ hearts, but he’s no more real or authentic than the other two. Despite what many people might think or prefer, the truth is that those previous iterations of Ash are just as legitimate, so at best, we can say that Ash vs Evil Dead gets one version of the character right. It absolutely nails the Ash from Army of Darkness, but that iteration doesn’t have a monopoly on the beloved hero.