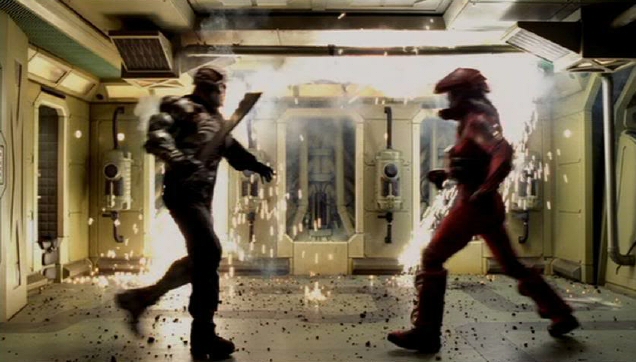 “Space: the final frontier.” For many, this iconic phrase from Star Trek brings familiarity and warmth. However, for long-standing horror franchises, it represents a death sentence; a sign of creative bankruptcy, or an act of “jumping the shark.” For Jason X, (the 10th movie in the Friday the 13th slasher series) space is not necessarily the end, but instead a fun and nostalgic playground for its central killer (Jason Voorhees).

Jason X finds the hockey-masked slasher (Kane Hodder) under lock and key at “Crystal Lake Research Facility.” Jason is due to be cryogenically frozen after surviving many times. However, this is thwarted by happenstance involving a careless guard. The military along with Jason’s overseer- Rowan (Lexa Doig) attempts to stop the killer before he escapes. After a tussle, Rowan and Jason end up being frozen together. Several centuries later, both characters are unfrozen after being discovered on a school trip.

Out of all the celebrated slasher franchises, Friday the 13th has always been the most loosey-goosey one. Its central mythology is non-existent, and the title is often violated (with Parts 3 and 4 not even taking place on Friday the 13th). This is in addition to a revolving door of protagonists that never fully stick, and a convoluted back story for its main antagonist. 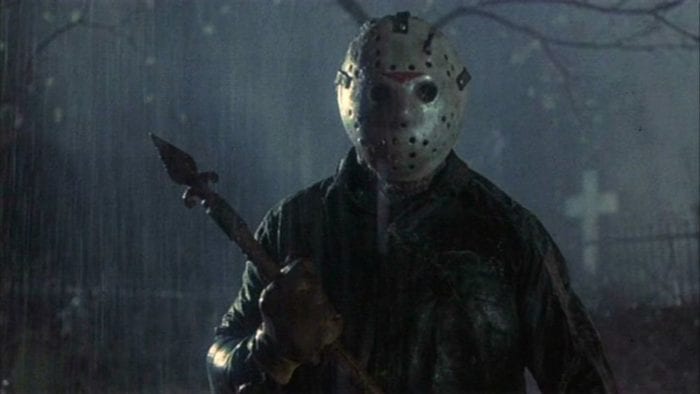 Despite this, the series has survived because Jason Voorhees is a versatile figure, who can be placed in nearly any setting and still work. With this in mind, Jason X is not even the strangest Friday movie. That honor goes to Jason Goes to Hell: The Final Friday, a film that starts with a man consuming a heart, plateaus with a man shaving a mustache, and ends with Freddy Kruger’s glove coming out of the ground. By comparison, Jason X‘s space backdrop seems less of an odd choice.

In fact, X has the quality of a post Scream era movie with its frequent jokes in which the characters spell out their deaths. One particularly memorable sequence is when a female character exclaims- “This sucks on so many levels” before proceeding to die via getting sucked out through an air vent.

At the same time, the film is self-aware of the cliches of the genre and film series at large. Jason’s resurrection plays like a fun game in which the audience’s expectation is teased by many kinky and amorous scenes. David Cronenberg’s cameo at the beginning of the film feels like an amusing nod to the director’s stint as an actor (notably in Clive Barker’s Nightbreed) and body horror films. 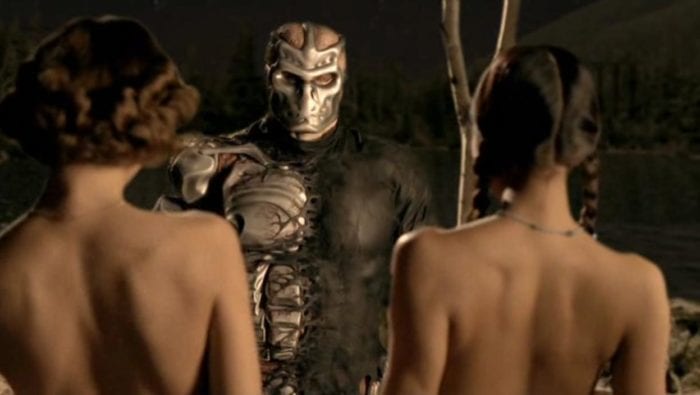 In the film’s most self-aware sequence, one of the characters attempts to distract Über Jason by creating a simulation of a 1980s campground. The mirage has two teenage girls who drink, smoke, strip, and take it in turns to call out the cliches of the films. One says: “Want to smoke some pot?” And another says: “Or we could have premarital sex.” Needless to say, Jason does not react well at all…

In a homage to Jason Goes to Hell: The Final Friday, Über Jason kills both girls by placing them in sleeping bags. He hits one against a tree repeatedly and another against the other sleeping bag. The sound design for the kill is akin to hearing the Muppets acting out a “Punch and Judy” show. The sequence is an absurd and amusing call out of the core cliches for why slashers go after teenagers. In spirit, it also feels like the closest moment to Scream with its playful riffing on the aspects that fuel the Friday series.

The film that Jason X closely resembles is Alien Resurrection, a movie that’s an inherently goofy riff on James Cameron’s Aliens with occasionally disconcerting imagery. Resurrection’s screenplay was written by Joss Whedon and his influence can be felt in Jason X’s cutesy moments.

Notwithstanding the screenplay’s silly nature, some of the small moments stand out. There are many instances in which the characters’ brushes with death and tense situations feel heart-wrenching. This is due to an authentic sense of humanity that bubbles to the surface.

An example of this comes from a scene where Kinsa (Melody Johnson) has to open the door to a ship for the rest of the survivors to get on. She freezes up and eventually destroys the ship in an act of self-destruction. The calm and subsequent annoyed pleading from the crew along with Kinsa’s palpable fear makes the scene quite resonating. Even a seemingly throw-away moment with a character saying before Jason kills him, “It’s okay guys, he just wanted his machete back,” has some emotional truth; illustrating someone who’s trying to reassure himself in a bleak situation. 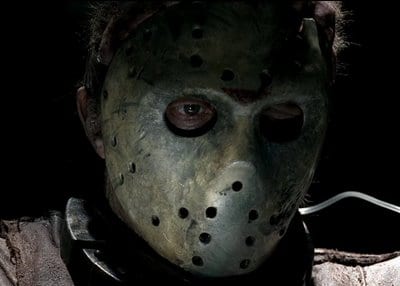 This quality extends to Jason as well. Kane Hodder has made his mark on the franchise by imbuing the character with an imposing and ghoulish physicality. But in Jason X, there are many moments where the camera lingers on Jason’s face. In these moments, Hodder’s eyes are striking and provide the character with some much-needed humanity. Between Hodder’s subtle emotion and hellish fury as Über Jason, Jason X represents the most interesting and varied Jason performance in the franchise. 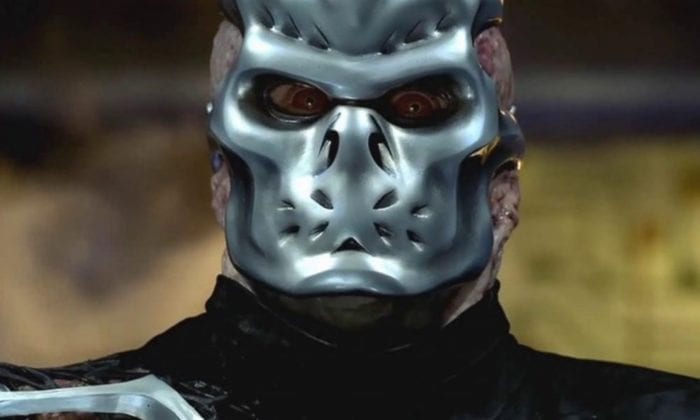 Aside from a memorable death involving Jason taking a female scientist’s face, engulfing it in liquid nitrogen, and proceeding to smash it, the deaths in Jason X are quite tame. In spirit, they homage the early Friday films that had quite a few implied and off-screen deaths. They also heighten the horror in some instances and create some black comedy. One instance is when Rowan awkwardly tries to get past a bloody weapon that Jason has used.

Long-time composer of the series, Harry Manfredini, creates an ambitious and full-blooded score. The most notable piece of music is for the opening credits. Manfredini constructs an imposing theme for Jason via a series of recurring percussive drum beats. Hearing them is akin to an ancient anthem for a gladiator in a Roman colosseum. Incidentally, the opening credits have some of the most striking imagery of the series. In what can only be described as a hellish descent into Jason’s mind, the sequence is a surreal fire and brimstone treat.

Overall, for a series that’s frequently mocked for being formulaic, Jason X represents an interesting outlier for the franchise. Despite being middling in utilizing its futuristic setting and goofy tone, the film has some fascinating aspects that attempt to get to the core of the franchise. Its heart is in the right place, even if it occasionally plays like the cinematic equivalent of someone blowing raspberries.

More From: Friday the 13th