Vampires have long been a sex symbol in horror from Neil Jordan’s Interview with the Vampire, adapted from Anne Rice’s novel of the same name, to the sparkly Edward Cullen (Robert Pattinson) from Twilight, though it wasn’t always that way. Count Orlock and Bela Lugosi’s Dracula walked so that our modern vamps could run…well, sexily stalk. In 2001, Charlaine Harris wrote the award-winning The Southern Vampire Mysteries, which years later would become the source material for HBO’s True Blood. Hitting the air, around the same time as Twilight and The Vampire Diaries, True Blood quickly won the heart of fans all across the world with their no holds barred sex-filled orgy of horror and mystery. Created by Oscar winner Alan Ball, True Blood became, of many things, HBO’s most-watched show since The Sopranos. The show soon worked its way into the zeitgeist and became a cultural staple. It even got the Family Guy treatment.

I remember I took a job at F.Y.E. in high school because I wanted to buy the show on DVD, we didn’t have HBO, but couldn’t justify its, then, $50 price tag. Whenever I worked I would adorn my lanyard with True Blood buttons, would drink True Blood, and whenever anyone asked for recommendations, that would be what I recommended. The show soon became more than a show to me—it was a lifestyle. I would broodily walk around saying, “Sookie,” just like Bill Compton (Stephen Moyer), and that was just the tip of the iceberg. With my recent acquirement of HBOMax, I knew I had to rewatch the show (I’m not sure where my DVDs went). Upon my recent rewatch I realized something…Season 6 sucks. Pun intended.

Before we go forward I should say Season 6 is not unwatchable, but it was a far fall from grace from the first five seasons. It makes sense that there was a fall of quality, as Season 6 was the first season without showrunner Alan Ball. Thankfully Season 7 was much better and provided a great sendoff for the show. So what exactly was wrong with Season 6? 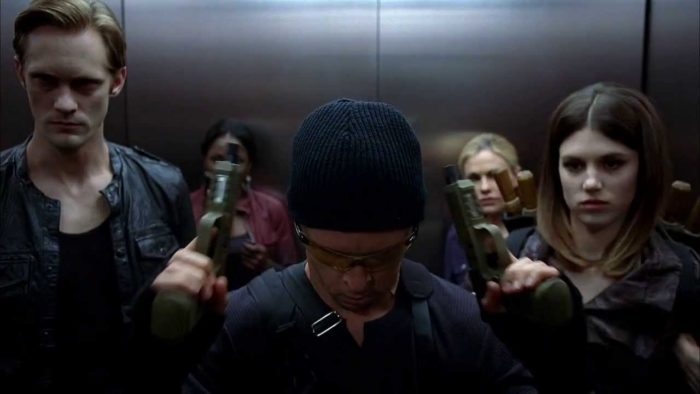 Let’s start with the acting. When you have to constantly say things like fangbanger, Maenad, faerie, shifter, werepanther, etc., it can be hard to make it sound natural. True Blood had carved out its own specific stylization that made it feel natural. Well, as natural as it could sound. Once Ball left, the directing really suffered, which in part meant the acting was going to suffer as well. Sookie Stackhouse (Anna Paquin) really struggles in Season 6, which makes things stilted since she is, basically, the lead. One of the big things (even though it is first mentioned in Season 5, it’s not until Season 6 that it becomes an issue) is the constant mention of Sookie’s, “faerie godfather.” Every time she says it, it looks, and sounds, like she had a mouthful of peanut butter and the director called action before she was ready. With it being such a big thing in the season it just makes the acting way too unnatural. 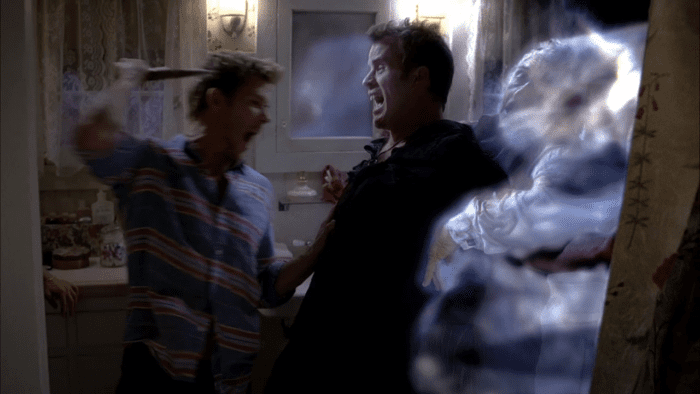 With the topic of acting, we have Lafayette (Nelsan Ellis). It should be mentioned before going into this that Ellis, rest in peace, was an amazing actor in his life, as well as through the majority of Season 6. Shortly into the run of the show he gets Brujo powers from his deceased boyfriend Jesus (Kevin Alejandro). There are a few points within the show where he, willingly or unwillingly, gets possessed by a spirit. The majority of the time he kills it with his acting. Unfortunately not in Season 6. At one point in Episode 5 “F*ck the Pain Away” (oh and side note there is a gratuitous amount of sex in this season, like more than the other seasons combined) Lafayette channels Sookie’s dad Corbett, which leads him to kidnap her and try and kill her, just like her father tried. His acting in this scene is just completely atrocious and seems like he was given no direction at all. The very last thing I want to talk about acting-wise is Niall Brigant (Rutger Hauer). All I have to say is Hauer looks and acts like he was there for the paycheck, and that was it. C’mon blade runner. 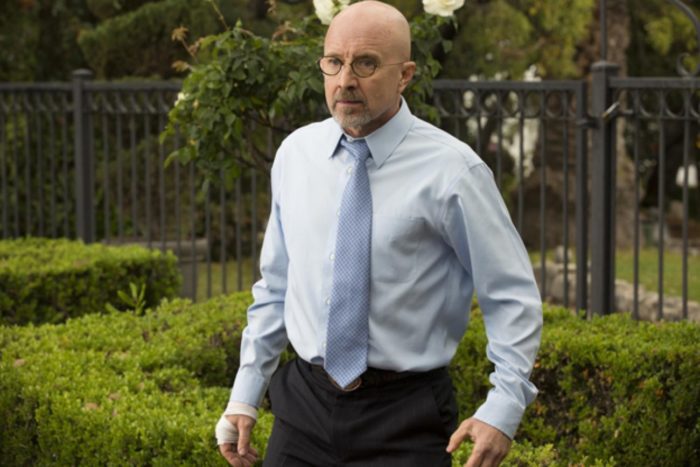 Set-wise Season 6 is painfully awful. There are two main atrocities: the 3500 B.C. scene, and Governor Burrell’s (Arliss Howard) mansion. Let’s start with Episode 5 “F*ck the Pain Away” (which now seems to be one of the worst episodes apparently). We are given Warlow’s (Robert Kazinsky) origin story which starts in 3500 B.C. when Lillith (Jessica Clark) meets him, her first run-in with a faerie, and turns him. The set for this scene looks like a cheap Disney ride, with an ugly matte painting background. It was just completely scene-breaking and takes away from the huge emotional beat of the scene.

Conversely, we have a fantastic set in Governor Burrell’s mansion, but only because it was a set they were already using. The mansion that they used to moonlight as his? Bill Compton’s. It is so unbelievably clear that Burrell’s mansion and Bill Compton’s mansion are the exact same set. They both have their offices in the same room, stairway in the same place, oh and the big thing? The room to the right of the door. Bill Compton has furniture in there, all perfectly centered by his fireplace. Governor Burrell has that room completely empty, and all that’s in there, from the few shots we see of it in the background, is that fireplace. It’s so glaringly the same that, like many other things in this season, are scene-breaking and really take away from the whole vibe they are trying to create. 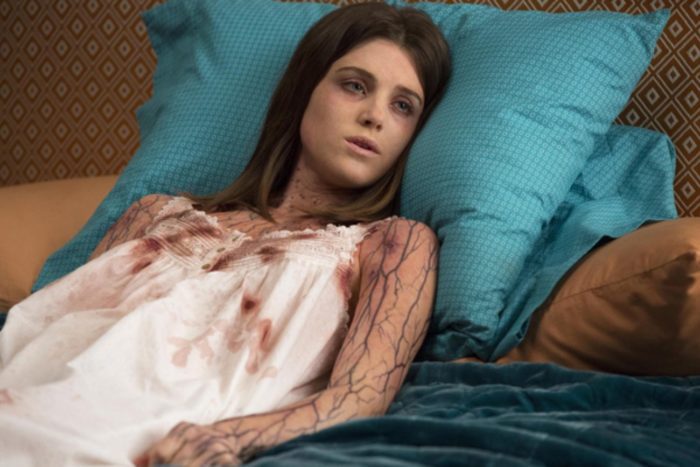 There are also two major plot issues throughout Season 6. The first one is Hepatitis V, which is a plotline that seemingly came out of left field…or did it? There is a moment in Season 2 where it is mentioned that Hepatitis D is fatal to vamps, and then there is not one single mention of it again until Season 6. The idea of it is actually wonderful, but you’re telling me in all this time one of the vamps in the show didn’t feed on someone who had Hep D? It’s so weirdly retconned as an idea that has always existed but never discussed. It felt weird and forced to bring it up out of nowhere. 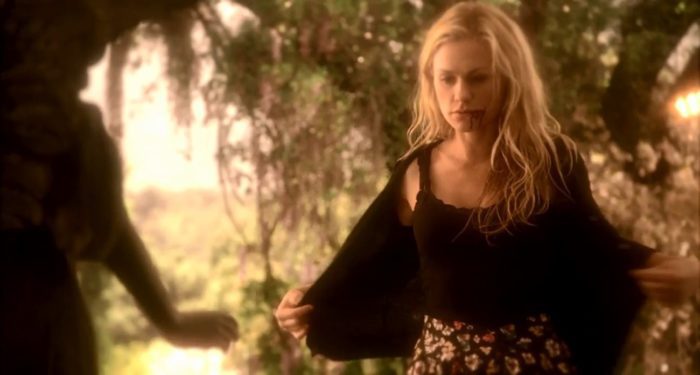 A few other issues I had are in Episode 6 “Don’t You Feel Me.” The fight scene in prison between Eric and Pam (Kristin Bauer van Straten) has some of the ugliest wirework I have ever seen and doesn’t feel like a true vamp fight. There is a moment when it is discussed that Adilyn Bellefleur (Bailey Noble) says she doesn’t know how to use her powers, but she can figure out how to unlock a faerie light seal without knowing what that is? Also, I don’t think Alcide (Joe Manganiello) would never brutally beat up a woman like that. The soundtrack for this season also felt strange, the biggest issue I had regarding it was in Episode 4 “At Last” when they play Adorn by Miguel. I personally love Miguel, but in the universe of this show the song just really felt out of place. And finally, Episode 10 “Radioactive” ends with an amazing cliffhanger and is immediately ruined by Radioactive by Imagine Dragons.

There are many other issues throughout the season, but there are also some great moments, in fairness. Terry Bellefleur’s (Todd Lowe) story arc in this season is unbelievably heartbreaking, and this gives Arlene (Carrie Preston) a chance to actually show how fantastic of an actor she actually is. Eric rips someone’s d*ck off in a crazy way. And that’s just the tip of the positives of this season. I wish the positives were able to outweigh the negatives, but they were just so overwhelming that it made the season just feel flat and directionless.

Looking for more on True Blood? We’ve got you: