Mother’s Day is upon us, and what better way to spend it than with a list of moms worth killing for? These children are the kinds that are willing to do anything for their mother (or grandmother), no matter how vicious the act or how poorly their mother treats them.

Henry (Macaulay Culkin) is a manipulative little brat that feels he can get away with anything by running into the loving arms of his doting mother (Wendy Crewson). Henry drops a papier-mâché dummy onto the highway and causes a horrific accident, shoots makeshift crossbows at animals, hurts his sister (Quinn Cilkin). He lies about all of it to implicate the cousin (Elijah Wood) who has come to live with them following the loss of his mother. A little less forthright than The Bad Seed, The Good Son proposes similar psychological motivations and questions, ending on an ethical dilemma. “If I let you go, do you think you could fly?” 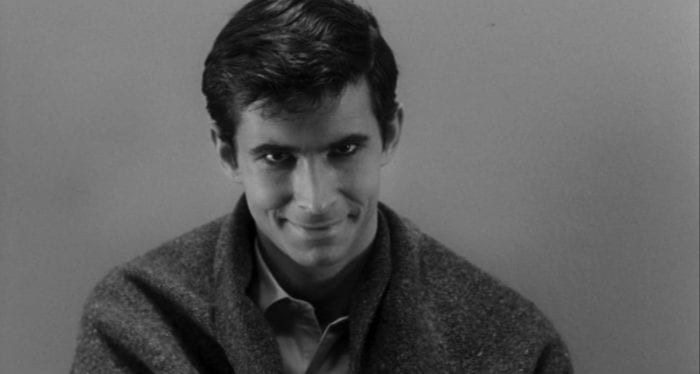 “A boy’s best friend is his mother,” Norman (Anthony Perkins) says moments before inflicting his mother’s wrath onto Marion Crane (Janet Leigh). How dare that embezzling woman try to lure her son away from her, offering him to come inside her room, telling him to go away and leave his darling mother, and then asking why he doesn’t place her in an institution? Why, it’s enough to make a boy “go a little mad sometimes.” Norman may be the ultimate Psycho, but is he also the ultimate mama’s boy? I mean, he did commit matricide in the first place. 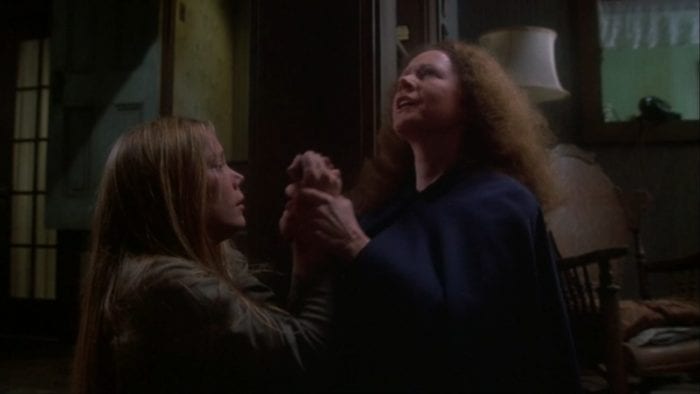 Carrie may seem like an unusual pick for this poll, but to make the case for Carrie White, let me quote Will Smith and DJ Jazzy Jeff in saying sometimes “Parents Just Don’t Understand.” Carrie (Sissy Spacek) tries so hard to please her mother Margaret (Piper Laurie) by conforming to her every fanatical religious belief. Though Carrie is stuck in a difficult domestic situation, trying to navigate being a teenager while abiding by her mother, she is ultimately seeking her mother’s love. It’s only when it becomes clear to her that she will never obtain it—when she is betrayed by Margaret after returning home from the prom—that Carrie turns on her. It’s the kind of love that really brings down the house (rimshot).

Some children aren’t completely human. Clone Ripley (Sigourney Weaver) contains both Human and Xenomorph DNA as well as the Queen Alien she spawned. Sure, Jean-Pierre Jeunet’s film contains some interesting avant-garde choices but watching Ripley’s queen “daughter” birth an Alien-Human hybrid that immediately destroys its mother in favor of its grandmother is pretty enthralling. The fact that the hybrid seeks Ripley’s affection by killing anyone that gets in between them is why it makes the list.

Some children aren’t even slightly human, and emotional-support animal Reuben (Chico) proves that. This adopted pupper goes full Cujo to protect his dog-mom Maggie (Judy Greer) from the stress in her everyday life—like greedy landlords, overbearing bosses, and bad dates—by going straight for the jugular.

Bigas Luna’s film within a film focuses on John (Michael Lerner), an optometrist’s assistant who is losing his eyesight. Hypnotized by his mother (Zelda Rubinstein), John collects eyeballs to bring to her. The diegetic film, Mommy, also spills out into the “real-world,” causing a movie patron to become affected by the onscreen hypnotism and kill for her, too. Anguish is a twisted film, and Mommy is an underrated slasher. 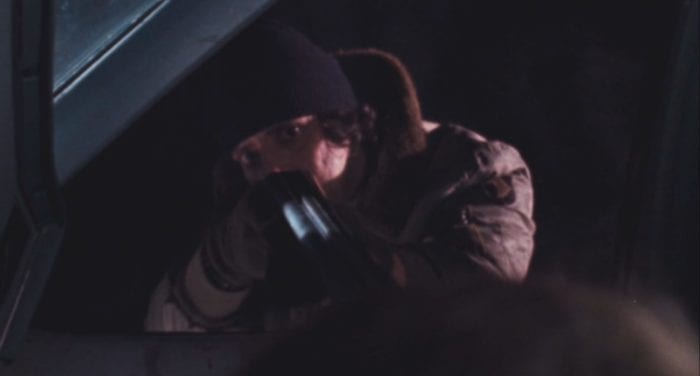 Freud suggested that young boys idolize their fathers to gain their mother’s affections. Though his language is of a far more sexual nature, boys typically grow out of their Oedipal complexes but not Frank Zito (Joe Spinell). Frank, abused and tortured by his mother as a child, now considers beauty a crime punishable by death. Scalping his victims, Frank returns to his home to place his trophies on the heads of mannequins and holds conversations with the mannequin, as well as to have nightmares and hallucinations about his mommy.

Billy (Skeet Ulrich) reveals his true motives at the end of Scream, noting that Sidney’s (Neve Campbell) mother caused his mother to leave when she caught her mother and his father involved in an affair. Billy’s part of his and Stu’s (Matthew Lillard) killing spree is vengeance for his mother’s heartache—the sign of a doting son if there ever was one.

Jason and his mother Pamela Voorhees (Betsy Palmer) have a unique bond in the Friday the 13th films where they are both willing to kill for each other even from beyond the grave. IMDB says that even composer Harry Manfredini hinted at messages from Jason to his mother in the score, as if the words “kill, kill, kill, mom, mom, mom” are being uttered within her mind. This relationship was easily manipulated by Freddy Kruger in Freddy Vs. Jason who made himself appear as Pamela Voorhees in Jason’s dreams to begin a killing spree on Elm Street. 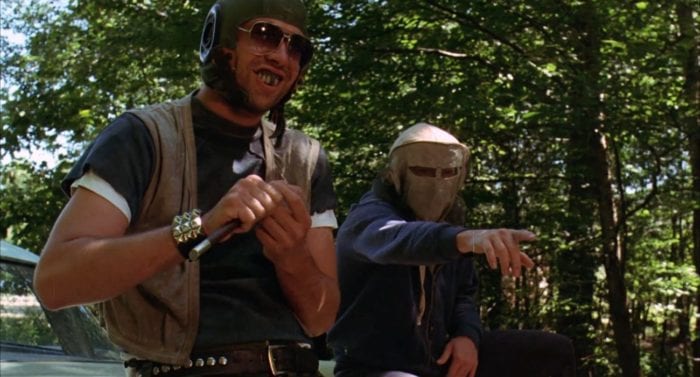 Nothing says “backwoods” quite like New Jersey, the setting of Charles Kauffman’s Mother’s Day, where brothers Ike (Frederick Coffin) and Addley (Michael McCleery) kidnap and brutalize young women for the pleasure of their sadistic mother (Beatrice Pons). The menacing parts that lands these two on the list are the dating scenarios they put one of their victims through while their mother watches on. I imagine this to be the same level of awkwardness as parents watching their children appear on The Bachelor. Mother’s Day lands somewhere between Texas Chain Saw Massacre rip-off and exploitation film, but Ike with his cataract eye and dead tooth and Addley covering his head with a beekeeper’s mask are definitely the kind of creatures only a mother could love. 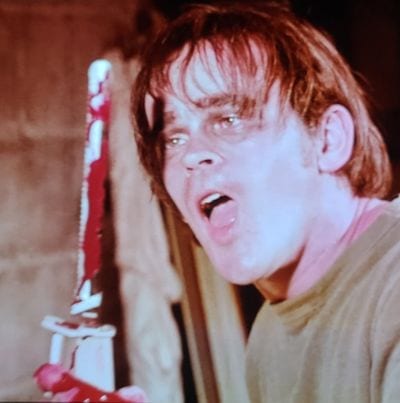 A fun gem from Herschell Gordon Lewis, The Gruesome Twosome is a grindhouse film with some terrific early makeup effects work and great villains like the Pringles. Rodney (Chris Martell) promises to be a good boy so he can always live with his mother (Elizabeth Davis) and never have to go live in an institution. That’s the loyalty pledge the developmentally disabled Rodney says to his mother just before she gifts him an electric carving knife. The manipulation tactic helps Mrs. Pringle keep Rodney close to her so she can use him to do her dirty work. Mrs. Pringle lures victims to her home with a “room for rent” sign then traps them in a room with her son, who scalps them for her wig business. It’s entirely obscene by today’s standards, but Rodney still finds his place among the other loving sons and daughters in the poll. 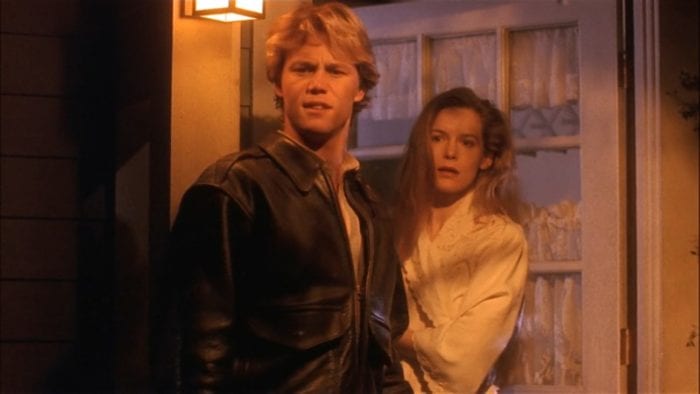 In terms of how much a child can love their mother, Charles Brady (Brian Krause) maybe goes a little too far. Were-cat-energy-vampires are just a little closer than most, I guess. The pair go from town to town feasting on virgin victims, stealing their energy to remain young, and having incestual relations. In terms of weird movies, Sleepwalkers is definitely up there, making very little sense but making up for it by leaning into its WTF nature. Charles is likely the sickest mother-lover out of these killer kids, but does that earn him the top spot?

Now you tell us: cast your vote for the biggest mama’s boy (or girl) in the horror genre!

More From: Quizzes and Polls