Back in the good old days of 1999, my dad and I used to go to a mom & pop store called Lazer Video (R.I.P.) to rent LaserDiscs, mainly so we could foolishly maintain the lie that our investment in state-of-the-art LaserDisc technology was not the next Betamax and was, indeed, the revolution. Needless to say, Lazer Video was dwindling, likely only held afloat by just me and my dad’s wallets alone, but they had so many great discs and, frankly, who else did? DVD hath spawned and there was to be a reckoning for all other media.

One particular summer night I was in the mood for a little gore and a little space so I thought, “let’s rent Alien: Resurrection.” My dad didn’t know anything about the Alien franchise so he kindly asked the Lazer Video employee for “Alien: Insurrection.” I smirked, Trek fan that I am, and regaled the employee with my fanfiction of what Alien: Insurrection would be about: mainly, aliens rebelling against a corrupt system trying to forcibly relocate Ripley and a group of androids. There were crickets.

Now, 20 years later, I actually see that happy accident of calling the film “Insurrection” kind of telling of what the filmmaking process was like for the production of Alien: Resurrection. Coming five years after the much-maligned and heavily edited Alien3 (as my associate Steve Wandling explains), Alien: Resurrection wasn’t exactly the hottest ticket item in town. In its opening weekend, Resurrection got trounced, by double digits, by Robin Williams’s Flubber while barely beating out the animated film Anastasia, which was in its third week of release. 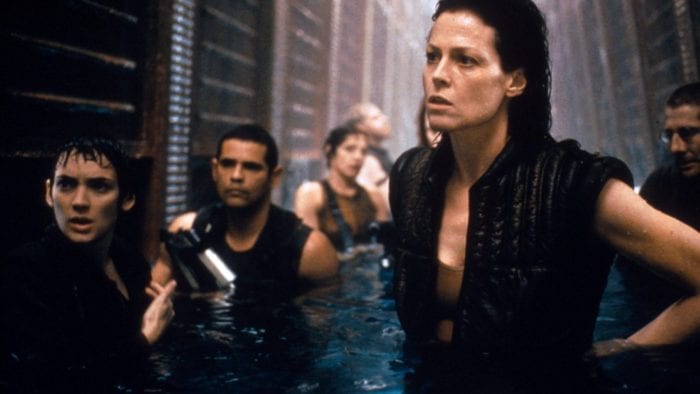 By week three, Alien: Resurrection was still getting dunked on by its mortal enemy Flubber but also the release of Scream 2 (okay, that makes sense), For Richer Or Poorer (uhhhh), Amistad (fair), and Home Alone 3 (wait, that was released theatrically?). While the worldwide box office haul was just enough to save the day overall for the studio, the film was met mostly with indifference and quite a few sneers.

But that is where the Insurrection reference comes into play. In keeping with the franchise’s tradition of delivering the unexpected in theme, scope, and (most importantly) directors, Alien: Resurrection was, in a sense, a revolt of the studio system, an about-face from the already flimsy canon of the then three-film franchise, and a cheeky grin to the burgeoning fan landscape that was growing with the rise of the World Wide Web.

Because, either in a vacuum, or taken only in hindsight of 1997, Alien: Resurrection was as subversive as it was divisive. Helmed by Jean-Pierre Jeunet, a Frenchman with horror chops and an eye for the weird, Alien: Resurrection basically went where no Alien film had gone before. It set itself hundreds of years after the last film, invented a new mythos, and redefined the xenomorph itself, down to its sexuality and, well, humanity.

In brief, Alien: Resurrection centers around a successful clone of Ellen Ripley (Sigourney Weaver), who was brought back to life using her “infected” DNA from Alien3, when she was carrying an Alien Queen inside her before she killed herself. Ripley has vague recollections of who she was in another life and body but is virtually an alien herself.

As one does in these movies, the Company (formerly Weyland-Yutani, now Wal-Mart…seriously) wants to use her DNA to create aliens and, if possible, concoct different species of creatures. While some enjoy the perverse science of it all (like Brad Dourif), others (like, who else, the military) want weapons. It all comes to a head when a group of space pirates led by Ron Perlman’s psychotic Johnner and undercover android Call (Winona Ryder) join Ripley’s vessel, delivering human cargo for the alien experiments. As expected, aliens get loose and the chase begins. During her escape, Ripley must figure out the meaning of her life, the existence of previously failed clones of her, and her biological duties (such as procreation) as a new form of life.

In 2019, it is hard to think of a major studio financing a known IP that explores and deconstructs the IP itself by asking, as well as depicting, uncomfortable subject matter while at the same time using primarily practical effects (there is not a lot of CGI in the film) on a relatively mid-to-low budget. Imagine if a Marvel film had Tony Stark finding out Thanos used Stark’s blood to try to replicate his brain structure and memories into a new body, then used Ebony Maw to conduct biological experiments that grafted Stark’s DNA and one of those four-legged dog things Thanos uses as cannon fodder to create a new form of life…and then Stark had sex with it?

Sure, the Alien films aren’t as culturally prevalent as the Marvel mythos in the zeitgeist, but it is still a known property with established characters. Did you, at any point, imagine Ripley would be protective of a xenomorph let alone let one impregnate her? Of course not! Jeunet dared to go there and took the rest of the franchise with him in what would be a one-off collision course with strangeness that scared executives so much, it took them seven years to try again, leading to the laziest and dumbest franchise turning point: Alien vs. Predator (or AVP if you care, which I don’t). 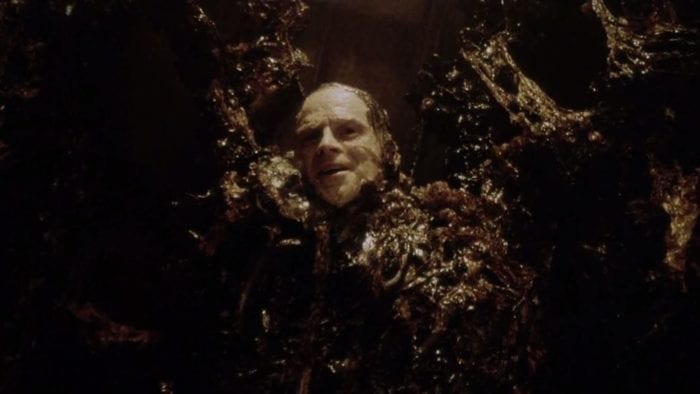 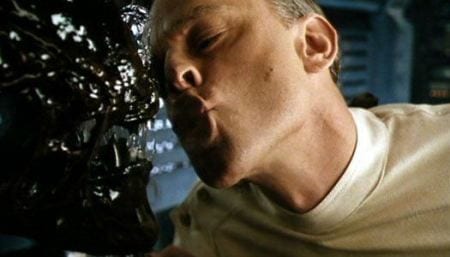 Okay, back to our regularly scheduled programming.

Alien: Resurrection was never held to 2019 standards of existence but, upon viewing, you could tell there was a sense of brand respect and consistency that falsely needed to be met. As previously mentioned, Aliens and Alien3 are vastly different films than Alien. Before Alien: Resurrection, the franchise consisted of a horror film, an action film, and a thriller. Resurrection attempted to be all three and more, and perhaps the mixture was just too much.

For the standard moviegoer, like my dad, the experience was too kaleidoscopic. One minute you’ve got Dan Hedaya picking out a piece of his brain and staring at it, the next a woman is getting the most orgasmic foot massage in film history, which then all leads to 45 minutes of Ron Perlman, a disabled Frenchmen in a tricked-out wheelchair, and that one dude from CSI doing awesome gun stunts and one-liners. So I get that response: weird, quirky, all-over-the-place cinema is tough for people just wanting to escape for two hours.

But the genre fan and knowledgeable filmgoer consensus seems to be that the film sucks, with a lot of complaints is that “it wasn’t the real Ripley” or “Aliens was better,” et cetera, et cetera. This film was never given the chance to exist on its own terms like the other 3 films in the franchise. Yes, being the third sequel to an all-time classic has its drawbacks, but Resurrection wasn’t doing anything differently than James Cameron and David Fincher were trying to do with their Alien films: tell a unique story using established characters and/or ideas.

On the technical side, I don’t think the film can be questioned for its brilliance. The production design by Nigel Phelps, art direction by Steve Cooper and Andrew Neskoromny, and set decoration by John M. Dwyer is excellent, evoking the existing universe established in the previous films but advancing them 200 years into the future, making the older things from the “used future” concept of Star Wars borrowed in the first Alien look older and the newer things look fittingly futuristic in contrast.

Aiding those people’s fine work is the breathtaking cinematography of Oscar-nominee Darius Khondji, whose use of light, shadows, depth, and smoke-saturated hallways evokes tension and confusion. The xenomorphs themselves, not to mention the human/alien hybrid later introduced, are mostly model design work (there is an underwater sequence where they are clearly ’90s CGI, which is unfortunate), and the design team adds steam to their skulls and breath and all matter of liquids and viscera to exude from their bodies. 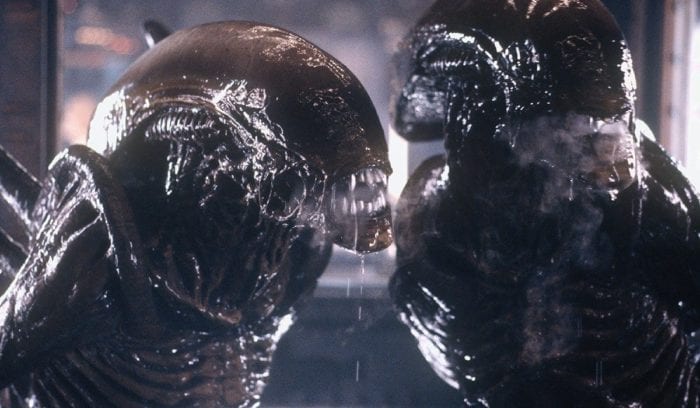 Add practical ship effects which, to me, is still the only way to go when depicting starships, and truly astounding stunt work (including an underwater chase sequence that was filmed with the real actors for weeks) and your production itself is top notch. Lastly, layering it all with dread and importance, is the score by John Frizzell: an especially haunting one, evoking the grandness of the Universal monster films of old where life was also experimented with, while playing with Jerry Goldsmith’s original theme in bits and pieces.

So it all must come down to a matter of taste, subject-wise. Alien: Resurrection rivals or surpasses its predecessors on the technical side, so what exactly rubbed people the wrong way? If it was the philosophical debate of man playing with nature, Ridley Scott would do the same years later in Prometheus and Alien: Covenant (also to mixed reviews). Could it be the movie’s mixture of bizarre humor and horrific action? It is hard to find a film that can make you chuckle and then gross you out a second later. Is it the subtle religious meaning of creating life and nurturing it? Is it just plain funky to see Sigourney Weaver get it on with a xenomorph?

Something tells me it is all that and more. But, compared to what the franchise would briefly become with that Alien vs. Predator nonsense, at least Alien: Resurrection tried to say something—anything. None of the films up to that point forgot that the xenomorph itself is a prop for human stories, and Resurrection is the ultimate human story: what it means to be human and what someone (or something) created as partially human means for our existence. Aliens flirted with the concept of motherhood and natural protection instincts but that was against an Alien force. Resurrection takes that concept and runs with it, asking: what if the alien is us, literally and biologically?

Has it been a while since you saw it? Watch it again and share your opinions with me here. I was fortunate enough to see this on the big screen opening day and I’ve always had a soft spot for it (and still do, 22 years later). As the franchise itself continues to age, and film stories in general become more nuanced and advanced as the medium grows and mutates, I think Resurrection has aged better and better.