Joe Bob, Darcy and the gang returned for the holidays with Joe Bob Ruins Christmas. Continuing the tradition from last year, they raised money for various charities by auctioning off memorabilia like movie props or Joe Bob’s own belt buckles, raising over $40,000! To switch things up this year, they also offered a series of branded merch: a tote bag, shirt, and hoodie, all available from Fright Rags during the Telethon. Since the auctions can get up to thousands of dollars, it lets The Mutant Fam pitch in at a more affordable price. All proceeds from these sales were split between the selected charities.

Telethons always have celebrity guests on the phones, which was the case this time too! The Chili Bandit, Sleepaway Camp star Felissa Rose, John and…”Steve Wilcox” in a gorilla suit?! Yuki unfortunately was in LA but chimed in via video chat.

Joe Bob explained that since no one is ever satisfied with the Christmas movies they pick, instead, each of them would present a film as a “gift” to the other. Joe Bob’s gift to Darcy was Ice Cream Man, starring her favourite, Clint Howard! While it may not be very festive, it’s a great film with a lot of cheese—it’s still dairy, so it counts! The first charity was First Book, which gives underprivileged kids reading materials and provides equal access to quality education.

Gregory witnessed a horrible murder as a kid and grew up to be, well…a creepy Ice Cream Man. Since the film is inspired by and in a way, a modern version of “The Pied Piper,” Joe Bob went into the story during the first break. You always pay the piper! John became overcome with festive spirit and broke out in song several times, with the others joining in at various points to Joe Bob’s annoyance. An interesting tidbit is that while you expect the kids to get murdered in all sorts of clever ways in this film, nothing really happens to them. One of them does get kidnapped, and that’s definitely traumatizing—potentially creating the next Ice Cream Man. (My sequel title: Double Scoop. My partner suggested Second Helping.) Olivia Hussey of Black Christmas fame plays Gregory’s landlady slash neighbour slash guardian. 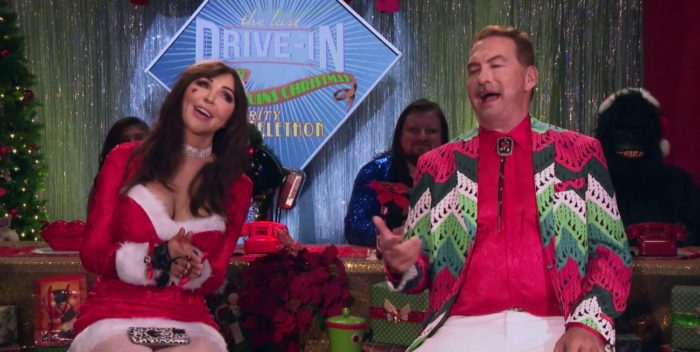 The National Coalition Against Domestic Violence was the second charity chosen, with Darcy contributing her Audrey II hand puppet from the Little Shop of Horrors episode. Rick Moranis was unfortunately not included.

One of the things I love about watching Joe Bob is that even if I’ve seen the movie before, the fun facts and rants in between scenes really add to the experience. I’m impressed at how much info sticks in his brain; I can barely remember yesterday!

Without a doubt the most awkward scene in Ice Cream Man is when the cop duo heads to the psychiatric hospital that housed Gregory, now decrepit and covered in graffiti—but it is still full of people, who act like bloodthirsty zombies. But it’s still two police officers beating up and shooting at mental patients! Oof. I do (for the most part) enjoy this movie but the asylum trope is always uncomfortable for me. The film ramps up the kills with Gregory going on a pun-filled rampage through the town. Clint Howard does a great job with this role; he’s clearly having a lot of fun being a weirdo. He always put 110% into his roles! The local kids eventually trick him into a mixing machine, ending his reign of terror. It’s a small consolation he went out in the place he loved the most: the ice cream parlour.

Before the second film, Joe Bob unleashed one of his patented rants explaining in great detail why he doesn’t like triathlons and announced the third charity: National Greyhound Foundation, which was actually founded by the filmmakers after retiring. The NGF rescues, find homes for and educates people on the abuse that greyhound racing dogs endure.

Darcy’s present to Joe Bob was the film Gator Bait to his delight, and he proclaimed it “the most Southern movie ever.” I’ve never even heard of this film! I don’t usually go for killer animal films, but I’m willing to try anything out. I do remember being terrified of Lake Placid when that came out, though! (Content warning: Gator Bait contains scenes of attempted sexual assault.)

Wasting no time, we start with two “good ol’ boys,” local deputies Ben and Billy Boy, chasing down a scantily clad woman in her boat (to some incredible fiddle music). When they catch up to her, she throws a pile of snakes at them—a very effective strategy, in my opinion. Ben dies after accidentally being shot by his partner. Billy Boy then cries to his pa, the local sheriff (coincidentally named Joe Bob) that it was all that “Cajun Wild Cat” and seeks revenge for Ben’s death, plus the destruction of his boat. 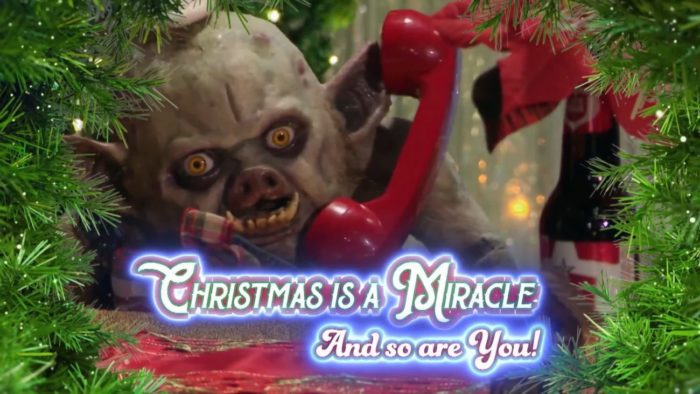 After an attempted incestuous sexual assault just to show you how gross these locals are, a girl is saved by her father who proceeds to whip the hell out of his son. The sheriff is here to recruit the family to his cause. I was sitting here in shock—the movie’s just started! It slows down immediately after, with a huge portion that is just footage of Desiree hanging out in the swamp, catching critters and generally just living her life with her siblings.

Then the men find Desiree’s sister Julie and kid brother Big T. alone and proceed to horrifically murder her, setting up the Rambo-esque third act. I fully admit I’m not the biggest rape-revenge fan. I’ve seen a decent amount of them, but assault is just one of those things that’s difficult to watch. I can appreciate the catharsis they provide though!

The fourth and final charity was the Appalachia Service Project, which help fix substandard housing using volunteer labour to make homes “warmer, safer, and drier.” Joe Bob says they try to cover all their bases with charities selected: women, children, animals, and housing, as these are all obviously important causes but also because they relate back to the story of Christmas itself.

I have to say, my favourite part of Gator Bait is the high-energy soundtrack. Twanging banjos, harmonicas, fiddles, and even an accordion add a huge amount to the film. (Desiree also has her own theme song!) Even if I wasn’t into the subject matter I could appreciate the music! Desiree takes down each man one by one using traps and her knowledge of the swamp.

Some might not consider tonight’s films festive enough, but the holidays—to me—are more about spending time with your loved ones. If you want to have quality time by watching low-budget exploitation films then more power to you. Thanks to Joe Bob and the team for another great show!