The older I have gotten, the more Christmas has fallen out of favor with me. Gone is the magic that is synonymous with the festive season, and in its place is a nihilistic mood that darkens my heart and soul like the coldest days of winter. I am not what one would call an emotional person to begin with, but staring over the Christmas landscape and seeing nothing but consumerism and greed rankles me to no end. Add on top of that crippling depression and PTSD, and the Christmas season is less a festive delight that never ends and more a gloomy slog to trudge through that never ends. But there was one shining beacon of hope that manifested itself through the sorrowful and morose curtain of dread that I call winter: Joe Bob Briggs. Was his beacon there to save me? Not directly, but as the title of his latest Shudder special exclaimed, Joe Bob Saves Christmas. Maybe just for one night, he saved more than Christmas.

As has been the tradition since his triumphant return in 2018, Joe Bob had a one-night special with Darcy the Mail Girl hosting a double-feature of Christmas-themed terror. On the docket for this annual tradition was the French, Home Alone-inspiring 3615 code Père Noël, followed by the forgotten Christmas classic, Christmas Evil. Though I would call myself a film connoisseur, I was pleasantly surprised that Joe Bob selected two films that I had yet to see. Neither film had the feel of other “dark or gritty-type” horror films. Instead, we got an eclectic mix of ’80s horror nostalgia with Christmas Evil mixed with the rough-and-tumble energy of 3615 code Père Noël. Sometimes, even us horror fans need a departure from darker horror films like Salò, or the 120 Days of Sodom, the original Martyrs, or A Serbian Film. Reliable, entertaining horror sometimes is all you need to warm the cockles of your heart.

And warm they did. But what really warmed the sub-region of my heart came not from the film but from Joe Bob and Darcy. Instead of a typical episode of Joe Bob sitting in his chair with a trusty Lone Star in his hand and rattling off movie factoids, this special came with him and Darcy setting up shop in a homely kitchen and auctioning items off for charity. No, Joe Bob did not stray too far from the path while he provided plenty of film insight and deep dives, as his custom with his show during the breaks. When complete with his insightful commentary, both he and Darcy would offer up one item each and auction them off for various charities. In typical Joe Bob and Darcy fashion, the items up for auction varied wildly in quality. 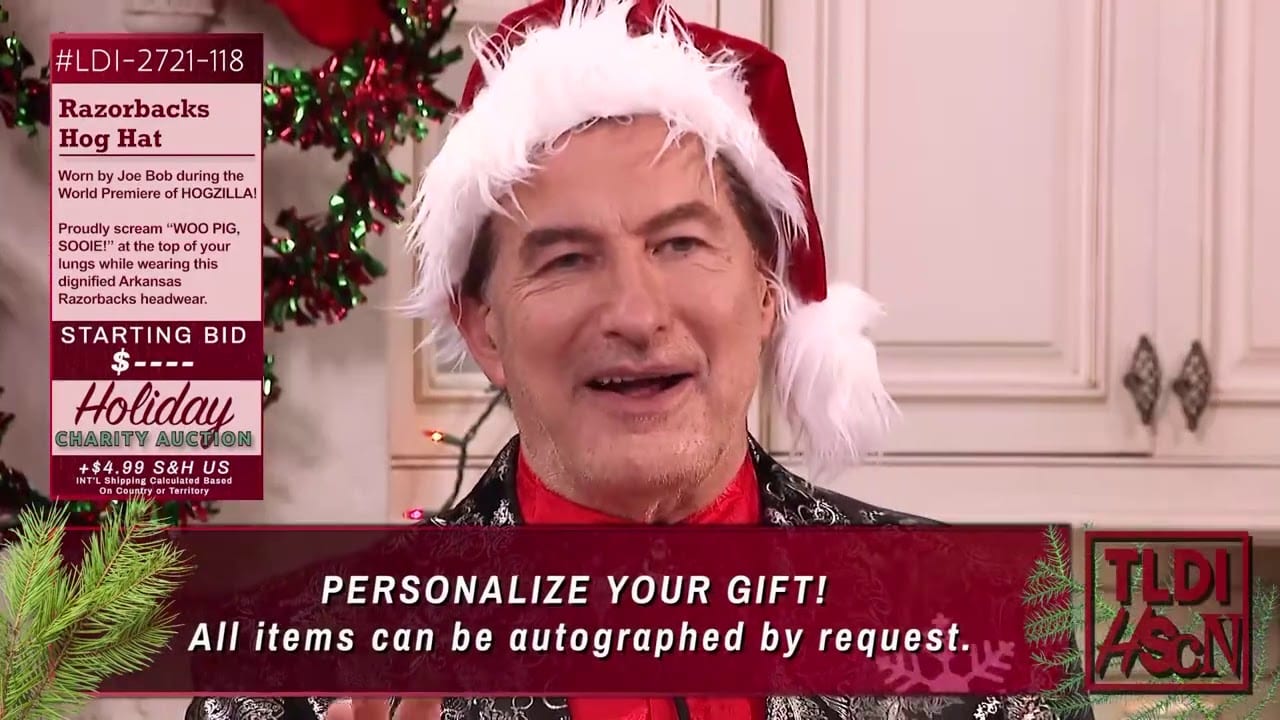 For instance, during the first break, Darcy presented her replica mask from the film Demons that she wore on a prior episode. That certainly is an item worth auctioning off, right? Not to be outdone, Joe Bob countered her offer with a cloth mask covering with a hunky and buff cowboy emblazoned on the front. As would be expected from Joe Bob, his assuredness that he would garner more money for charities fell flat on its face as the night wore on. While catering more to the fans in a memorabilia sense, Darcy offered up the more enticing item; Joe Bob countered with the mask being personally worn by himself that he would autograph. So, obviously, when looking over these two offers, the clear choice would be the buff cowboy mask, hands down.

And that is how it went over the four-and-a-half-hour plus show. Joe Bob and Darcy would each present one item and begin the bidding at a reasonable price, hoping for a good return. The same theme continued from beginning to end with Darcy auctioning off worthy items including a Tom Savini-autographed copy of Savini, Darcy’s The Last Drive-In crew jacket, and an autographed Halloween III mask. On the other hand, Joe Bob countered with a seahorse belt buckle, a signed copy of the book Eccentric Orbits by author John Bloom, and a used copy of Cracker Barrel-opoly. There are more items for auction and from Darcy and Joe Bob, with all funds going to different charities: The Trevor Project, The National Women’s Law Center, The Peaceful Valley Donkey Rescue, and the Organization for Autism Research.

What Joe Bob and Darcy did for Joe Bob Saves Christmas is a wonderful idea, and I hope it becomes a recurring theme.

There is one other moment during Joe Bob Saves Christmas that I wanted to touch on. For anyone who has yet to see The Last Drive-In, once the first film is complete, Joe Bob reads a letter before transitioning to a break before the second film. Darcy provided him with a letter from a fan in Oklahoma who mentioned that they were close to their grandmother and spent time together watching various movies and watching MonsterVision. The letter continued on about this person’s grandmother passing away shortly before Joe Bob indicated his return on Shudder after a long hiatus. Upon completing the letter, Joe Bob harkened back to a personal story from his life.

Anyone who has seen Joe Bob on television or in person knows that he utilizes a slight persona. While under the guise of Joe Bob, he rarely offers in-depth personal stories about his life, but upon completion of this letter, Joe Bob opened up to Darcy, the author, and his audience. Joe Bob disclosed to everyone that when he began his act, his Tonight Show-loving father was not approving. Shortly after his father’s passing, Joe Bob got an offer to be on The Tonight Show but passed because Joe Bob was still reeling. He continued to say that he had another offer to appear on the show and took it. Joe Bob reminisced about the moment before he went on stage and held a pocket knife from his father as he waited behind the curtain, in the darkness, to make his entrance. Then, in true Joe Bob fashion, we transitioned over to a joke before moving on to the second half of the show.

In my eyes, what people will take away the most from Joe Bob Save Christmas is the charity auction, as they should. Up until December 21st, you can see the items for sale on the auction site. The last time I checked, most, if not all, items had bids over $1,000. That is an amazing achievement from the entire Mutant Family and is a testament to the power of Joe Bob and Darcy. 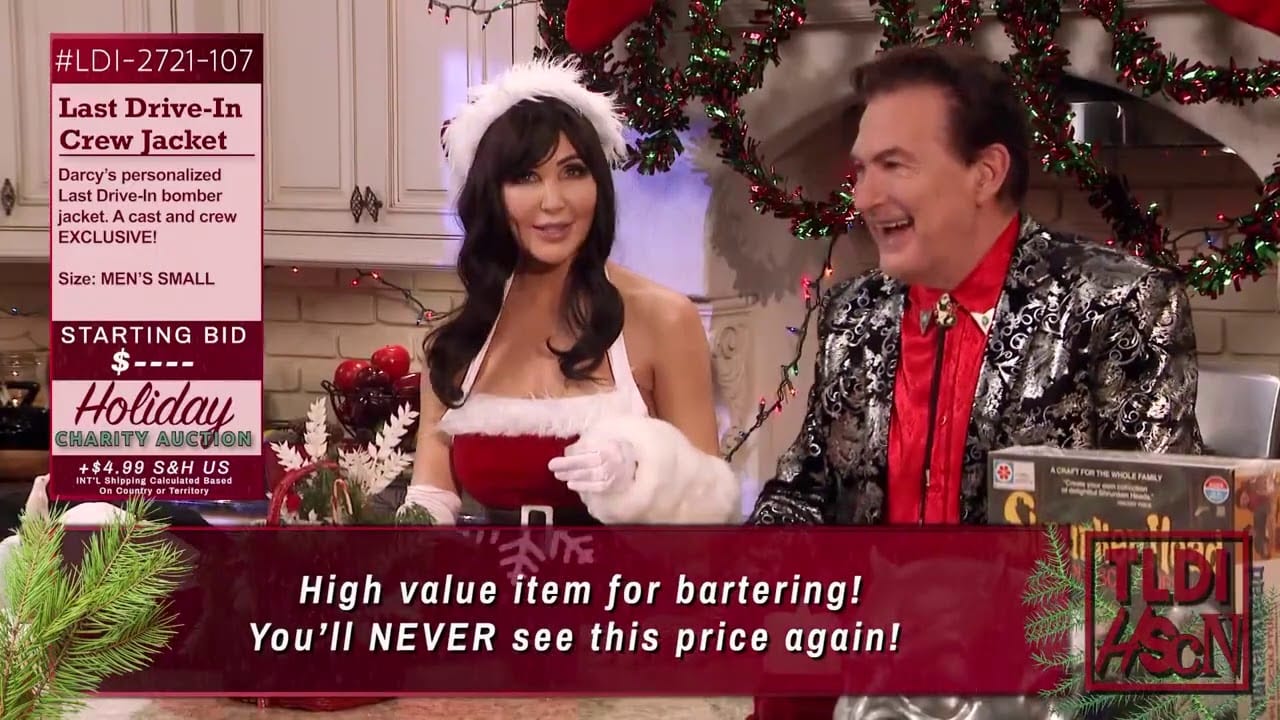 What I took away from the show, though, was seeing a man willing to open up and allow others to glimpse the man behind the curtain. It’s much easier to put a wall up and keep others at bay. Joe Bob is different in that he is an entertainer while I am just a face in the crowd. What Joe Bob did, though, was say to everyone, “Hey, sometimes you can open up a bit. It’s not the end of the world.” Seeing one of my idols take a moment to “get real” was a refreshing sight and struck me in a certain way. Joe Bob has a reputation for being a nice guy and appreciative of his fans, but Joe Bob Saves Christmas went the extra step in providing some much needed holiday cheer for at least one viewer.

Joe Bob Saves Christmas aired on December 11th and is available on-demand on Shudder starting as of December 13th.

If you would like to donate to any of the four charities seen on Joe Bob Save Christmas, the links are below.