As just about anyone who’s been a fan of Joe Bob Briggs or drive-in movie enthusiasts for any length of time will tell you, Joe Bob’s fanbase has long been known as the Mutant Fam, and it has been described as a family by none less than the man himself. I wasn’t able to find it again, but I distinctly remember a tweet from Joe Bob stating what amounts to “We’re a family, we might get loud, we might disagree from time to time, but ultimately we all know to put aside our differences when it’s time to gather around the supper table.” We’re just like the Cleavers from Leave It To Beaver, except more likely to have an actual cleaver or two on hand.

This year, The Last Drive-In‘s season finale happens to fall on the 4th of July weekend, traditionally a time to celebrate the birthday of America and all the greatness we perceive it to stand for, at a time when many are understandably struggling to find anything to be proud of or to celebrate about our country. How can women celebrate the 4th of July, less than two weeks after seeing their rights severely limited following the overturning of Roe v. Wade? How can LGBTQ+ people celebrate the 4th of July, knowing that states are passing so-called “Don’t Say Gay” bills? How can people of color celebrate the 4th of July in a country that seems to see denying them equal opportunities and rights as a cornerstone of its existence, a question asked as far back as 1852 in a famous speech by Fredrick Douglas? How can, well, anyone celebrate the 4th of July, in a country that feels increasingly unsafe and increasingly difficult to live, let alone prosper in? As if to underscore the point, a 4th of July parade in Highland Park, Illinois found itself the site of yet another mass shooting—not even our country’s birthday can offer reprieve from a seemingly non-stop barrage of gun violence that appears to have no signs of stopping.

It’s a harsh reality that Joe Bob, Darcy, and company are no doubt aware of, and while there was still a fair amount of comfort to be found in huddling up with the full Mutant Fam on Friday night (I worked late and had to catch the reruns on Sunday), the two films that were chosen to wrap up The Last Drive In‘s fourth season feel like very deliberate choices, and that there’s a lesson or two Joe Bob and his crew want us to take from each one. First up on the docket: Larry Cohen and Bill Lustig’s Uncle Sam. Cohen and Lustig are both well known to fans of The Last Drive-In—previous episodes have featured Cohen’s Q: The Winged Serpent and The Stuff, as well as a double feature of the previous Cohen/Lustig collaborations Maniac Cop and Maniac Cop 2. 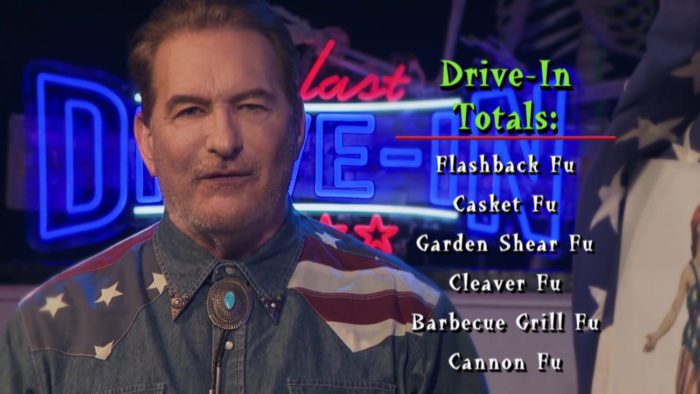 Diving into the history of Uncle Sam—after diving into the history of, well, Uncle Sam—Joe Bob explains that it came a few years after the two Maniac Cop films and in many ways feels like an attempt to recapture the glory of the 80’s style slasher. Joe Bob also notes that the film ultimately feels like a fairly restrained effort from both the writer and director: it lacks Larry Cohen’s typically sharp dialogue and Bill Lustig shows an unusual amount of restraint when it comes to the kills and the gore.

Instead, what we get is perhaps one of the most on-the-nose films I’ve seen in years. “Uncle Sam” is Master Sergeant Sam Harper, a supposedly heroic soldier who fought in Desert Storm before getting shot down by friendly fire. He’s ultimately revealed to be an alcoholic and abusive individual who terrorized both his sister and his wife, who joined the Army because he loved killing and would eventually go on a killing spree as some sort of reanimated figure. Meanwhile, we have Sam’s nephew Jody, who idolizes him and wants to follow in his footsteps while parroting the ultra-nationalistic rhetoric he reads in Sam’s letters, Isaac Hayes as the only surviving member of Sam’s unit, trying to talk Jody out of his dreams of military glory by telling him both what war is really like and what Sam was really like, and it’s all set in a Norman Rockwellesque middle American town seemingly inhabited by nothing but all matter of sleazy, two-faced types.

The film is a little clumsy in its execution—especially given that there’s no explanation for Sam’s reanimation or any of his other supernatural abilities—but where it shines is in that on-the-nose commentary and themes that feel pitch-perfect for this year’s 4th of July. Lesson numero uno-oh: Don’t blindly glorify anything or anyone at face value, especially not to the point where you refuse to think critically about it or see its flaws. Uncle Sam never tries to say that all soldiers are like its titular villain, but what it does say is that someone fighting in a war isn’t automatically a hero or even necessarily a good person, that wrapping something or someone up in patriotic ideals doesn’t necessarily make them right.

Second up for the night: Clive Barker’s Nightbreed, and in an unusual turn for The Last Drive-In what we got to watch was the director’s cut of the film, restored years after the fact. As Joe Bob—ever the drive-in scholar and historian—explains to us, the original cut of the film was subjected to extreme meddling from the studios involved. Where some films are troubled productions, Nightbreed was, if anything, a troubled post-production: the studio ordered script and editing changes so extensive that both the original editor and Clive Barker’s producing partner wound up quitting, over fifty minutes of footage would be cut for the theatrical release, new scenes would be added to try and make the film into more of a traditional slasher and the ad campaigns didn’t even show any of the two hundred monsters that the film was heavily focused on. The end result was a disjointed flop that would leave Barker with no desire to direct again, and the one film he would direct afterward feels like one done more out of contractual obligation than anything else.

Thankfully, after demand from a small but dedicated fanbase years later, both a work print DVD and roughly five hundred boxes of 35mm film would be discovered by Mark Miller, one of Barker’s friends and an employee at his production company. Work was done with an editor to painstakingly put the film back together in the correct order, matching it up with the sound from the work DVD and the end result is described by Joe Bob as “the most ambitious monster movie ever made.” 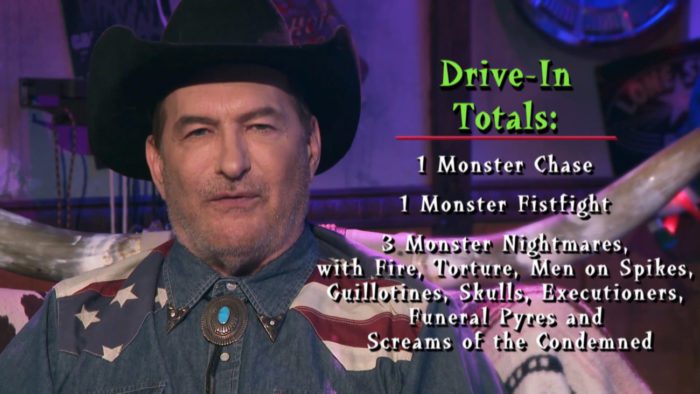 Nightbreed is a film that has to be seen to be believed: part monster movie, part biblical epic, part slasher, and part love story. It first follows Boone, a man being framed for the murders committed by his therapist (played to chilling perfection by David Cronenberg, yes that David Cronenberg), who he had been seeing to try and help him with the nightmares he had been having of monsters and a place called Midian. He’s eventually hunted down and killed by the local police, but the place he gets gunned down happens to be the cemetery above Midian, where he finds refuge among the undead monsters who dwell there, known as the Nightbreed. Then, we follow Boone’s girlfriend as she attempts to find and reunite with him, her odyssey into the underground world of Midian, and her eventual reunion with Boone as they save the dwellers of Midian and eventually join them in the night forever.

It almost seems like an allegory of sorts to someone finding their way into the Mutant Fam or the horror community at large: an odyssey into a dark underworld, encountering the unusual and seemingly frightening people who dwell there, realizing that they’re not as scary as you had thought—at least, not compared to the supposedly ordinary people you know—and eventually realizing that their community is where you truly belong and being welcomed to join them with open arms. Meanwhile, Joe Bob makes the observation that we see the relative purity and peacefulness of the “monstrous” beings of Midian contrasted against the three pillars of civilization: religion, police, and medicine, represented by the priest getting bossed around by the cops, the shoot now, ask questions later cops, and the psychoanalyst who’s actually been going around and slashing throats. Yes, it is in very large part a “the monsters aren’t actually monsters and the true monster is society” type deal, but trust me, my description is no doubt failing to do Nightbreed justice. 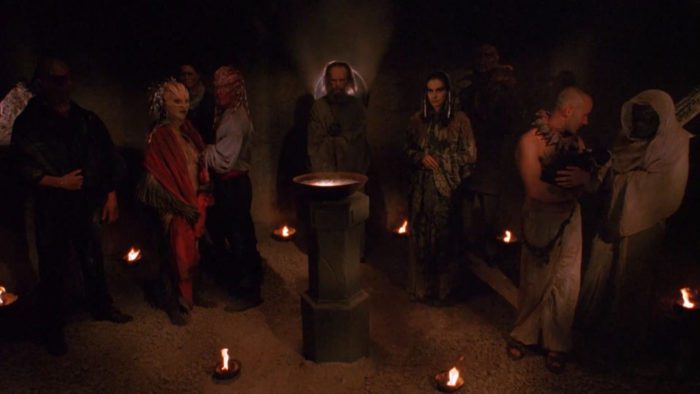 But what ultimately drives Nightbreed is, oddly enough, love. The love between Boone and Lori that not even Boone’s “death” can destroy, the love that leads her back to him and the two to eventually find where they truly belong: together among the Nightbreed for all eternity. The love shared among the community of the Nightbreed, love that is extended without question to anyone who joins that community. Even the love of a fanbase for a film that could have been, love that allowed us to even see the film the way Clive Barker imagined it to be—and the love that our fanbase has for Joe Bob Briggs which keeps him coming back for more episodes of The Last Drive-In. Lesson numero two-oh: the horror community is one that is ultimately brought together by love and acceptance, and that no matter who, what, or where you are or however alone you might feel, as a member of that community you are never truly alone, no matter how dark it might seem or how lost you might feel.

This point is spelled out by Joe Bob himself, who takes to the stage after Nightbreed is finished to deliver a rousing Patton-style speech. The latter half of said speech is of particular noteworthiness: “…A mutant realizes he’s not alone. He is never alone. He can’t be alone. That every time he assumes he’s powerful enough to be truly independent, he gets whacked upside the head by the realization that he’s supported by thousands of people who don’t even know his name but protect him from his own mistakes and his own worst instincts and his own actions that make him deserving of being hounded into oblivion, people who practice the same religion of forbearance and forgiveness and acceptance and love. That’s why we win, and we’ll continue to win. And I will be proud to lead this ragtag group of outcasts and misfits and losers anytime, anywhere. That is all.”

Tonight’s pair of films were both a 4th of July celebration and a season finale in a way that only  The Last Drive-In could do. But thankfully, that will not be all. Shudder has already announced that The Last Drive-In will be returning for a fifth season, along with the customary holiday-themed specials to give us our much-needed fix of Joe Bob, Darcy, and the entire Mutant Fam community throughout the year. Until then, let it be known so long as there is even but one single brave soul willing to stand up in the name of Mutants everywhere, that the drive-in will truly, never die.