Universal’s Mummy franchise has fallen on some hard times as of late. While I enjoyed the 2017 reboot, I’m very, very much in the minority on that, and the Brendan Fraser films from about twenty years ago are guilty pleasures at best. The studio just can’t seem to get this monster right anymore, and it’s a real shame. The original The Mummy is right up there with Frankenstein, Dracula, and The Wolf Man as one of the greatest monster movies ever made, and it spawned one of the most influential horror franchises of all time.

For example, Hammer rebooted this creature during its heyday back in the 1950s, and every subsequent iteration of the monster is basically just a knock-off of the Universal films from the 1930s and 1940s. The templates these movies set haven’t changed much in the almost ninety years since the first one came out, so if you want to understand the history of mummies in horror, you have to be familiar with this franchise.

But you don’t need to watch all of these films. Like any longstanding horror series, some entries are essential and some are disposable, so you can get away with skipping a few of the lesser titles. To help you know which those are, I’ve ranked all six entries in Universal’s classic Mummy franchise, so let’s get started and see which ones you should avoid and which you should add to your to-watch list. 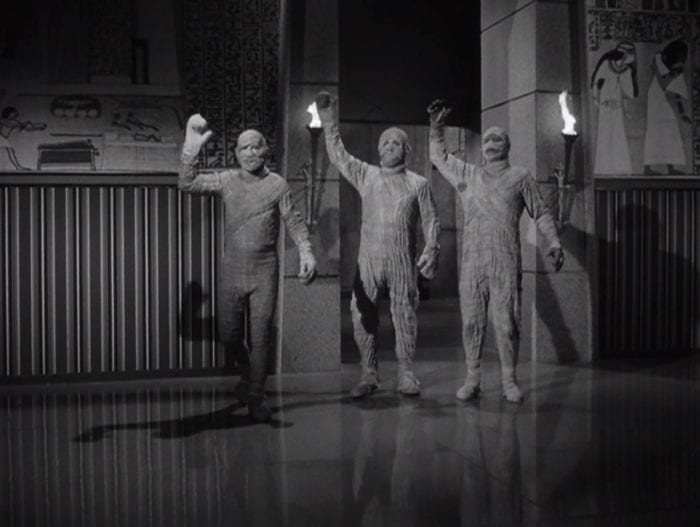 As much as it pains me to say it, Abbott and Costello Meet the Mummy is hands down the worst movie in this entire franchise. I’m usually a big fan of the comedic duo, but by the time they made this film, they had run out of steam. While it still has a few gags that work, there are just way too many that don’t. On the whole, the humor falls almost completely flat, and that pretty much kills the entire movie.

See, this is a comedy above all else, so the other elements of the film are simply too thin to carry it on their own. For example, the story is ridiculous, the characters are little more than fodder for the jokes, and the mummy himself looks like a cheap Halloween costume. Abbott and Costello Meet the Mummy is just not a good movie, so unless you’re the hardest of hardcore completists, your best bet is to skip this one and forget it was ever made. 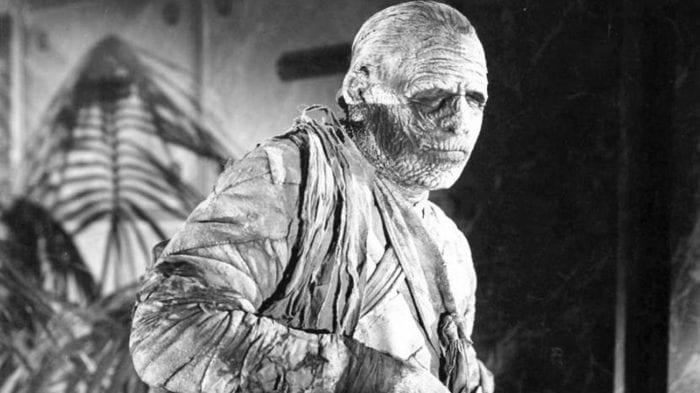 The third film in the franchise, The Mummy’s Tomb is pretty much a proto-slasher. It’s all about the mummy’s quest to kill the remaining characters from the previous movie along with their blood relatives, so the plot is basically just him going on a murderous rampage. That may sound intriguing to some, but unfortunately, just about everything in this movie is pretty uninspired.

To take just one example, when the murders start, nobody knows who’s committing them. Apparently, the super slow-walking mummy is a master of stealth, so all anybody sees is a spooky shadow that comes and goes before they can get a good look at it. That’s really lazy storytelling, and pretty much everything else in this film is equally eye-roll-inducing.

Its only saving grace is the mummy himself. He looks really cool, and he’s played well by the great Lon Chaney, Jr., so whenever he’s on-screen, he’s always a treat to watch. Unfortunately, up until the third act, those times are relatively few and far between, and you’ll often find yourself wondering when the boring human parts will finish so you can get back to the fun mummy action.

In a nutshell, I’d say that The Mummy’s Tomb isn’t a complete waste of time, but it’s not a movie that anybody but the biggest mummy fans really needs to see. The horror scenes are pretty cool, so there is value here, but if you want to scratch that mummy itch, you’re better off checking out some of the better films in the franchise instead. 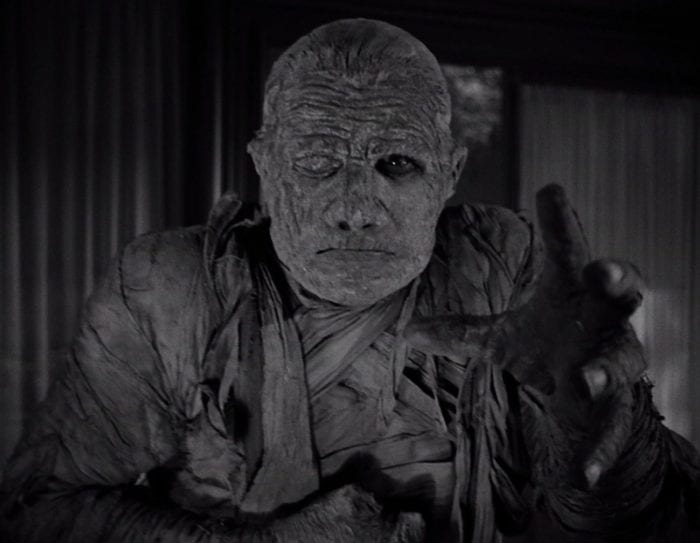 The Mummy’s Ghost is the sequel to The Mummy’s Tomb, and in a lot of ways, it’s basically just a rehash of its predecessor. The film has a similar proto-slasher feel, the mummy scenes are pretty cool, and for some strange reason, nobody ever sees the creature as he walks around the town killing people.

That being said, this film does have one thing over The Mummy’s Tomb. In this story, killing people isn’t the monster’s real goal. Instead, he’s trying to retrieve the mummy of a princess he’s supposed to protect, and he simply murders a bunch of people along the way. However, unbeknownst to him, the soul of this princess has been reincarnated, so his task isn’t quite as simple as just getting the body and bringing it back to Egypt. That complication adds a little twist to the story and elevates it a bit above its predecessor, so if you just want to sit back, turn your brain off, and enjoy a mindless mummy movie, The Mummy’s Ghost is exactly what you’re looking for. 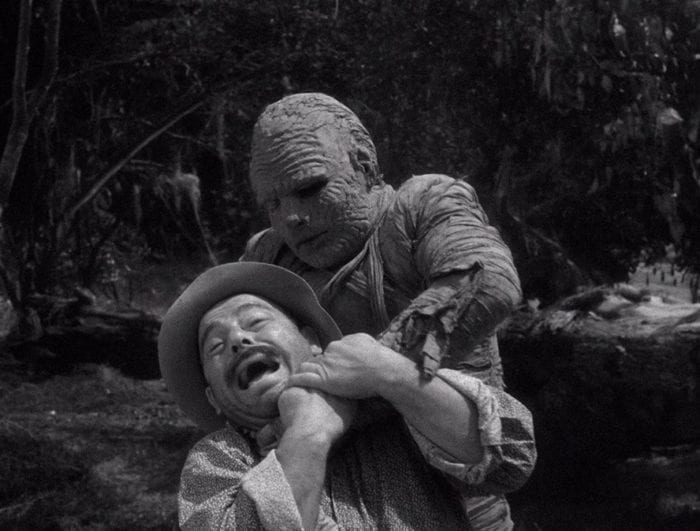 The Mummy’s Curse is the fifth and final entry in Universal’s main Mummy series (the Abbott and Costello film is an unconnected standalone story), and like the two previous movies, this one also has a proto-slasher feel. Once again, the titular monster goes around the town killing people, and just like its immediate predecessor, this one also features a reincarnation storyline. It’s very similar to The Mummy’s Ghost in a lot of ways, and in terms of quality, the two films are more or less on par with each other.

The one thing that gives this movie a slight edge is its characters. Except for the first two films, Universal never put much effort into the characters in this franchise, but this one is a bit of an exception. Sure, most of the people in this movie are flat and lifeless, but a few of them are a little more interesting. Most notably, there are two Cajun characters who are fun to watch no matter what they do, and while they’re not enough to make The Mummy’s Curse great, they do make it a little bit better than its predecessor. 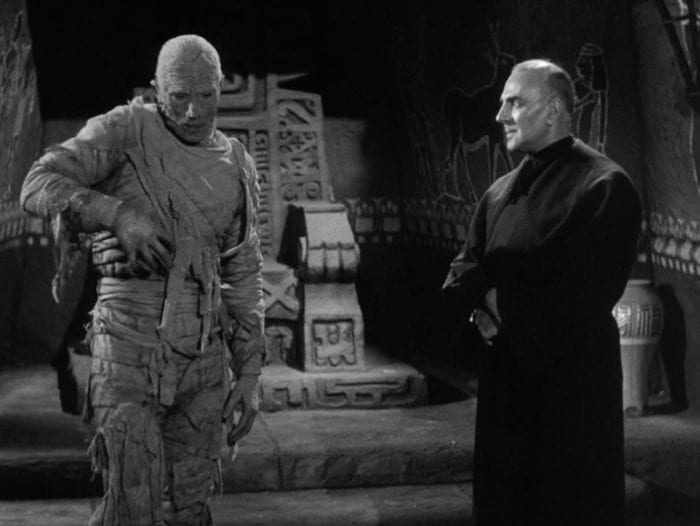 The Mummy’s Hand is the second entry in Universal’s classic Mummy franchise, but it’s not actually a sequel to the original film. It’s more of a reimagining with a different mummy and slightly different mythology, and the rest of the franchise (except the Abbott and Costello movie) followed its lead. It’s about a group of archeologists who seek to uncover the tomb of an ancient Egyptian princess named Ananka, but instead, they unknowingly awaken the wrath of the mummy Kharis, Ananka’s ancient lover and the protector of her eternal resting place.

This isn’t an all-timer like the original, but it’s much better than all of its sequels. For starters, the horror scenes are all really cool, and the majority of the main characters are likable and interesting. On top of that, The Mummy’s Hand is also pretty funny. It’s not a full-on comedy, but it has more than its fair share of laughs. Even though I’ve seen the movie more times than I can count, it still gives me a whole bunch of chuckles every time I watch it.

Finally and most notably, this film is the birth of the common mummy archetype we know and love today, the one with ragged bandages falling off its body and a slow, limping gait. While the original movie briefly featured this kind of mummy in the opening scene (he’s much more human the rest of the time), The Mummy’s Hand was the first time the monster stayed that way from beginning to end. It’s a very important film in the history of the genre, and when you add that to its other strong points, you get the second-best entry in Universal’s classic Mummy franchise. 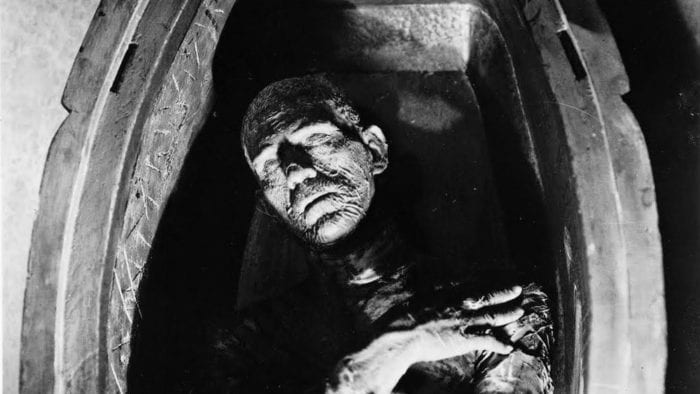 As with almost all of the Universal Classic Monster franchises, the best Mummy movie is the original. It’s a chilling tale about love, magic, and ancient curses, and in typical Universal Monster fashion, it features a great villain who’s equal parts scary and sympathetic.

Played by the great Boris Karloff, the mummy Imhotep has waited thousands of years to be with his beloved Anck-su-namun. She was tragically taken from him during his former life in ancient Egypt, and now that he’s back in the world of the living, he’s on a mission to get her back. He thinks that a woman named Helen Grosvenor is his lover’s reincarnation, and he wants to kill her and resurrect Anck-su-namun in her body.

This very human motivation makes Imhotep much more than just a mindless force of nature or the embodiment of evil. You understand why he does what he does, and that makes for a much more interesting monster than we get in any of the later films. That alone propels The Mummy to the top of this list, but it’s not the only thing this movie has going for it.

It also features wonderful performances from Boris Karloff as Imhotep and Edward Van Sloan as Dr. Muller, a believer and authority on ancient Egyptian magic, and when you put all these pieces together, you get not only the best entry in Universal’s classic Mummy franchise but arguably the best mummy movie of all time.