Way before modern franchises like Friday the 13th, Saw, and Paranormal Activity were even twinkles in their creators’ eyes, there was another horror series that churned out sequel after sequel with sometimes reckless abandon: Universal’s classic Frankenstein franchise. These films laid a lot of the groundwork for what the horror genre would become in subsequent decades, and you almost certainly wouldn’t have those later franchises if it weren’t for the 1931 classic Frankenstein and its army of follow-ups.

So how do these movies stack up against one another? Most people know that the original and its first sequel, Bride of Frankenstein, are the two best, but which one is better? And which (if any) of the later films are worth watching? Those are the questions we’re going to be tackling here, so whether you’re a longtime fan of these movies or you’re coming across them for the first time, let’s take a look at how I rank all eight of Universal’s classic Frankenstein films. 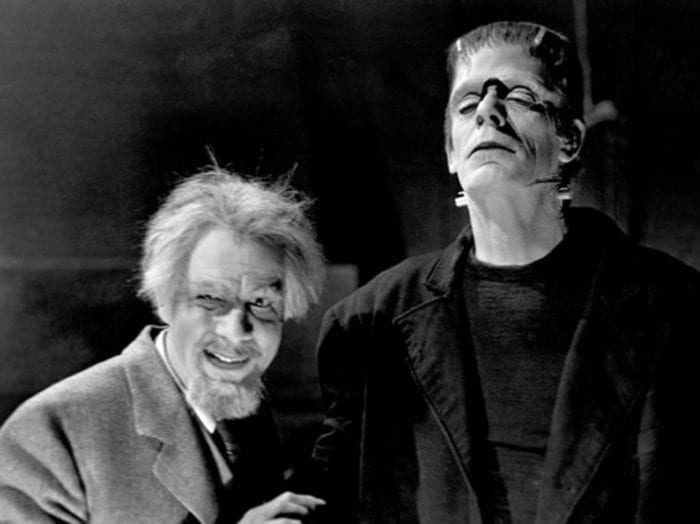 House of Dracula was the last entry in Universal’s shared monster universe of Dracula, Frankenstein, and the Wolf Man (Abbot and Costello Meet Frankenstein came out later, but it’s best viewed as a one-off story in a separate timeline), and after watching it, you’ll know why they didn’t continue the series. This is simply not a good movie.

It has way too many problems to adequately cover in one small section of an article, but here are some of the most egregious: Dracula’s plan is pretty ridiculous and convoluted; the film almost completely defangs the Wolf Man and makes him a scientific oddity rather than a genuinely supernatural terror (against everything the previous movies led us to believe); and the story utterly shortchanges Frankenstein, relegating him to little more than a glorified encore.

With those weaknesses as well as a whole host of others, House of Dracula isn’t the only bad movie in the franchise, but it’s hands down the worst. I’d recommend watching it only if you’re a completist, so if you don’t feel a burning need to see it for yourself, you’re better off just skipping it. 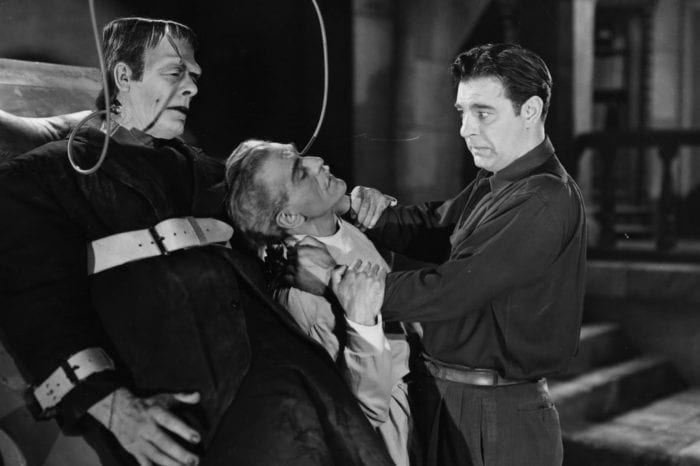 House of Frankenstein was the penultimate film in Universal’s monster universe, and it was the first time the studio brought together all three of its major monsters. As you might’ve guessed from its low placement, it’s a pretty weak movie. It actually starts off with a fairly decent setup, but then it quickly takes a steep nosedive in quality.

The main problem with this film is that it doesn’t integrate its three monsters in a satisfying way. While Frankenstein, the Wolf Man, and Dracula are all in it, they never really interact with one another. For example, the first one to show up is Dracula, but he dies before the movie even introduces the other two.

Similarly, even though the human characters stumble upon Frankenstein and the Wolf Man at the same time, Frankenstein spends almost the entire rest of the film in a more or less comatose state, just waiting to be revived. Then, by the time he finally does get his strength back, the Wolf Man is already dead.

So if you go into House of Frankenstein expecting an all-out monster mash, you’re going to be disappointed. To be frank, you’ll be disappointed if you expect a good movie at all. It’s not the worst entry in Universal’s Frankenstein franchise, but it’s still not one that anybody but the most hardcore fans needs to bother with. 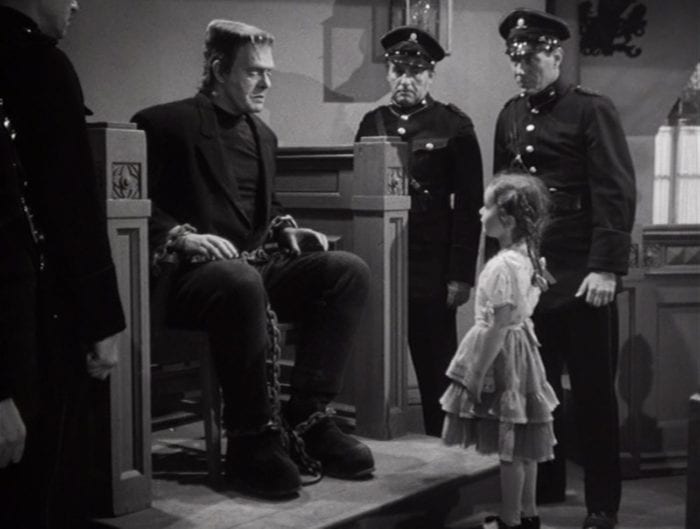 The final solo Frankenstein film that Universal made, The Ghost of Frankenstein was also the first time someone other than Boris Karloff played the monster (that honor went to Lon Chaney, Jr.), and it shows. You don’t realize how great Karloff was until you see someone else try to fill his shoes. It’s not that Chaney was bad. Far from it. Karloff was just so good that you really miss him no matter who else was in the role.

But other than that, this movie is pretty enjoyable. Bela Lugosi reprises his role as the fantastic hunchback villain Ygor, and the story is engaging enough that you don’t get bored with it. It’s nothing groundbreaking, but at a brisk sixty-eight minutes, it doesn’t need to be. There are much worse ways to spend that time, so if you’re a fan of Frankenstein or of Universal’s classic horror films in general, The Ghost of Frankenstein is definitely worth a watch. 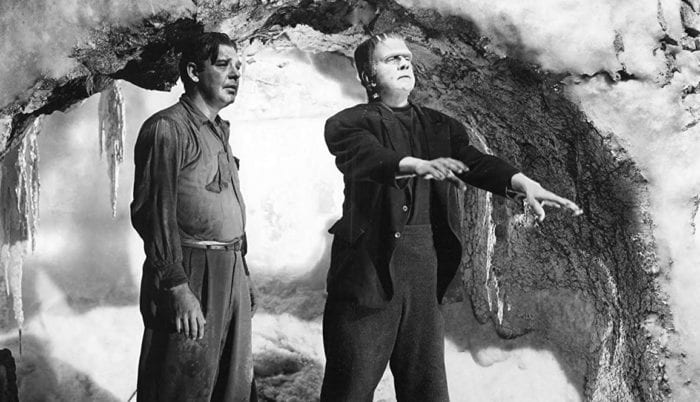 Frankenstein Meets the Wolf Man was the first time Universal crossed over any of its monster franchises, and the results were a bit mixed. On the one hand, the titular fight is pretty disappointing. It promises an epic battle of titanic proportions, but what we get instead is the Wolf Man climbing up some laboratory equipment and jumping onto Frankenstein a few times in a row. That’s basically the entire fight, and it’s a big letdown.

On the other hand, everything leading up to that finale is pretty enjoyable. It’s not exactly the most sophisticated story in the world, but it’s well done for what it is. Lon Chaney, Jr. plays the Wolf Man’s alter ego Lawrence Talbot just as brilliantly as ever, the eponymous monsters both get their time to shine, and the narrative brings them together in a fairly believable way.

So all in all, as long as you manage your expectations and understand what you will and won’t be seeing, Frankenstein Meets the Wolf Man is a pretty fun entry in Universal’s Frankenstein series. It’s far from great, but it’s the best of the franchise’s lower-tier movies. 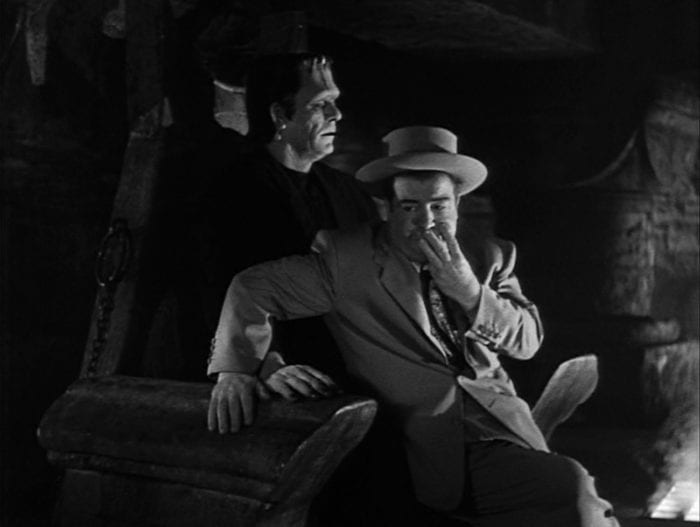 Abbott and Costello Meet Frankenstein is one of the greatest horror-comedies that most people have never seen. It showcases the classic duo of Bud Abbott and Lou Costello at their comedic best, and even though I’ve seen it many, many times since I was a kid, there are still numerous scenes that make me literally laugh out loud every time I watch it.

On top of that, the film also atones for some of the missteps of House of Frankenstein and House of Dracula. In addition to its titular monster, it features Dracula and the Wolf Man too, and we actually get to see the three of them interact with one another and cause some mayhem together.

Sure, this movie has its flaws, but it’s so much fun that those flaws don’t really matter. It’s one of the funniest horror-comedies I’ve ever seen, and it’s the only time Universal ever made good on its promise of a genuine monster mashup. Abbott and Costello Meet Frankenstein more than earns its spot as a top-tier entry in the Frankenstein franchise, and it deserves way more love than it normally gets among horror fans today. 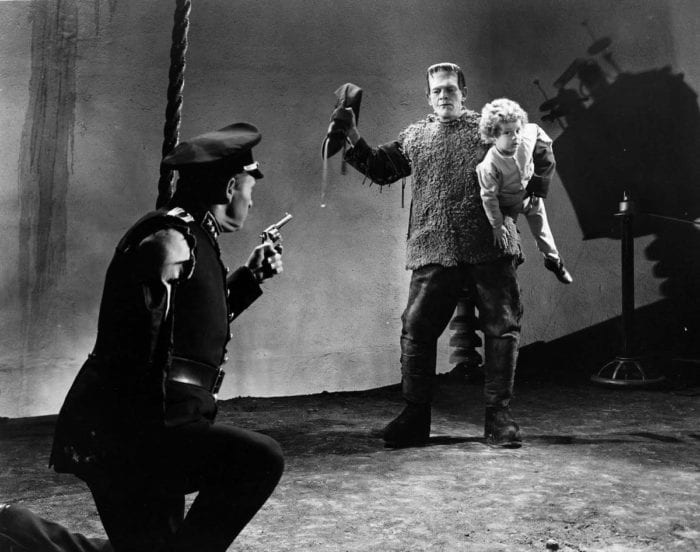 As the third movie in the series, Son of Frankenstein can seem like a bit of a letdown. It’s not an all-time classic like the first two, and it’s rightly left out of the pantheon of Universal’s best monster films. But if we just accept it for what it is and judge it on its own merits, this is actually a really good movie.

It’s the last time Boris Karloff ever played Frankenstein, and while he’s not given as much to do here as in the previous films, he’s still leaps and bounds ahead of his replacements in the later sequels. This is also the first time Bela Lugosi played Ygor, and as good as he was in The Ghost of Frankenstein, he’s even better here. In fact, the acting is really good all around, and that’s hands down the best thing about this film.

On the negative side, the movie’s only real weakness is its plot. It’s basically just an excuse to see Frankenstein and Ygor cause a bunch of mayhem, so while it’s not a bad story, it just doesn’t have the emotional or intellectual depth of the first two films. But in the grand scheme of things, that’s a relatively minor complaint. I’ll take any excuse to watch these great characters ten times out of ten, so at the end of the day, Son of Frankenstein is still one of the very best Frankenstein movies Universal ever produced. 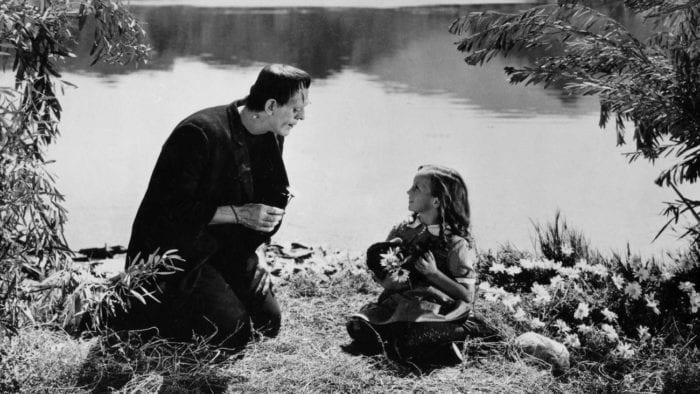 He makes you really believe that he’s a newborn trapped in the body of a giant, so you genuinely feel for him when characters treat him like a monster. Even though you know he’s a danger to the lives of the people around him, you can’t help but feel conflicted when everybody from his maker to the entire village turns on him and tries to kill him.

What’s more, this movie also features a bevy of fantastic human characters, a whole slew of memorable scenes that will stick with you long after the credits roll (like the famous “It’s alive!” moment), and an intriguing plot that raises thought-provoking questions about life, death, and the moral limits of scientific research. There’s so much to love about Frankenstein, and its few flaws are so slight they’re not even worth mentioning. This is an absolute must-see for any serious film fan, and I fully expect people to continue talking about it for at least another ninety years. 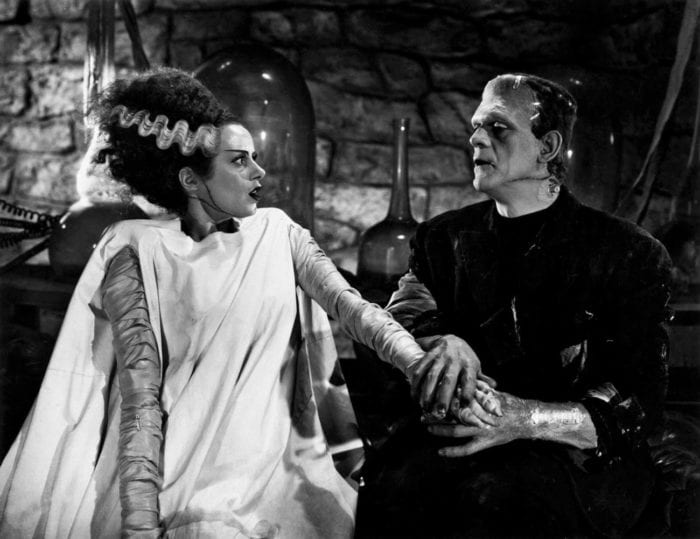 After praising Frankenstein so highly, you might be wondering how I could possibly put the sequel in the number one spot. Is it really better than the original? Yes, it is. See, there are a lot of great things about that first movie, but Bride of Frankenstein takes the best one, amplifies it exponentially, and executes it to absolute perfection.

If you thought you could sympathize with the monster before, just wait till you see him in this movie. He becomes the ultimate misfit, the cinematic patron saint of everybody who’s ever been bullied, made fun of, or ostracized just because they were different.

Frankenstein tries to be good, but the human characters never give him a chance. Even when he befriends a blind hermit in the woods and doesn’t bother anybody, the villagers still manage to intrude on his peaceful existence and destroy the happy life he’s built for himself. He acts like a monster only because people treat him like one, and it’s absolutely heart-wrenching.

Then, at the very end of the movie, he feels the sting of rejection one last time, and it proves to be one time too many. The not-so-good doctor and one of his former professors create a female monster to give Frankenstein the companionship and love he so desperately desires, but she too finds him revolting. It absolutely devastates him, and the pain he visibly feels shatters your heart into a million pieces too.

This tragic element is the best thing about the entire Frankenstein mythos, and it’s never been done better than it was in Bride of Frankenstein. It cements the movie as one of the greatest tragedies ever shown on the big screen as well as the best entry in Universal’s classic Frankenstein series.