We horror fans love our meta horror. Whether it’s Scream, Behind the Mask: The Rise of Leslie Vernon, The Cabin in the Woods, or a million films, we can’t get enough of this stuff, and I’m no different. It’s one of the reasons why I’m such a huge supporter of Wes Craven’s New Nightmare, and it’s also one of the reasons why I love another underrated genre gem: Frankenweenie.

If you’re a fan of classic monster movies but you haven’t seen Frankenweenie, that needs to change. It’s a fantastic horror-themed riff on the classic “boy and his dog” trope, but it does more than just tell a heartwarming story. It also features a whole bunch of allusions and homages to classic creature features from the Universal Monsters to Japanese kaiju, so it’s basically a monster lover’s paradise.

The film’s entire runtime is loaded with these fun references, so there’s no way I could fit them all into a single article. Instead, I’ve compiled a list of eight of my favorite movies and monsters that Frankenweenie alludes to, so hopefully it can give you a taste of just how much this film truly loves its cinematic forebears. 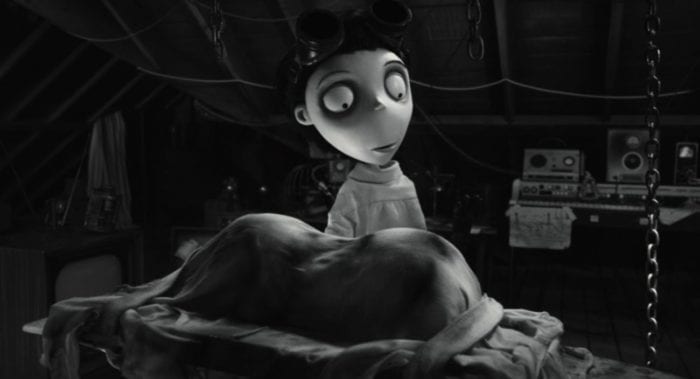 Right off the bat, before you even see a single frame of Frankenweenie, the name alone clues you into its biggest and most pervasive classic monster influence. Just about everywhere you look in the story, there’s some sort of reference or homage to Frankenstein. Most of the time it alludes to the 1931 film starring Boris Karloff, but every once in a while it’ll reference some other iterations as well.

In fact, you could probably write a whole article just on the many ways Frankenweenie pays homage to the Frankenstein mythos, so I’m not even going to try to cover them all. I’m just going to point out a few of my favorites, and I’ll leave it to you to find the rest the next time you watch the film. For starters, the entire plot is a riff on Frankenstein. The main character is named Victor Frankenstein, just like the famous scientist from Mary Shelley’s novel, and he stitches his dead dog Sparky back together and revives him, just like Dr. Frankenstein stitches together pieces of dead bodies and gives life to the new person he created.

Beyond that, there are also a bunch of little details that harken back to more specific elements of the Frankenstein story. For example, the scene where Victor reanimates his dog is very reminiscent of the scene in the 1931 film where Frankenstein finally succeeds in giving his monster life. Even Victor’s clothes are almost identical to his namesake’s in that sequence. There’s also a hunchbacked kid in Victor’s class named Edgar “E” Gore, and he’s a clear reference to Igor (sometimes spelled Ygor), the classic stock character you often see in various iterations of the Frankenstein story.

Another cool Easter egg is Victor’s neighbor, Mr Burgermeister. He’s the town’s mayor, and he alludes to a somewhat obscure figure who pops up a few times in the classic Universal Frankenstein franchise. In some of those movies, there’s a village official called the burgomaster (an alternative spelling of burgermeister), and much like a mayor here in America, the burgomaster is also the head of his town or city.

Finally, there’s also a little reference to Mary Shelley, the author of the original book this entire mythos is based on. At one point in the film, we meet a turtle named Shelley, and at first, you might think nothing of it. Turtles have shells, so that sounds like an appropriate name. However, since there’s only one “e” in “shell,” we would expect this name to be spelled “Shelly.” But it’s not. It’s spelled exactly like Mary Shelley’s last name, so this is a clear homage to the creator of Frankenstein.

Like I said before, those are just some of the ways Frankenweenie alludes to the classic Frankenstein story, but they’re not the only ones. If you watch this movie back to back with the 1931 Boris Karloff classic, you’re sure to find a whole bunch more.

But that original movie isn’t the only entry in the franchise that Frankenweenie references. There are also some clear allusions to its sequel, Bride of Frankenstein. Most obviously, one of Victor’s neighbors has a female dog whose hair is shaped exactly like the Bride’s, and at one point in the film, an electric shock turns part of that hair white, mimicking the white streak in the Bride’s signature look.

On top of all that, there’s also a super subtle reference that you won’t catch unless you really do your homework on the classic Universal monster films. This dog’s owner is named Elsa Van Helsing, and at first, you might think that only her last name matters (we’ll get to why in the next section). But you’d be wrong. Her first name is actually an allusion to one of the key players in Bride of Frankenstein. The actress who played the Bride was named Elsa Lanchester, so it’s no coincidence that Elsa is the owner of the dog that sports the Bride’s hairdo. 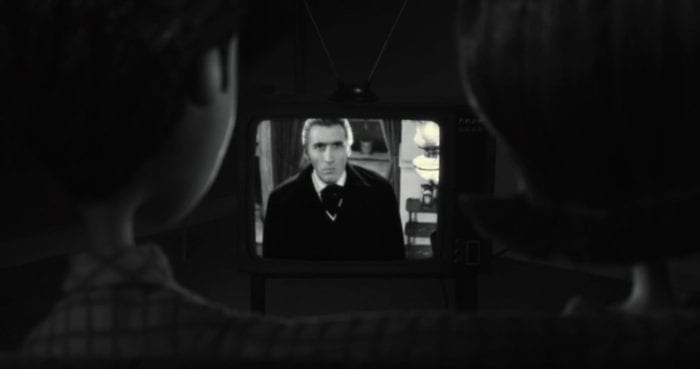 Somewhat surprisingly, I didn’t catch too many Dracula references in Frankenweenie, but the ones I did notice were pretty big. For starters, as I said before, Elsa’s last name is Van Helsing, and that very obviously recalls Abraham Van Helsing, the famous vampire hunter in the Dracula mythos.

In addition, there’s also a really special homage to Christopher Lee’s version of the bloodsucking count. When Victor comes home after digging up Sparky’s corpse in the cemetery, his parents are watching Horror of Dracula on TV, and this brief clip of the movie is the only part of Frankenweenie that’s live-action. The rest is all stop-motion animation, so this singular exception clearly shows how much Tim Burton loves Christopher Lee’s portrayal of Dracula.

If you’re a fan of Japanese kaiju films, you know who Gamera is. While Godzilla is hands down the country’s most famous larger-than-life export, the number two spot has to go to Gamera, a giant flying turtle who’s way cooler than you’d guess from that description alone. He was introduced in the 1965 film Gamera, the Giant Monster, and over the years his franchise has grown to a total of twelve films.

He’s a giant of the kaiju subgenre (pun totally intended), and Frankenweenie pays homage to him in a really cool way. In the third act of the film, a bunch of the town’s kids use Victor’s methods to bring their own dead pets back to life, and one of them, a boy named Toshiaki, revives his dead turtle Shelley. Immediately after coming back, the turtle gets covered in Miracle-Gro and shoots up to gigantic proportions, and he becomes a clear homage to the most famous giant turtle of them all. 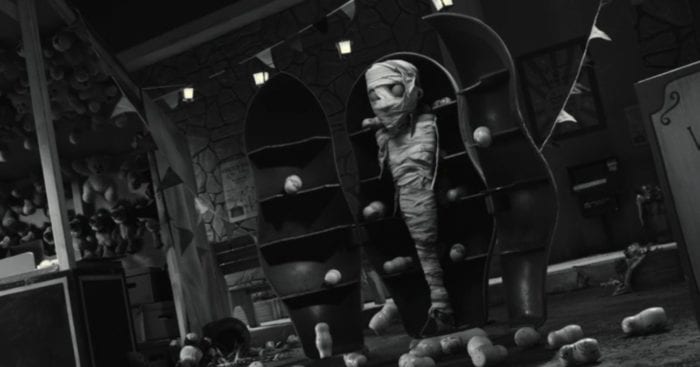 Much like the Gamera reference, the allusion to the Mummy (the monster, not any specific film) in Frankenweenie also comes after the kids reanimate their dead pets. One of them, a boy named Nassor, brings his dead hamster Colossus back to life, and when the animal comes out of its mausoleum, it’s wrapped in bandages like a mummy and it has the slow, limping gait that we normally associate with these monsters.

Then, later on in the film, Nassor gets blown through some bunting, and it wraps him up just like a mummy. As luck would have it, his trajectory ultimately lands him right in the middle of a triptych-like shelf, and at the end of the shot, the shelf closes in on him just like an ancient Egyptian sarcophagus, making it crystal clear just what classic monster he and his pet are supposed to allude to. 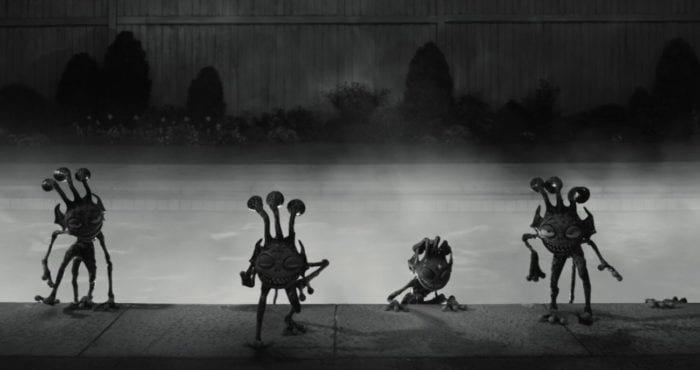 Along with Toshiaki and Nassor, there’s one more kid who revives his dead pets, and this boy chooses to bring his sea monkeys back from the grave. Unfortunately, these reanimated sea monkeys turn into strange, amphibious humanoids, and they’re very reminiscent of the creatures from Gremlins. Admittedly, there’s no one specific thing that makes this allusion impossible to miss, but on the whole, they move around and cause general mayhem just like those loveable little monsters from the 1980s.

Frankenweenie opens with a monster movie that Victor made with his dog Sparky, and it’s about a giant Pteranodon attacking a city. The scene doesn’t give us too much to go by, but if you’re a fan of kaiju films, this allusion is clear as day. While several movies feature similar creatures, there’s one flying monster that stands head and shoulders above the rest: Rodan. He’s most famous for helping Godzilla defeat some of his toughest foes like Ghidorah and Mechagodzilla, but he actually debuted in his own film in 1956, in which he attacks humanity just like the Pteranodon in Victor’s movie.

Most people today think of Bela Lugosi’s Dracula as the godfather of vampire movies, but that’s not actually the case. Sure, it’s the most famous vampire film of all time, and Lugosi pretty much is Dracula, but about ten years earlier, there was another movie based on Bram Stoker’s novel that gave us an even scarier version of the Transylvanian bloodsucker: Nosferatu. It tells the classic tale in a unique way that sets it apart from most other Dracula adaptations, and there’s a scene in Frankenweenie that subtly but lovingly pays tribute to it.

When Edgar leads the other kids to Victor’s lab in the Frankensteins’ house, the film does something that may seem odd at first. As they walk up the stairs, we don’t actually see any of them. Instead, we just see their shadows on the wall, and if you don’t get the reference, this probably seems like a really strange cinematographic choice. However, if you’ve seen Nosferatu, you know exactly what Frankenweenie is doing. There’s a scene in that movie where the vampire, Count Orlok, goes up a flight of stairs to reach his next victim, and instead of showing us the count himself, the film just shows us his shadow. It’s a beautiful shot, and if you’ve ever seen it, it’s clear that Frankenweenie is paying tribute to it when it shows us the kids’ shadows as they walk up the stairs to Victor’s lab.