How far would you go to save your son? Well, for Laura (Andi Matichak), the answer is pretty dam far. Rarely in horror do we get a film that has an equal mixture of heart and scares, a film that really hits deeps. Whether or not Ivan Kavangh’s (The Canal, Never Grow Old) newest Shudder Exclusive Son entertains you as a film, you cannot deny that it is full of heart and scares. Now, this is not coming from a place of being devoid of new horror a la pandemic issues, but Son is singularly one of the greatest horror films of 2021 and sets an extremely high bar for the decade. It left me shaking and teary-eyed. From its insanely chaotic opening sequence to the heart aching final moments, Son is a wild intense thrill ride.

When a young boy contracts a mysterious illness, his mother must decide how far she will go to protect him from terrifying forces in her past.

We start with a frenzied point of view shot in a car with a cacophony of sounds, which really sets the mood for what we are about to witness. The film ramps up to level 10 right away and does not let you go. After arriving at a diner, we’re given a tidbit of background information regarding what Laura is doing/where she is coming from, and it is the perfect amount to set up her future endeavors without beating you over the head with needless exposition.

Kavanagh’s direction is tight and on point and perfectly complemented by Piers McGrail’s (The Canal, Let Us Prey, and one of my favorite short films Catcalls) cinematography. One of the brilliant aspects of Son is their ability to jump around different subgenres and still feel like a cohesive piece of film: from home invasion to body horror to the supernatural and so many more. Besides being full of substance, stylistically, this film is a major success. While the film does dip its toes in other subgenres, it stylistically feels like a ’70s satanic panic film and a mumblegore film cucked an elevated horror film and this was the result. It takes the best things from each one of those styles and really makes them its own.

The three lead actors all stand out in their own ways and shine throughout this dismal series of unfortunate events. Emile Hirsch (Once Upon a Time…in Hollywood, The Autopsy of Jane Doe) as Paul gives a very good yet restrained performance and is charming as hell. Luke David Blumm (The King of Staten Island, The Sinner) as David gives a seriously great and compelling performance, especially for a child actor. It seems that horror has been tending to rely on child actors more and more lately, and sometimes that is not always the best thing (looking at you Babadook boy). But there is no doubt that Andi Matichak (Halloween, Assimilate) as Laura acts her ass off and gives one of horror’s best performances. I was incredibly astounded by her range and just how believable and real she made everything feel. 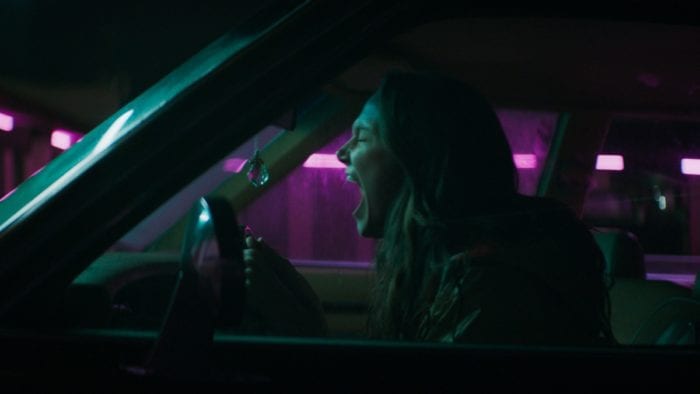 There is a great little back and forth between Laura and David towards the beginning of the film where the inquisitive David asks, “If you had eight arms what would you do with them?” with Laura pensively responding, “I’d show them off and call myself a spider lady.” Laura’s response is quite deep here as she realizes that to overcome her past traumas, she must confront them head-on. This seemingly innocuous moment is an example of one of the many fantastic moments of acting from Laura and David, but it also shows how concise and direct Kavanagh’s screenwriting abilities are. 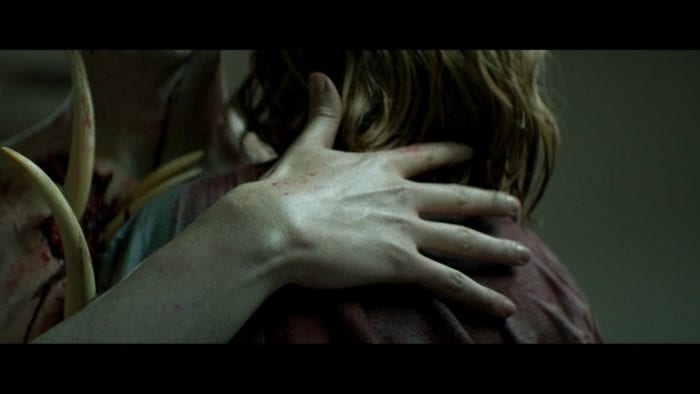 As briefly stated earlier, this film is a beautiful tale of how far a mother with a mysterious past would go to protect her child. There is a deep psychological element to the film, and it still manages to deliver on blood and scares; it is perfectly balanced. Fans of gory films and fans of psychological films will both be delighted and overwhelmed with the places that Kavanagh takes us to. As Alfred Hitchcock once said, “there is no terror in the bang, only in the anticipation of it.” Rest assured, Son will make you terrified of the anticipation and the bang.

Son will be premiering on Shudder on July 8th, and trust me…you do not want to miss it.