Genre fans are always holding out for the next great slasher film. Since Scream revitalized the stalk-and-slash craze from the 1980s (and The Cabin in the Woods was a celebratory love letter to the horror genre as a whole), we are due for another. Initiation (or Init!ation) probably isn’t going to be a post-post-modern mainstay, but it is at least more concerned with making a statement on social issues through an up-to-the-minute #MeToo lens than just dishing out kills to an attractive cast. In some respects, it has more in common with Sophia Takal’s 2019 reimagining of Black Christmas, which took big swings to address campus rape culture but ultimately fell into bold, underlined, and italicized heavy-handedness. Unlike that film, Initiation more realistically deals with its sober subject matter and seems less afraid of being a slasher whodunit.

Initiation begins amusingly, the camera creeping down a hallway toward a closed door as a young woman’s screams get louder. When the door flies open, it’s just a sorority pledge playfully screaming and laughing as her “big” chases after her with a water gun. It’s Rush Week at Whiton University, where fraternity Sigma Nu Pi is hosting a homecoming party with sorority Kappa Nu. Neon debauchery ensues with “pink drink” pong and joints being passed. In a chapter room, reprehensible Sigma Nu Pi president Beau (Gattlin Griffith) explains to all of his pledges about their traditional initiation of picking a sorority chick, sleeping with her, and then tagging her on social media with an exclamation point. One of the brothers, Wes (Froy Gutierrez), dismisses this tradition aloud. Afterward, Wes and his actual sister, Ellery (Lindsay LaVanchy), the president of Kappa Nu, pass a joint while scrolling through social media. As the night comes to a close, Ellery looks for her “little,” Kylie (Isabella Gomez), to get her home. She finds her upstairs in a bedroom, passed out on a bed. Next to Kylie on the mattress is Wes, and the whole situation seems to be grossly controlled by Beau. It’s not until the morning that Ellery sees Kylie tagged in a photo and Wes having commented with an “!.”

As the film presses on from there, it becomes a guessing game of what actually happened last night to Kylie, and is Wes involved? When Kylie comes to Ellery’s roommate, Shayleen (Shireen Lai), and suspects she was assaulted, Ellery isn’t sure how to handle the situation, especially if her brother is directly involved. Wes is after all a “promising young man” and “a shining example of the university’s core values”—a star swimmer with a bright future and under a lot of pressure, particularly by his coach (Bart Johnson). As days go by, Wes is brutally murdered by a masked killer who’s handy with a hammer and a power drill. Is this killer done?

Writer-director John Berardo (debuting with his directorial feature) and co-writers Brian Frager and Lindsay LaVanchy set up their intentions pretty quickly. Date-rape politics is the main through-line here, with sexual assault accusations and the university doing everything it can to bury them. Running parallel to this main narrative is, of course, that masked killer with a clear vendetta. Red herrings abound. Could it be Beau, or Beau’s menacing father, or Wes’s verbally abusive coach, or Tyler (Maxwell Hamilton), a creepy but most likely harmless co-worker who pines after Ellery? The killer can’t be any of these characters, of course, or it would be too obvious. Unfortunately, it is telegraphed pretty quickly who’s taking out everyone complicit in Kylie’s sexual assault.

Though nothing can compare to the hide-and-seek set-piece in Scream 2 in the college visual arts building, director Berardo does stage a suspenseful climactic chase at Whiton’s student affairs center. It’s also the first time the viewer is able to actually care about the safety of its characters. Before that, Berardo does deliver some basic “pick ‘em off” entertainment, even if those getting what they allegedly deserve are not easy to care about anyway. A kill scene in a blindingly white bathroom that quickly gets stained red is suitably nasty, as is another in which a key character is slain during a little self-pleasure session. For a change, Berardo brings a little male nudity. One of the main staples of ‘80s slasher pics has always been the gratuitous nudity of nubile women dropping their towels and taking off their tops before being slaughtered. So, why not reverse the gender?

Berardo also uses text messages on-screen in a way that’s not distracting or gimmicky but germane to the narrative and to how these young characters communicate. Little flourishes, like a photo of Ellery and her mother, efficiently establish Ellery’s instincts to be a big sister to not only Wes but also to her sisters.

Lindsay LaVanchy, who also co-wrote the script, is quite good with an accessible presence and dramatic chops as Ellery. LaVanchy is particularly affecting when the police arrive at the lab, where she works late nights, to tell her the news of Wes’ death. There’s emotional truth in her delivery, too, when she confesses to Kylie something about her brother’s past. Ellery, herself, is a refreshingly proactive lead, too. When she needs to know the truth, she does her own DNA test on Kylie’s shorts, the ones she wore the night of the party. Aside from LaVanchy, the young cast is a competent lot. The most familiar faces, though, are Lochlyn Munro, as the university’s chancellor Bruce Van Horn, and Yancy Butler, as Detective Sandra Fitzgerald.

Aspiring to be this current generation’s Scream, Initiation doesn’t have the finesse or the personality to be that. But for a slasher film with something on its mind other than a body count, it will do.

Saban Films is releasing Initiation in theaters, On Demand, and digital on May 7, 2021. 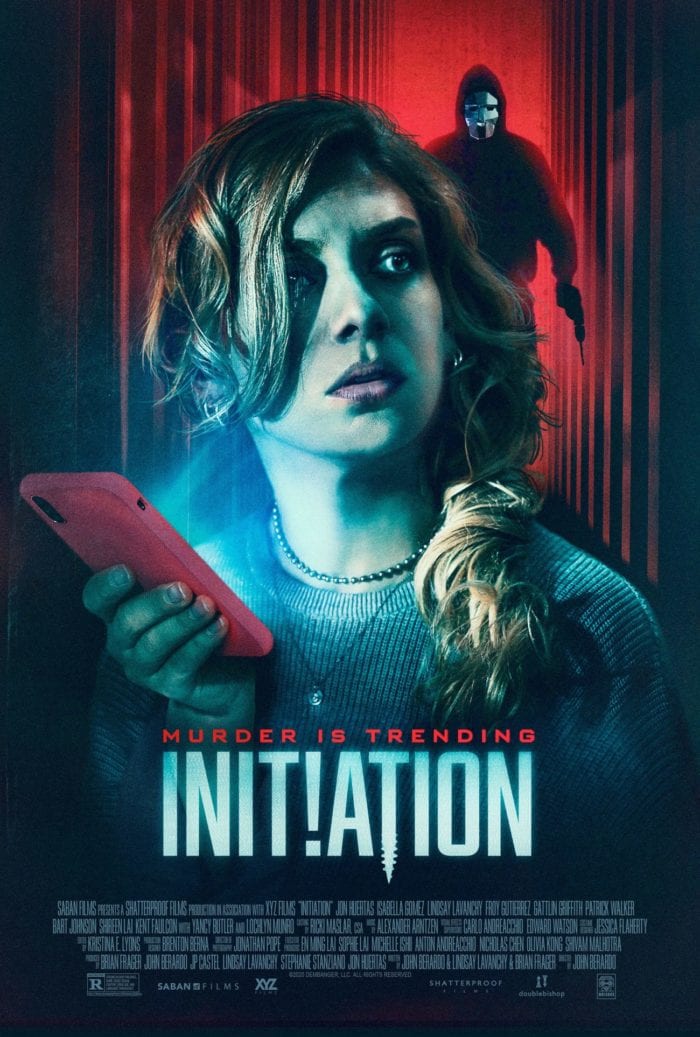 Looking for more new horror releases? We’ve got you:

“Leave Tropes and Tradition Behind With the Boys From County Hell”

“The Block Island Sound Reminds Us That Less Is More”

“The Banishing: Here Be Houses and Haunts”

“Paradise Cove Buries Its Head in the Sand”

“The Funeral Home Undermines Its Creepy Atmosphere With Poor Characters, Scares, and Story”

“The Last of Us Part II Is Brutal and Beautiful”

“World of Horror: Day One Review”

“A White Knuckle Ride Through the Black Woods”