Little Nightmares II is the highly anticipated sequel to 2017’s Little Nightmares by Swedish developer Tarsier Studios, published by Bandai Namco Entertainment. You take control of Mono, a mysterious child wearing a paper bag for a hat. Soon they meet up with the protagonist of the first game, Six, another child, wearing a yellow raincoat. Together you journey across this strange world, evading enormous and terrifying adults and solving puzzles to progress. I played the Nintendo Switch Version, but it is also available on Steam, Google Stadia, Playstation 4, and Xbox One. (versions for PlayStation 5 and Xbox Series X/S are to be released at a later date). 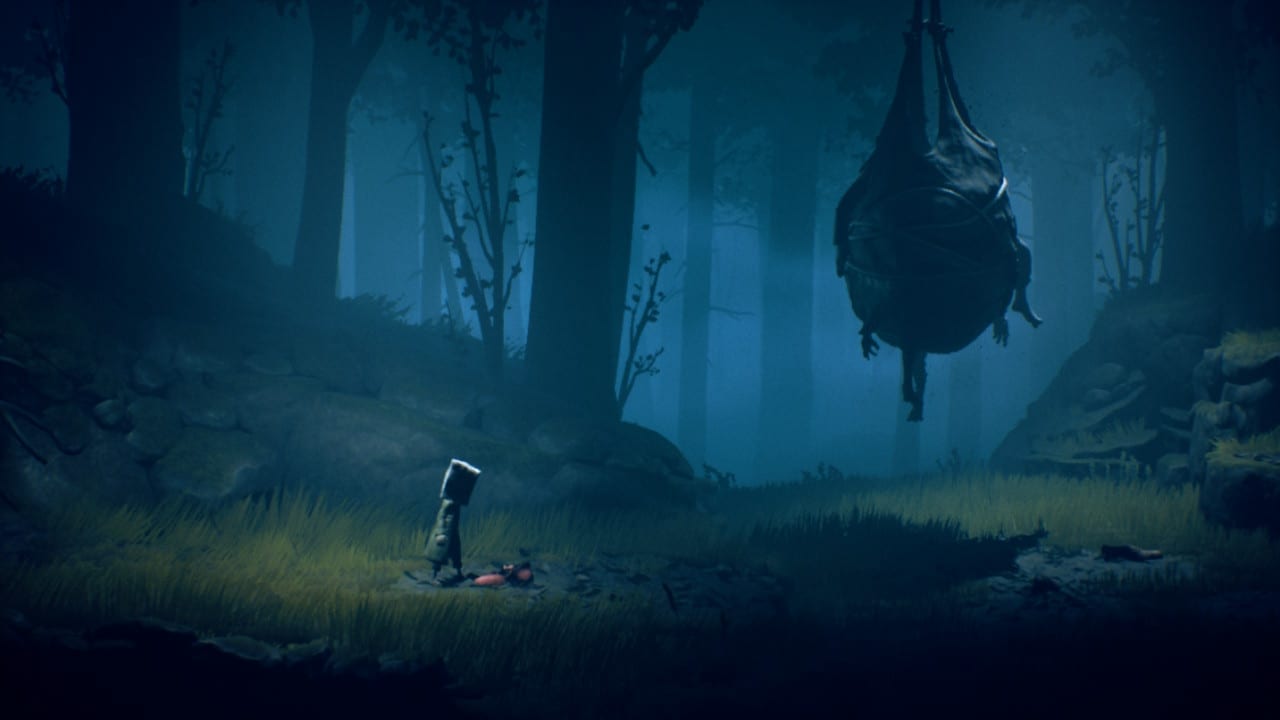 While the first Little Nightmares takes place entirely on a giant cruise ship, the sequel is more open, starting in the woods and traveling to a seemingly abandoned city. The variety of environments is great, and the length of each area never felt too long or too short. The general color palette is soft blues and browns, with splashes of bright highlights here and there and it works very well to set the mood.

The controls are the same as the first game: jumping, climbing, and grabbing objects. A new mechanic is using a weapon in several sections of the game, a long stick or pipe in a slow overhead swing. Mono is a child, after all, so they are not the most fearsome warrior. I don’t generally mind when games do this since combat usually isn’t the main focus and isn’t overused.

With Six acting as a follower NPC, the two of you work together to complete tasks. Six’s AI works well and she places herself where she needs to be—under a ledge to give you a hand up, carrying objects so you can keep your hands free, and hiding when enemies appear. It’s not an escort mission and you never have to worry about Six falling behind or getting in the way and it’s greatly appreciated.

While Mono starts the game with a paper bag hat (and a Mokujin Mask if you pre-ordered, a reference to the character from Tekken), you can collect new hats throughout the game. These are all purely cosmetic and optional but I always appreciate when games have things like this. Of course, I put on each new hat as I come across it! I want to look cool! I know for sure I missed some along the way and that gives me a reason to replay it while enjoying the beautiful and haunting scenery more.

One of my only complaints, when I played the first, was how much it took from the Studio Ghibli film Spirited Away. This is spoilers territory, but there are some scenes that directly reference and follow the plot of the film, with adults eating small children, and even chasing you frothing at the mouth. It’s tense and the people engorging on what can only be assumed to be other children is horrible, but not original.

The second, while still taking notes from various mythologies and tropes, feels far more original in concept. Highlights of the experience are what I like to call “spooky dioramas,” which are rooms featuring something totally freaky going on that make you pause. The Silent Hill series is the king of these. I admit I’m not scared often by these games, but I had a few moments where I just went “oh my god” because I knew something terrible was going to happen. Were these horrible giants going to rush at me? More often the case was no, but because there were a few times where it did happen, I was always on edge, expecting the worst. Subverting expectation is an overused phrase in horror, but when it’s done well, it’s amazing. 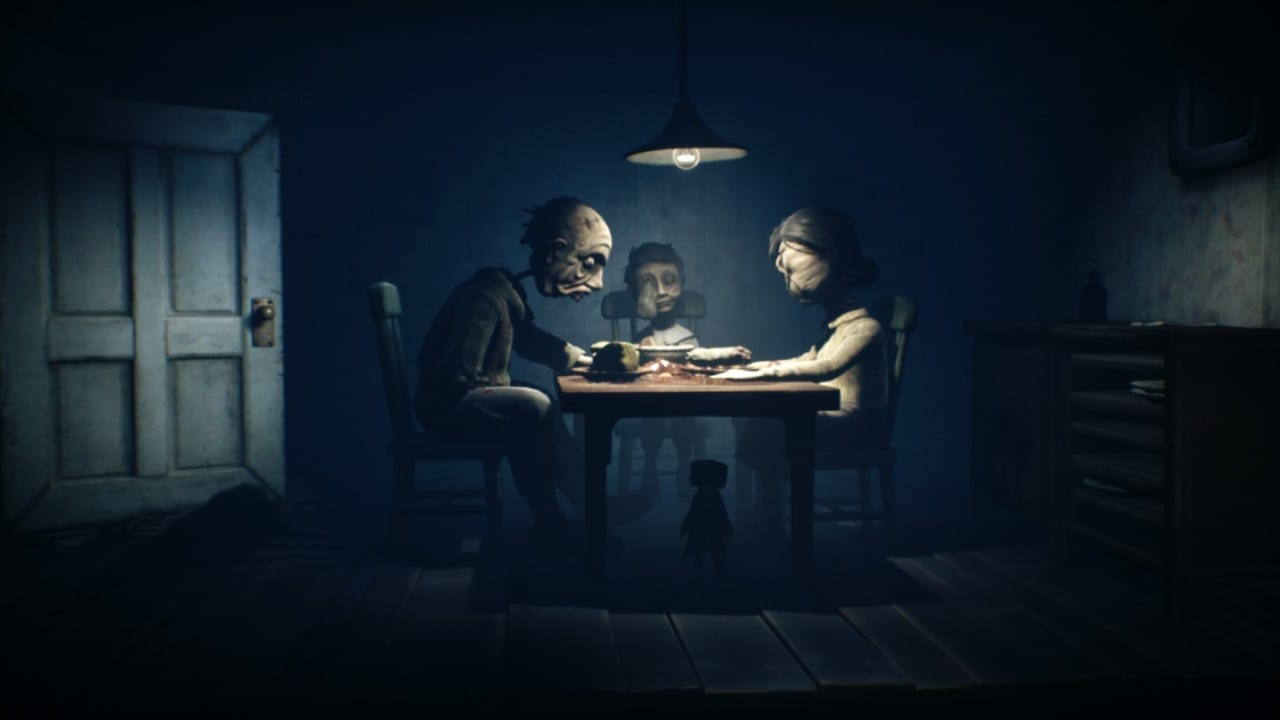 The game (same as the first) uses a series of checkpoints, so when you fail, or in my case, fall to your untimely death a bunch, you respawn basically right where you left off or very close to it. Loading only happens when you enter a new area and are very fast. I had a few hitches during chase scenes but nothing too over the top. Sometimes Mono’s coat would get stuck and flail around, as well.

The game really shines in a section of the game I’m going to spoil a little, the hospital. While a lot of horror uses the damaging trope of mental illness and asylums, Little Nightmares II takes it in a totally different and frightful direction. Medical prosthetics in various arrangements litter the hallways. Statues freeze when light is directed at them, but move blazing-fast with unnatural movement when in darkness. Running to a switch, I barely turned in time to cast my flashlight on one and felt my heart rate go up! I haven’t mentioned it thus far but music in the game is very limited, instead focusing on sound effects. A jittery noise off-screen will have you running for cover and dreading pointing your flashpoint to see what came behind you. 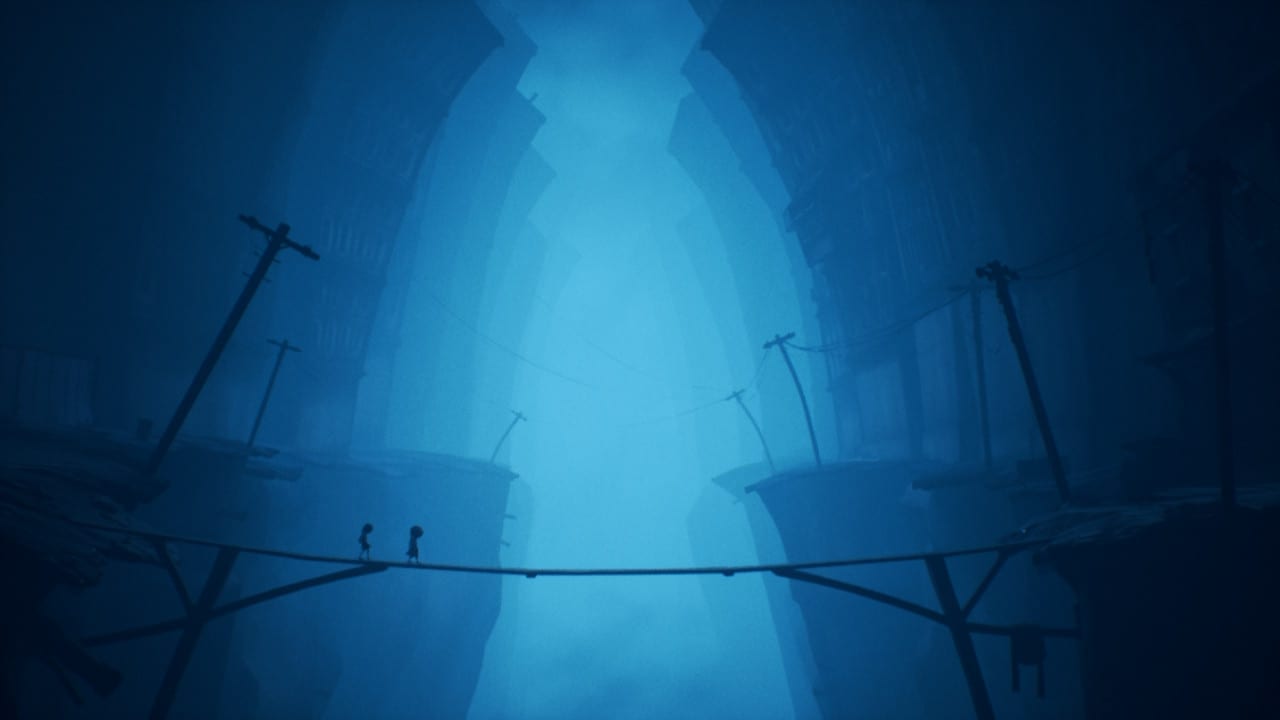 A full playthrough will take you about 6-8 hours which is fine by me for a game of this kind. The ending did drag a bit, but I know my timing is not the greatest so I know many people will beat it in less time. Also, for fans of the first game, it connects in a surprising way. I know this isn’t the end of this series and these characters, and I cannot wait to see what comes next.