This biography pops. I’ll give you three reasons to get a copy and crack it open as soon as you can. Then, we’ll visit some of the book’s most intriguing avenues.

First, the author, Sandra Niemi, brings rich texture to the life of her aunt Maila Nurmi and the iconic figure of Vampira that Nurmi created. Readers already familiar with Vampira get expansive access to the life of the amazing woman who created the character. Readers who know little or nothing about Vampira also will find the book a welcomingly accessible introduction. Niemi provides Maila Nurmi’s personal perspectives on the origins, evolution, and hauntings of Vampira in her life. On a social scale, Niemi situates the disruptive force of Vampira in the 1950s American television landscape. The book draws readers out of our present moment as well as horror culture as it has existed since the 1970s to imagine the impact of this witty goth flickering onto home TV screens at a time when I Love Lucy, The Jackie Gleason Show, and Dragnet were the top-rated programs in the nation. 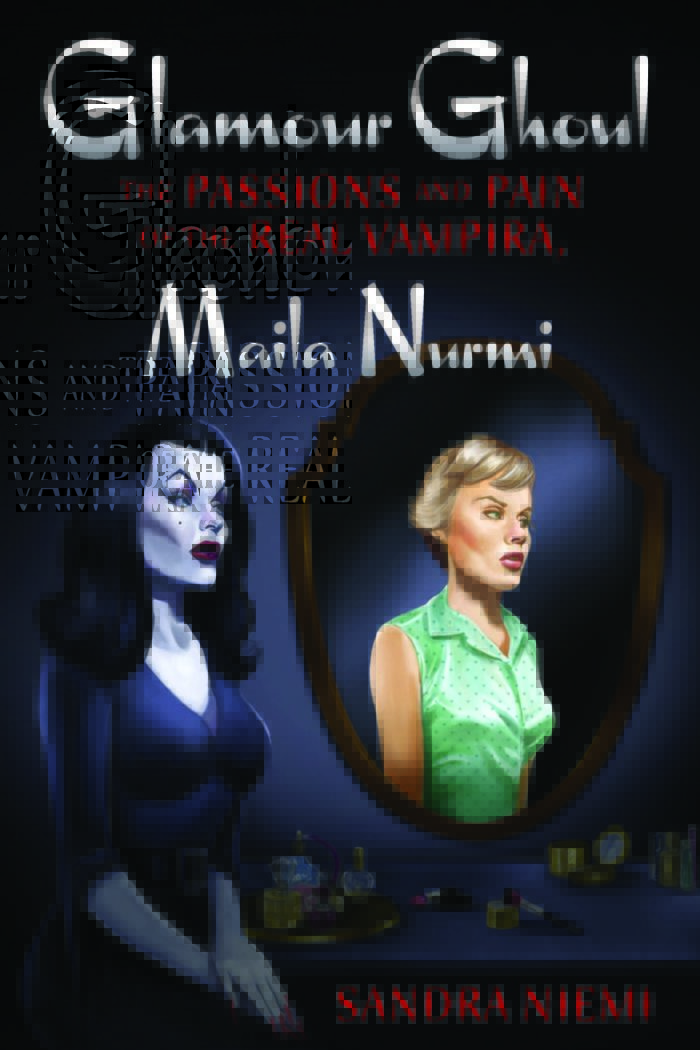 Second, the book delivers thrilling accounts of Maila Nurmi’s relationships with ascending cultural stars and her experiences of life in Hollywood hotspots in one of Tinseltown’s most fabled ages. Nurmi’s most intense relationships include James Dean, Orson Welles, Marlon Brando, Elvis Presley, and Sir Anthony Hopkins among others. She shaped and was shaped by these fellow culture creators, and the book includes many direct quotes from Nurmi’s journals about these loves, losses, and friendships. The chief Hollywood hotspot is Googies, an alternative joint that popped up next door to Schwab’s Pharmacy on Sunset Boulevard. Schwab’s and Googies appear in metafilms about California filmland, and Nurmi’s accounts give readers an extended feel of what it was like to hang out over coffee with friends through the late-night hours there—and sharing a table with the very young James Dean, no less. If you’re intrigued by, or like me kind of obsessed with, 1950s Hollywood this book is a jackpot.

Third, as the title suggests, Glamour Ghoul explores the lived experience of a woman in the entertainment industry. From our own #MeToo point of view, this biography documents the perils and practices that have oppressed women in the industry for decades. Unique to the book is the way Nurmi’s Vampira character/persona frames her experiences in terms of bringing the macabre and the horror genre into the mainstream at a time when dominant portrayals of families and values looked like the Cleavers on Leave it to Beaver. Between Niemi’s approach and the many first-hand journal excerpts, Glamour Ghoul cultivates readerly care and empathy for Nurmi while keeping a sense of objectivity.

To say Maila Nurmi’s Vampira is iconic underscores the electric force of the visual image. Niemi’s biography takes readers on a thorough tour of how the clothing, hair, makeup—the whole persona—came to be. From early in Nurmi’s life, she practiced a kind of DIY art life. The book shares anecdotes of her learning to make clothing, first by reproducing designs she saw in shops and later as an original designer. The importance that her design skills and vision played in younger years helps readers comprehend both the startling genius of Vampira as her invention and the energy Nurmi brought to trying to protect her creation. What’s more, the writing transports us right into the room while Nurmi made Vampira’s dress and, of course, those fingernails. The tale of Vampira in the entertainment industry is one of intellectual property, yet this biography expands the scope of the tale to something deeply personal. You may find yourself simultaneously blown away by Nurmi’s creativity and emotionally invested in how this part of her lived identity created some devastating challenges for her as it became a propertied commodity.

The accounts of Nurmi’s relationships with famous stars of the era are revelatory and provocative. Many of these really demand a spoiler-free review, and I’m glad to preserve the shocks and surprises. That said, I found the events and feelings connected with James Dean absolutely magnetic. Dean’s untimely death is fairly-known to folks over forty, and his fascination with death is well documented in his biographies, but the first- and second-hand scenarios in Glamour Ghoul flesh out this aspect of Dean’s private personality, plus they attest to the formative influence Nurmi had in their dynamic friendship.

Perhaps the most memorable example is the description of Maila Nurmi’s and James Dean’s last meal together. The episode has a cinematic quality, from hopping on a motorcycle to a goofy grocery store run and a nighttime picnic in a key spot of Hollywood geography. The way Niemi presents this night nudges readers to empathize with these two people’s lives somewhat at the margins of the industry lifestyle and as conflations of their identities on camera and off. This whole episode can really touch your heart in a goth register.

With an eye toward the horror genre and the macabre, Glamour Ghoul conjures the cultural context effectively so readers can robustly appreciate how stunning Vampira must have been as she beamed into homes via TV screens. The films that occupied most of the programs’ run times tended toward the schlocky. What resonated then and echoes still today is Vampira’s segments at the opening, closing, and transitions in the programs. Niemi includes witty one-liners that were used and some that were in the drafting docs discovered in Nurmi’s belongings. Noteworthy is the presentation of Vampira’s innuendo and the improbable fact of her frequent slipping it past broadcast professionals in a time of softly but surely policed conformism.

Though the book doesn’t make this specific argument, the evidence in its pages demonstrates a key role Nurmi as Vampira played in a broader cultural population in recognizing horror as legitimate and as an open space to explore the tensions and contradictions of any given lived era. We also get direct and indirect access to the chronology and conversations between Nurmi and Ed Wood about her participation in Plan 9 from Outer Space—a film that lives on in diverse ways, from the Johnny Depp biopic of Wood and the Rifftrax rendition of the original to continued interest in Plan 9 from Outer Space itself as both an exemplar of dubious filmmaking and a time capsule of Vampira and Bela Lugosi.

On a final note, Glamour Ghoul accomplishes all these feats while putting readers right alongside Maila Nurmi along the full span of her life. The biography tarries with the tough times, and some of these times were devastatingly tough and for terribly long periods. Nurmi’s sunset years had ups and downs, and it was in these years that Niemi last met in person with her aunt. Simply put, the book magically manages to capture the entwined lives of Maila Nurmi and her Vampira—the passions and pain, as the subtitle aptly puts it, of living and performing, of breaking free from many conventions and then charting out the unknown territories like a heroine stepping through a doorway without knowing where it leads.