I have no idea how many times I have watched Scream, but in earnest, it has to be close to 100. In fact, anyone that has been my friend long enough will probably wonder why it took me so long to write this article. I have watched it so often that I thought about writing this without a re-watch, but recent life events have taught me that going from memory alone might not give me the most precise picture.

Scream came around during a part of my life that I romanticize heavily. A time when I conveniently left out all of the facts and only focused on the times I was with friends, young, and without responsibility. So, anything from my memory, in this case, is likely to be exaggerated.

To be fair, I still watch it every year on my birthday except for this year, due to the entire world being on fire. Usually, a few childhood friends would stay up late with me—way past my birthday party, pushing 2 a.m., and watch Scream with me until we all fall asleep. My 36th birthday has been the only missed year so far. I am a very mature grown-up.

Either way, I am now sitting here watching Casey, played by Drew Barrymore, cry into her giant cordless phone. I promised that this article wouldn’t just be a love letter to my favorite horror film, so I should probably dig in with some analysis. For me, Scream was always the most interesting horror film for how it looks at itself as it’s playing out. 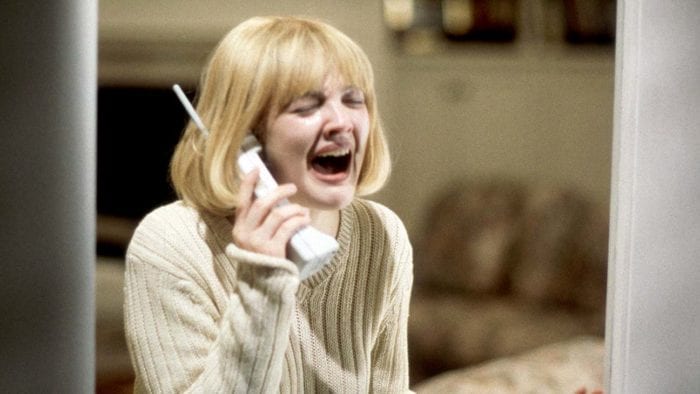 For instance, in zombie movies, no one ever acknowledges the existence of zombie movies (or at least they had not back in 1996). The characters live in a world, a somber sounding world, where no zombie movies have ever been made. The same can be said for vampires, werewolves, and any number of mystical creatures. Scream exists in a world where all of our real-life horror movies are not only a thing, but they play a significant role in shaping the entire film.

We see this a lot with the character Randy, played by Jamie Kennedy, who is the resident film expert and works at a video store. You know, that place where you could go and rent a VHS tape, based solely on the description on the case since the internet wasn’t really a big thing and YouTube wasn’t available to inform your movie-making decisions. Randy is hyperaware of the tried and true horror tropes and uses this knowledge to push the movie forward, despite being completely ignored by his peers.

Scream lets you know that it knows it’s a horror film, and that is one of my favorite things about the movie. Back in 1996, this was a novel and refreshing idea—the kids in the film were just like us. Randy had watched all of my favorite movies. Sidney, played by Neve Campbell, shares her frustrations about hysterical women running up the stairs, a thing I have screamed at my TV over. Billy, played by Skeet Ulrich, and Stuart, played by Mathew Lillard, had both watched, perhaps, one too many scary movies. All of these characters are the audience. I mean, hopefully without the murdering part but, you know, maybe.

The frequent discussions of horror films helps pull you into Scream, so it is a more involved experience. It is almost as though you are part of the film, and it allows you to become more invested in the characters’ lives. Also, if you were on the young end of your teenage years in 1996, you know that prank calls were all the rage, and a lot of us didn’t even have caller ID yet. The idea of a killer invading your home via prank phone call felt completely possible. We didn’t always prank call strangers, a lot of the times we would call and mess with our friends. I swear it was a form of endearment.

There are many scenes in Scream that stick out to me, scenes that make the movie meta, as the kids would say. When Randy is at work (remember the VHS rental situation) having a conversation with Stu, he goes into various scenarios for who the killer could be. He talks about specific horror films, what happened in those films, as well as touching on some rules of horror. This interaction, of course, leads to him screaming that everyone is a suspect, and in the case of Scream, everyone really was a suspect. The same conversation led to the comment that motives were incidental because it’s the millennium.

Every step of the film is a breadcrumb for the final act and a set-up for a new possible suspect, and as the film goes on, you get a very brief overview of horror 101. Scream tells you what happens in horror films as it’s happening, which was completely uncharted territory, while still having very familiar storylines in the background. Yes, there is a psycho-murderer on the loose, but we also learn that Sidney lost her mother and possibly sent the wrong man to jail. Well, according to Gale Weathers, played by Courtney Cox.

Sidney is obviously the final girl long before the movie is over, so we learn way more about her character than any of the others. She has a lot of trauma and seems to easily believe that any single human close to her could be the killer when presented with any amount of evidence. She also dares to question the killer when he calls and she mocks him when she doesn’t believe he is watching her, as he claims. 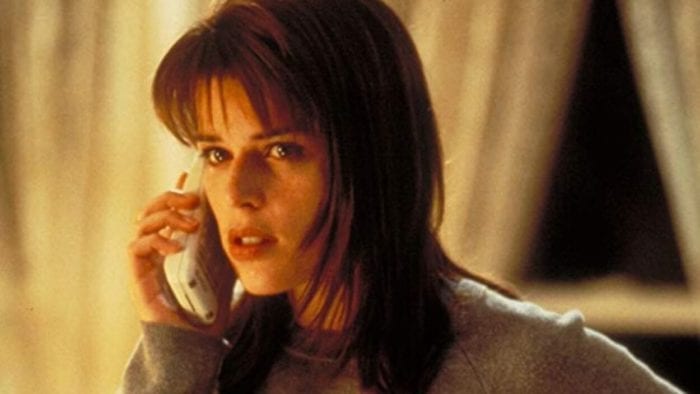 My favorite part of her first phone call from the killer is the statement she makes about a “stupid killer chasing a big breasted girl who can’t act, who’s always running up the stairs when she should be going out the front door. It’s insulting.” First of all, Sidney is not wrong, but secondly, she quickly finds herself in a situation where running up the stairs is her only choice. It is lines and scenes like this that make the film, well, Scream.

Sidney is written as one of the more suspicious and aware final girls, and while I maybe didn’t appreciate that effort when I was 13, it certainly stands out to me now. In his own way, Randy is a final guy, and he also happens to be overly aware, yet far less suspicious than Sidney. Without these two characters, Scream wouldn’t have worked; we need Sidney’s backstory and trauma as well as Randy’s vast horror knowledge and humor. I don’t want to forget Dewey here, played by David Arquette, his character provided consistent and much needed comic relief.

Deputy Dewey had many memorable scenes, including getting called out by his little sister Tatum, played by Rose McGowan, in front of his fellow officers. He resorts to reminding her that “mom” said she has to call him Deputy when he is at work. Dewey is far from inept; he simply lacks the confidence to have a strong presence and possibly is just a really good guy that has a hard time asserting himself.

Stu is probably one of my favorite characters even long after discovering that he is a complete sociopath. Mathew Lillard played this role so well, and his lines at the very end are hilarious. The idea that his parents are going to be super mad at him for being a serial killer, as well as that being his main concern in the entire mess, still makes me laugh. 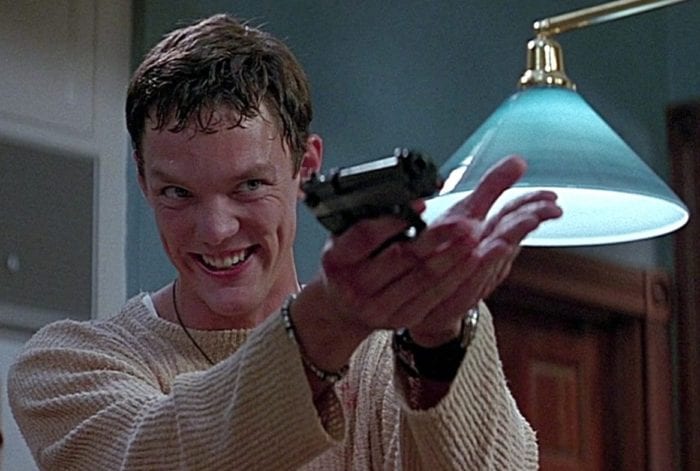 To be honest, I think continued humor weaved throughout was also an essential component of the film that helped make it successful. Scream is not here to take itself too seriously, yet still managed to scare you. Probably. I don’t personally remember being scared by it, but I have younger friends that are terrified of Ghostface, a character that launched a million Halloween costumes. Oh, and by the way, Ghostface is never the same person, not throughout the entire franchise, which adds to the mythos of Scream’s universe.

I think that Wes Craven made an important impact with this film, the same way as A Nightmare on Elm St., with an entirely new generation of teenagers to horrify. Unlike his previous films, Scream was packed to the brim with well-known actors and, in my opinion, had a very likable soundtrack. There were so many elements of Scream and its entire franchise that reached out and pulled you in, including the music you could buy…and play on repeat at every sleepover until one of your friends finally snapped. Just kidding, all of my friends were very tolerant of my insane obsession with all things Scream (Laura, you were an actual saint), and did their best to share in it.

In the final act, we see a run of the mill high school house party, again very relatable, that ties everything together. Here we have Randy giving literal rules of horror, famously, the danger of saying, “I’ll be right back.” We lose main characters who have somehow made it to the final act, which now that I think about it is not usually the case, and the killers are revealed. Sidney again embodies all of the traits needed for a final girl, with Randy by her side. Thanks to Randy, Sidney and the audience are made aware that the killer always comes back for “one last scare,” allowing Sid to put a final bullet in Billy’s head.

Scream has been said to break a lot of rules; I actually think that it revealed the rules and then bent them. We still have the tropes, we are just informed in Scream that they are, in fact, tropes, and then they take place. The film takes every opportunity to call back to old school horror films, from verbal callbacks to scene set-ups, and meshes it beautifully. I still find new things when I watch the movie, and as I have gone back and watched more classic horror, I now can put the references together. Clearly, I love this film and am likely biased, but I have a hard time ignoring all of the things it did well and all of the ways it impacted the genre.

There are currently four films in the Scream franchise, with a fifth in the making. The movie also spawned a series by the same name on MTV and inspired the satire franchise of Scary Movie. There are soundtracks available for each film and an endless supply of Scream merch to make your little horror heart happy. Keep an eye out for Scream sequels coverage, because we have a lot more to discuss.