Indie distributor A24 brings us a first look at an upcoming murder mystery whodunit that has everyone at Horror Obsessive captivatingly onboard when Amanda Sternberg asks in a slightly devious manner, “Who wants to play Bodies Bodies Bodies?”

If you watched last year’s laugh-out-loud funny Werewolves Within, then you have a vague idea of what to expect from Bodies Bodies Bodies. The template for both films are slightly alike, this time seeing a group of twenty-somethings throwing a “hurricane party” at a mansion to Werewolves Within’s winter storm forcing a handful of townsfolk into an empty hotel. Both films stem from a game that depends on how well you know the people around you. 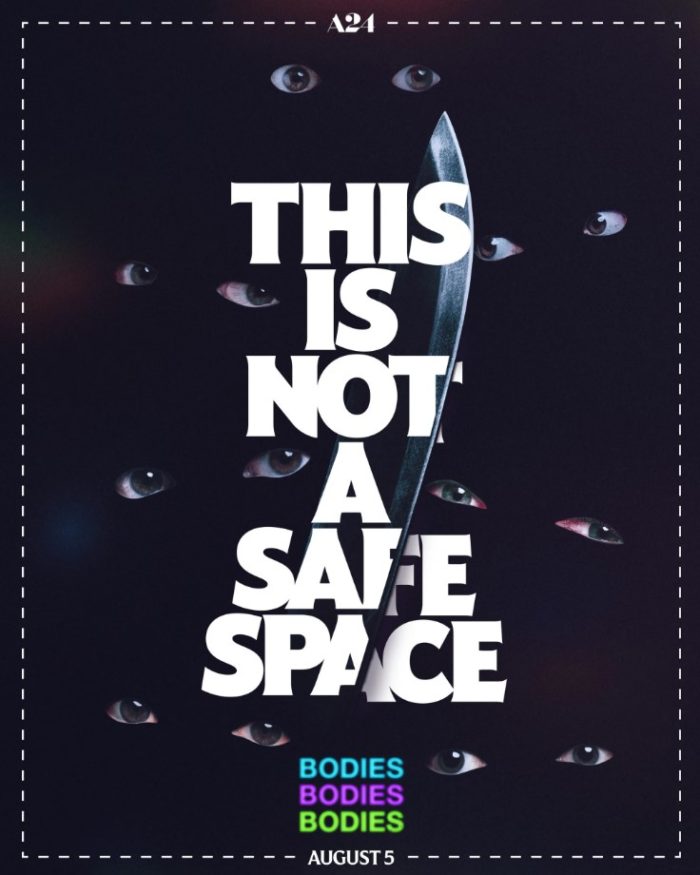 Bodies Bodies Bodies (aka Body Body, Mafia, Werewolves Within, Among Us) is a party game where a large group of friends draws playing cards to determine who is going to be the game’s killer. Once a killer is in place, the group goes about their party until the killer reveals themself to a victim using a predetermined gesture, like hands placed around a player’s neck. This signifies the death of the player. When another player comes across the body, they call the other players into the room to vote on who they think the killer is.

Someone in the trailer is clearly taking the game to another level. Where Bodies Bodies Bodies will have to keep it fresh is through its satirical lens aimed at millennial culture. Noted by the new “This Is Not a Safe Space” poster that accompanied the trailer release this week, expect frenemy retaliations, literal backstabbing, and flagrant projecting of pop-culture descriptors like toxic, gaslighting, and silencing, undercutting the group’s dire situation. The more emotionally untethered they become in their scenario, the more apt they are to react violently, making for chaotic guesses about who the killer may be as the movie winds to a close.

Headed by Stenberg (The Hate U Give, Dear Evan Hansen) and featuring a hip young cast of up-and-comers such as Borat Subsequent Moviefilm’s Maria Bakalova, Shiva Baby’s Rachel Sennott, On the Rocks’ Chase Sui Wonders, and Myha’la Herrold from HBO’s Industry. The film is further capped off with appearances by The Suicide Squad’s Pete Davidson and Guardians of the Galaxy’s Lee Pace.