What’s the best Halloween-themed movie ever made? A lot of people would probably say John Carpenter’s Halloween, but I disagree. Sure, it’s one of the best horror films of all time, and it takes place on October 31, but it’s not actually about Halloween. The story would’ve been exactly the same if it had been set on any other night, so while it definitely deserves to be on everybody’s October watchlist, I wouldn’t exactly call it Halloween-themed. Instead, my pick would be the 2007 anthology gem Trick ‘r Treat.

Not only does this movie take place on October 31, but it’s actually about Halloween as well. It’s all about people celebrating the holiday in various ways, so it couldn’t have been set on any other day. On top of that, Trick ‘r Treat also does something really cool that sets it apart from all of its horrific peers: it’s a cinematic celebration of Halloween the likes of which we’ve never seen before.

You can feel the love for the holiday dripping from every frame, so if you’re a Halloween aficionado, you’re pretty much guaranteed to enjoy this film. Most obviously, it’s saturated with colorful costumes, jack-o’-lanterns, and trick or treaters, so it just about smacks you over the head with its Halloween imagery. A bit more subtly (but also more importantly), Trick ‘r Treat also honors the holiday in a way that only a horror movie can, and to see how it does this, we have to carefully examine the movie’s most important theme.

When you first see this odd little opening, you don’t really think much of it. It seems like just a stylized intro to get you into the Halloween spirit, but it actually does a lot more than that. It tells you exactly what the movie is about. See, in a certain sense, Trick ‘r Treat is a lot like a typical 1980s slasher film. As Scream taught us, there are certain rules you have to follow to survive a slasher, and the same is true here. To survive this movie, the characters have to honor a set of hallowed October 31 traditions, and everyone who breaks them dies in horrific ways.

Granted, these traditions are very different from the guidelines laid out in the opening PSA, but the spirit is very much the same. Trick ‘r Treat is all about what you have to do to stay safe on Halloween, and the movie doesn’t waste any time hammering the point home. In the very first segment, one of the characters wants to blow out a jack-o-lantern, but her husband warns her not to do it until after midnight. He says it’s an “ancient tradition,” but she’s not convinced. She disregards his warning and blows the candle out anyway, and unluckily for her, the Halloween demon Sam is watching her every move.

He soon murders her in a brutal fashion, so if there’s any doubt about how important these ancient Halloween traditions are, it should be put to rest immediately. This movie means business, and if the characters want to make it to November 1 in one piece, they have to obey the rules, just like the opening PSA said.

Throughout the rest of Trick ‘r Treat, we see this same principle play out multiple times, but it’s never quite as straightforward as it was in that opening segment. Rather, the film mixes up its formula a little bit every time, so you never know exactly what to expect.

To take just one example, there’s a segment about a group of kids who meet up with a local loner named Rhonda, and they take her to an abandoned quarry where some intellectually disabled children were tragically killed a few decades earlier. Initially, Rhonda thinks they’re being nice, but it’s all just a setup for a cruel prank. First, the kids tell her the story of the tragedy and light a bunch of jack-o’-lanterns to commemorate the children, and then all but one of them go off and leave Rhonda in the quarry elevator.

Next, Rhonda and the kid who stayed with her hear something strange, and Rhonda decides to investigate. She thinks it might be supernatural, so before she goes out to find the source of the noise, she leaves the kid a lit jack-o-lantern and says it’ll protect him. Soon afterward, she runs into the rest of the group, but they’re dressed as ghosts. They scare the absolute bejeezus out of her, and on their way back to the elevator, they come across one of their jack-o’-lanterns. Apparently, they don’t believe in the power of jack-o’-lanterns like Rhonda does, so the leader of the group nonchalantly kicks it into some water and extinguishes the candle inside it.

Almost immediately, the real dead children rise from their graves, and they go on the attack, chasing the kids all the way back to the elevator. Rhonda gets there ahead of the others, and when she steps in, she finds that the jack-o’-lantern she left is still lit. She closes the gate, and when the other kids beg her to let them in too, she vengefully refuses, consigning them to a merciless slaughter as she rises to safety.

This is a great segment because it never explicitly tells you that the kids are killed for breaking a Halloween tradition, but if you examine it closely, that’s exactly what happens. It’s no coincidence that the undead children attack the group right after they put out a jack-o-lantern. As we learned from the opening segment, you’re supposed to keep them lit until the day is officially over, so it’s clear that the dead children come back to life because the living kids broke this important tradition.

Similarly, it’s also no coincidence that the one person who survives is the only one who respects the jack-o-lanterns. Rhonda keeps hers lit as she goes up the elevator, and just like she said, it keeps her safe from the undead children and all the other monsters and demons roaming the town that night.

Once we realize that, it becomes clear that this is more than just a typical anthology segment in which the “bad guys” get their comeuppance. Sure, that’s part of it, but the story is primarily about respecting Halloween and its traditions. The people who broke those traditions died, and the ones who followed them lived. Granted, that idea is never stated explicitly, so you can easily miss it if you’re not paying close attention, but once you see it, it becomes clear as day. 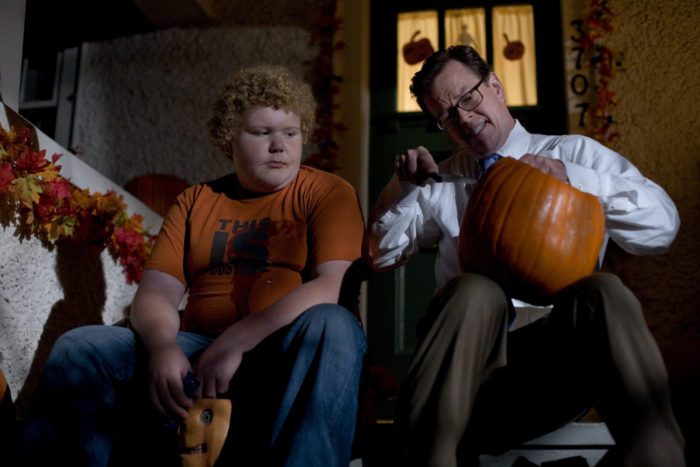 As I said, that’s just one example, but almost all the segments in Trick ‘r Treat follow that same basic pattern: if you want to live, you have to respect the traditions of Halloween. The only one that doesn’t is the story of the werewolf girls, but even that one deals with the importance of Halloween traditions in its own unique way (because what they do is their particular Halloween tradition), so it’s clearly the main theme of the movie.

And that, I would suggest, is how Trick ‘r Treat celebrates Halloween in a way that only a horror film can. See, in horror, death is often used as a tool to convey a message. For instance, if it’s a morality tale, people tend to die when they do bad things. We see this in a lot of anthology movies, and it’s also why many slasher films are accused of being overly conservative. The fact that people almost always die when they have sex conveys a clear message that sex (or at least premarital sex) is bad, regardless of whether or not it was intended by the filmmakers.

So when we look at Trick ‘r Treat through this lens, it becomes clear that the movie uses this typical horror tool to convey its message. Since people die when they break Halloween traditions, it’s essentially telling us how great the holiday is. It’s telling us that we should respect traditions like costumes, jack-o’-lanterns, and trick or treating, so it’s basically encouraging us to celebrate Halloween. And if that’s not a cinematic celebration of the holiday, then I don’t know what is.