Out of all the very powerful and capable final girls of horror, there is one in particular that has always stood out to me as a major source of inspiration, and that is none other than Scream’s Sidney Prescott (Neve Campbell). Although the Scream movies came about as a way of satirizing the slasher subgenre, Sidney’s character is anything but a comedic caricature. Throughout all of the Scream films, she consistently proves that she is one of the most resourceful, resilient, and strong characters the genre has to offer.

In Scream (1996) it’s evident from the very beginning that Sidney is already a very hypervigilant person. She deliberately has her bedroom door trapped by the cupboard door so that no one can enter without her explicitly allowing it. It’s notable that she also already has an established backstory when we are introduced to her, inviting automatic sympathy from the audience.

Right from the beginning, we see that she’s not the type of person to just let people walk all over her or exploit her story. One of the most iconic moments in the film is when she punches Gale Weathers (Courtney Cox) who refuses to respect her boundaries (something which she does once again in the sequel under similar circumstances). Her justified anger and unwillingness to downplay it is an admirable trait that ensures she is never written off as a mere victim.

It’s a well-established fact that horror movies are the home of many a terrible boyfriend, and Scream’s Billy Loomis (Skeet Ulrich) certainly takes the cake. Aside from him being a homicidal serial killer, what makes his character so unsettling is the fact that some of his behavior is entirely probable and indeed familiar behavior to a lot of women and girls. What I’m talking about here is Billy’s consistent dismissal of Sidney’s trauma, and worst of all, his pushiness when it comes to their sex life.

Billy repeatedly complains about the decline of sexual activity in their relationship and seems none too happy about Sidney’s proposal that they settle for a ‘PG-13’ relationship. It’s blatant manipulation, but it makes his character feel all the more familiar, and in turn, makes Sidney even more empathetic.

Sidney’s trust is repeatedly violated throughout the franchise with each reveal of Ghostface’s true identity. The first of these is of course Billy himself, which comes as a particularly low blow considering Sidney had just slept with him shortly before the reveal. It’s heartbreaking for Sidney to realize that her own boyfriend, the person who was supposed to love her, has not only been taunting her the whole time but also murdered her mother. In true Sidney fashion, however, she’s quick to switch to survival mode and begin fighting for her life.

One of my favorite things about the way Sidney is written is that even in life-threatening situations she maintains her sense of humor. Even with her whole world crumbling around her with revelations of betrayal she still takes the opportunity to use the Ghostface voice to mock Billy and Stu (Matthew Lillard). She’s never afraid to make fun of whichever iteration of Ghostface is currently chasing after her, which is an incredibly endearing character trait.

Scream 2 (1997) begins with Sidney at college, and even though she is repeatedly receiving prank calls from people impersonating Ghostface, she doesn’t let it get to her and calls out the pranksters by pointing out their name and number. This is just one of the many ways she shows her self-sufficiency and ability to make a fool of those who seek to harm her.

What makes Sidney such a relatable and well-rounded character, though, is the fact that she isn’t just a one-dimensional paragon of strength and resilience. It would take a superhuman to go through all the things she does and remain unscathed, after all. Despite her determination, we see Sidney struggle with all that she’s gone through, particularly in Scream 3 (2000) where she suffers from nightmares and hallucinations involving both Ghostface and her deceased mother.

One of her notable weaknesses is that she takes her self-sufficiency to the extreme and refuses to be vulnerable or accept help from other people. In Scream 2, her friend Hallie (Elise Neal) reassures her that “it’s okay to break,” to which Sidney simply replies, “that’s not gonna happen.” In the third film, she is once again isolating herself, living alone in a remote house, something which Dewey (David Arquette) shows concern over. 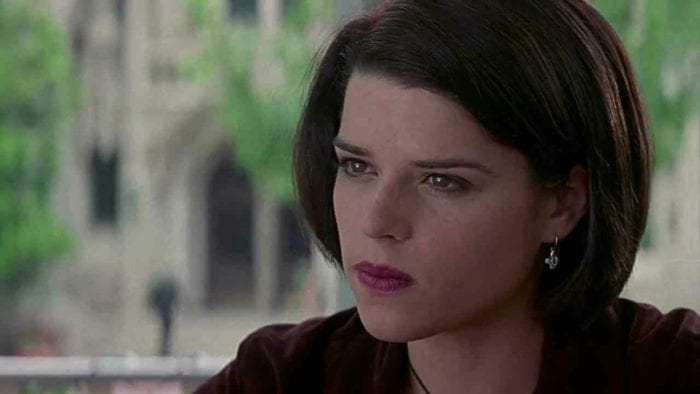 It’s no wonder Sidney has a hard time accepting the charity of those around her—the fact remains that most of the people she trusts turn out to be murderers, but the contrast between her resilience and the PTSD-like symptoms she inevitably suffers from, make her a refreshingly complex and realistic final girl.

Another thing that is so admirable about Sidney is the way she uses her own experiences to help others. At the beginning of Scream 3 we see that she is working at a women’s crisis counseling hotline under the name Laura, presumably moved to do so by her own experiences with interpersonal violence.

In Scream 4 (2011) when her cousin Jill (Emma Roberts) asks her how she deals with everything she’s been through, she says she tries to focus on helping her loved ones, once again highlighting her selflessness. When Jill’s friend Olivia (Marielle Jaffe) is being attacked across the street, Sidney barely hesitates before running across to help her. Despite everything she’s been through, she is still willing to throw herself in the path of danger if it means helping someone else.

Although Scream 4 is an extremely fun and worthy installment, I can’t help but feel a little disappointed in terms of where it leaves Sidney. She once again defeats the villain, with a defibrillator no less, but she is left severely wounded in the hospital with the fate of her mental well-being thrown into turmoil considering she has once again been put through a traumatic ordeal resulting in more lost loved ones.

In my opinion, Scream 3 leaves us with a near-perfect ending for Sidney; she’s living with Dewey and Gale in a supportive, loving environment. When she gets back from walking her dog, she hesitates by the door, deciding whether or not to set the alarm before leaving it. As she walks away a breeze blows the door ajar. She looks at it for a few seconds, then decides to leave it and walk away, evidently feeling safe for the first time in a long time.

This is obviously a much more heartwarming and satisfying resolution to her arc than where the franchise actually leaves her. In an ideal world Sidney, Gale, and Dewey are all living happily and safely and recovering from everything they’ve been through. Of course with Scream 5 still to come, this is very unlikely and the trio will probably face yet another threat to their lives, but we can hope that they will be afforded some much-deserved peace by the film’s resolution.

It’ll be interesting to see what kind of headspace Sidney is in following the events of Scream 4 (assuming that it will follow those events), but no matter what happens with her character, she’ll always have a place in my heart as one of my all-time favorite final girls.

In a genre filled with more than its fair share of female victims, we can look up to Sidney as an example of bravery and resilience in the face of trauma and violence. She’s only human and reacts to her circumstances as such, but at the same time, she won’t go down without a fight. One of my favorite moments of the franchise is in Scream 3 when Sidney’s long-lost half-brother Roman (Scott Foley) is revealed to be the killer and is going through the motions of explaining his motives, which Sidney is having none of. She points out that the only reason he kills is because he wants to, angrily asking “why don’t you take some f*cking responsibility?”

Even though Sidney is still willing to extend some sympathy to Roman, holding his hand while he dies, this line still rings true in terms of Sidney’s attitude towards all of the many Ghostfaces who have targeted her for various reasons. Sidney doesn’t care about your tragic backstory. She has one too, and guess what, she’s still a goddamn hero.