The franchise that brought horror film franchises back to life in the 1990s wrapped filming on its fifth installment today. The film will simply be known as Scream, rather than Scream 5, which is fitting in a sense. While series stalwarts Neve Campbell, Courtney Cox, David Arquette, and Executive Producer Kevin Williamson are back, this will be the first film in the franchise not directed by the late Wes Craven. We’re entering a new chapter here. 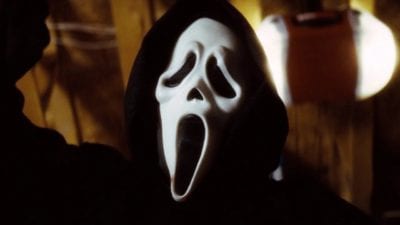 The duo behind Ready Or Not,  Matt Bettinelli-Olpin and Tyler Gillett usher Scream into a new era beginning on January 14th, 2022, when hopefully the world is able to enjoy the simple pleasures of a jump scare in a movie theater once again. Scream has long been known for its talented young casts and this film shall be no different, introducing Marley Shelton, Dylan Minnette, Jack Quaid, Jenna Ortega, Mikey Madison, Kyle Gallner, Mason Gooding, Jasmin Savoy Brown, and Melissa Barrera to the franchise’s family.

The only synopsis given for the new film thus far is that the film follows “a woman returning to her home town to try and find out who has been committing a series of vicious crimes.” While this certainly sounds like our beloved Sydney Prescott, perhaps we’re in store for something different this time?

What is it that you want to see from Scream 5, or Scream as we should get used to calling it? Are you prepared for the veteran cast members to get taken out or do you want to see them triumphant one more time? Can you wait for more than a full year to hear the words “Hello Sydney” again? Sound off in the comments and let us know!