Search
"I'll show you an altered beast!" by ThreeIfByBike is licensed under CC BY-SA 2.0

The late 1980s had its own fair share of interesting video games ranging from a variety of different consoles released by many different video game companies. This was back when arcades were a bit more popular than home consoles, but at home, consoles were growing in popularity. Some of these were the consoles sold by Sega. The 1980s were a booming time for Sega, a Japanese video game developer company that released home console games starting in the early 1980s. Most of their games are relatively familiar, such as Mortal Kombat or Sonic. However, there are some arcade Sega games that may have slipped under the radar of most gamers today, one of which is a game called Altered Beast.

This game was an anomaly among the console games of the 1980s, such as Nintendo’s lineup with Mario’s characters. Featuring the Greek god Zeus as a catalyst to drive the plot forward and make the main character “Rise from your grave!” was a lot different than Mario collecting mushrooms and rescuing Princess Peach.

This game wasn’t as brutal as the Mortal Kombat games as far as visceral blood on the screen, but there are the occasional decapitated heads and demon-slaying that make the content less tame than other games at the time. Although the main character for Altered Beast must rescue a princess as well, that is where the similarities end. However, this game is much more than an adventure quest set in the ancient world of mythological Greece. Its fantastical bent is an endearing testimony that some games can combine aesthetic elements in ways that we did not expect to find entertaining.

The History of Altered Beast

Altered Beast was originally an arcade game that was released in the arcades in 1988 as a 16-bit game, and it is a side scroller “beat ’em up” game. Later, it was released on many home consoles, but the console it is most known for was Sega. Namely, the Sega Master System and later on Sega Genesis and Sega System 16.

Makoto Uchida was the game developer for the original Altered Beast, and he went on to develop other games such as Golden Axe, Alien Storm, Wing War, the Dynamite Deka series, and Alien Front. Altered Beast was a unique idea at the time in that the main character started out as a strong muscular protagonist who had the chance to grow even stronger as the game went on. Most games focus on depleting health at the time, so this spin was a refreshing idea.

Uchida’s inspiration for the game came from many sources, ranging from the Howling movies to Greek mythology. Sega has since released games with heavy Greek mythology influences, but it appears that Altered Beast began that trend.

This game’s story follows the main character, a nameless centurion, who must find the Greek goddess Athena who was kidnapped by Neff, also known as Majin in the original Japanese game. Unlike Athena and Zeus, Neff is not included in the real Greek pantheon; he is a character of Uchida’s making. His Japanese name Majin roughly translates to “demon god” or a “magician” since he plays the role of the ruling head of the Greek Underworld. Hades is the ruler of the underworld in classical Greek Mythology, but Uchida makes for an interesting twist to the lore.

This brings us to the game’s aesthetic inspiration, Greek mythology. At first glance, it may seem out of place to have were-creatures and all manners of otherworldly entities, but werewolves were actually part of the original mythos to some degree. The Legend of Lycaon is probably where Uchida got the inspiration for the main character in Altered Beast who has transformation abilities. The Legend of Lycaon is the story about Zeus turning Lycaon, the son of Pelasgus, into a wolf because Lycaon served Zeus some chopped-up children.

Throughout the game, the centurion does not already have the ability to shapeshift at will but must instead collect spirit orbs in order to transform. At the end of every level, the centurion loses these orbs, even if he defeats the boss of that level, and must acquire them again in the next level in order to transform into the were-creature of that level. There are five levels and five different transformations: normal werewolf, dragon, were-bear, were-tiger, and golden werewolf. 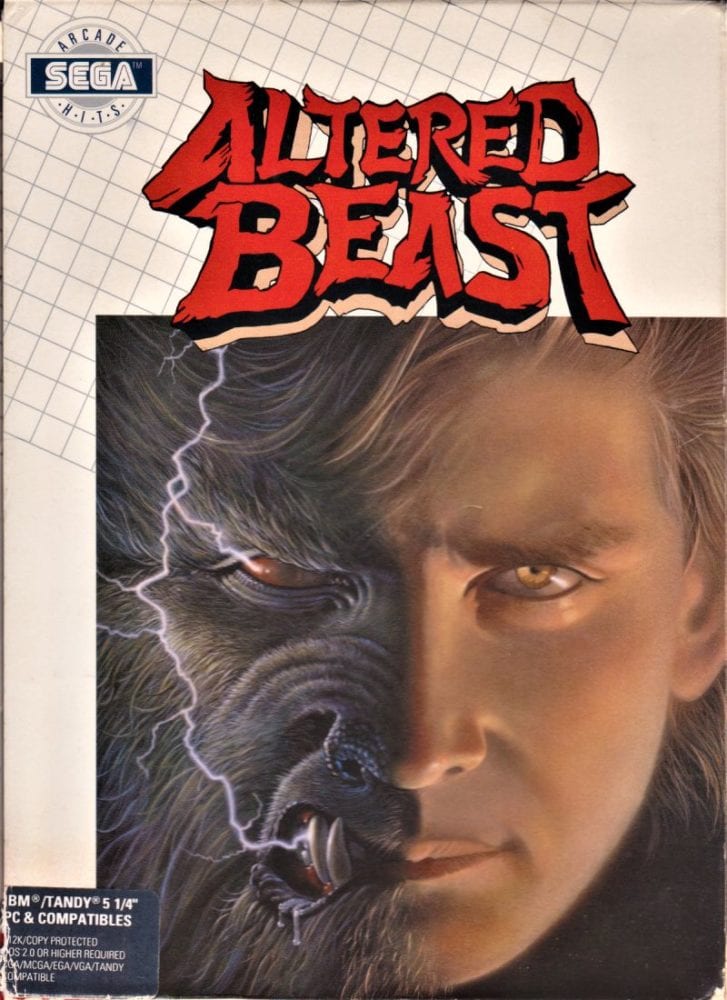 The Many Evolutions of Altered Beast

Altered Beast has undergone many different reincarnations and evolutionary stages throughout the entirety of its existence. In 1988, the original 16-bit debuted via Sega, but there were at least four other versions that came out between then and even as recent as 2020.

After the 16-Bit was released in arcades, the next Altered Beast did not come for a long time. After a while, the game faded into obscurity but soon enough it emerged into the public in a new form. In 2002, 3D6 Games released a sequel called Altered Beast: Guardian of the Realms. Most of the game’s design and aesthetic qualities remained the same or similar, but game mechanics were modified with more transformation options and supernatural abilities.

In 2005, Play Station released a revamped Altered Beast known as Jūōki: Project Altered Beast. The only aspect of the original game was that the main character, named Luke Custer in this version, can shapeshift. The game is modernized with a more scientific explanation for why Custer can transform, which in this case is due to genetic modifications. Finally, in 2020, a fan-made version was made that is very similar to the 1988 arcade version.

Altered Beast has many features that made stand out from its peers. Besides the unique game mechanics, it had a distinct style and feel that distinguished it from many other games on the market, including games made by Ushida himself. The game truly was a gem and is worth checking out, whether it’s on the original 16-bit or the 2020 fan remake.