I love Christmas-themed horror movies. In fact, my yearly Christmas viewing slate is made up of almost entirely horror films (the one exception is A Christmas Story), so holiday frights hold a very special place in my heart. Naturally, when I first saw the trailer for Violent Night, I was hooked right away. I couldn’t wait to check out this cool new take on Santa Claus, and after finally getting the chance to see the film, I’m happy to say that I walked out of the theater a happy man.

Violent Night was directed by Tommy Wirkola, and it stars David Harbour, John Leguizamo, and Leah Brady. In the film, a super-rich family called the Lightstones gets together to celebrate Christmas Eve, but unbeknownst to them, a group of highly trained professional criminals plans on breaking into their house and stealing $300 million of their money that night. At first, it looks like the thieves’ plan is going to go off without a hitch, but they soon face an unexpected obstacle: Santa Claus (played by David Harbour). He just so happens to be visiting the Lightstone house at the exact time these criminals are breaking in, and even though he initially tries to sneak away without getting involved in the situation, he eventually decides to stick around and help the Lightsones fight back.

I have to be honest, for about the first hour or so of Violent Night, I wasn’t loving it. It was pretty different from what I was expecting, and while it had its moments, it was extremely hit-or-miss. For example, when the story begins, Santa is basically a drunk who cares more about booze and cookies than about the kids he brings presents to, and the film leans very heavily into that idea.

Granted, he’s not so bad that he neglects his job, but he’s very unhappy doing it. He’s clearly just going through the motions, and unsurprisingly, he acts in some very un-Santa Claus-like ways as he goes about spreading Christmas joy. Most notably, he drinks a ton, he swears a lot, and at one point he even throws up after drinking too much. As you can probably guess, this is all played for laughs.

But unfortunately, this drunk Santa routine isn’t nearly as funny as I wanted it to be. Sure, the first hour of Violent Night has its fair share of effective jokes, and there were even a whole bunch of times when I laughed out loud in the theater. But there are also just as many gags that fall flat, so the good and the bad here more or less cancel each other out.

On top of that, the characters in this part of the film are about as bland as can be. The robbers are just the typical mustache-twirling villains we’ve seen a million times before, and the Lightstones are basically a bunch of eye-roll-inducingly stereotypical rich people. There’s nothing even remotely interesting about any of these characters, so I simply couldn’t care about them or their story.

Last but not least, and most disappointingly of all, the action in the first hour of Violent Night is a bit underwhelming. I was expecting Santa to be a John Wick-esque badass right from the start, but instead, he’s basically just a regular guy who bumbles his way through his first few fights. Granted, he shows flashes of legit combat skills every once in a while, but for the most part, he gets by on luck more than anything else. 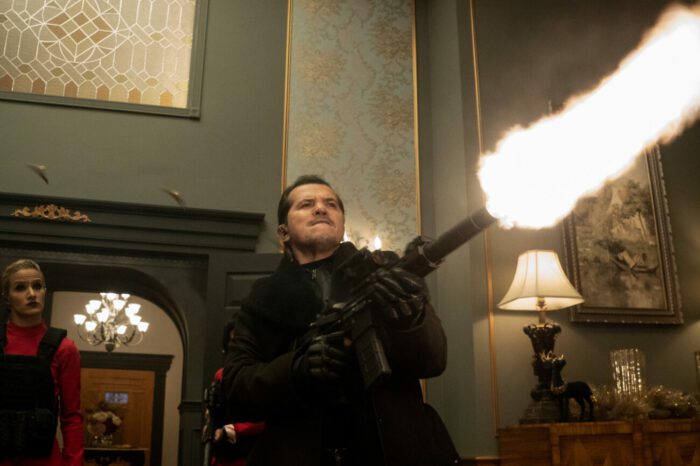 Because of all that, I was feeling pretty down about Violent Night for the first half or so, but then something unexpected happened. At about the one-hour mark, the movie did a complete 180, and it became everything I wanted it to be. To be fair, the characters (other than Santa) were still super bland, but the humor began to take a bit of a back seat, and the action came front and center in the best way possible.

I finally got the badass, unstoppable Santa I was hoping for, and he was glorious. It’s tough to put this into words, but David Harbour has the “it” factor that makes for a legit action hero. He just has the physicality of a fighter down pat, so I totally believed that he was a warrior Kris Kringle.

And when he goes to town on the bad guys, it’s a thing of bloody beauty (and I mean that very literally). This Santa Claus is absolutely brutal, and while there’s some shoddy CGI blood in Violent Night, the gore effects are mostly pretty good.

On top of that, the Lightstones eventually get in on the action too, and the youngest Lightstone, Trudy, fights back in a way that’s going to put a smile on a lot of people’s faces. I won’t spoil what she does, but I will say that it harkens back to a beloved Christmas classic, and it updates that film’s ideas in an awesomely horrific way.

So despite the disappointing first half, my opinion of Violent Night did a complete 180 by the time the credits began to roll. Sure, it’s still not exactly a shining example of the fine art of cinema, but it’s one hell of a fun ride. It has enough brutal Santa Claus action to make any horror fan happy, so if you’re looking for something new to add to your Christmas genre slate this year, I definitely recommend that you check this movie out.