Peter Strickland is a hard filmmaker to describe to the uninitiated. Like any other auteur, he has his tropes: a surrealist bent, a feminist perspective, and fascination with the power dynamics of sex, domination, and submission, a flair for the macabre, a fascination with body processes, and a fetish for sound. All these things that are explored to varying degrees in each of his previous films return with abandon in Flux Gourmet, perhaps his most accessible and certainly lightest and most comic film.

Be warned, though: anyone who’s seen this and no other Strickland films might well be shocked to hear it described as his most accessible. That’s due largely to the nature of the characters and story being told though. Flux Gourmet comprises a satirical, deadpan, and darkly comic exploration of narcissism and the power dynamics behind the collaborative artistic process. As you might expect, the characters that emerge from this world are pretty hard work, above all to one another.

The film takes place over a month at an artistic institute and retreat that specialises in “sonic catering,” the creation and performance of installation pieces themed around food (music created by amplifying and distorting the noise made by food being cooked and such). The band currently taking up residence is the as yet unnamed trio led by the deeply narcissistic Elle (Fatma Mohamed—a hoot!) and her bandmates-slash-former lovers, the sulky and perpetually horny Billy Rubin (Asa Butterfield, still looking ten years younger than he is) and the browbeaten Lamina (Ariane Labed, who’s still not quite found a project as good as she is in it, but she’s getting there). The institute is presided over by the sweet, neurotic, and domineering Jan Stevens (Gwendoline Christie, who might have the most post-Game of Thrones career of any of its alums, thanks in no small part to her collaborations with Strickland) who constantly butts heads with her uncooperative prima donna.

Injecting some much-needed sanity into the group is the film’s narrator and protagonist Stone (Makis Papadimitriou), whose duty to document the band’s progress is continually waylaid by his chronic acid reflux, which preoccupies his mind as much as the band’s internal quarrels and leads him to frequently visit the insufferably patrician classics-quoting local GP (a blissfully loathsome performance by Richard Bremmer). Stone’s laconic, well-meaning, non-judgmental layperson’s perspective may be the film’s saving grace if you struggle to find the delusional egotists elsewhere enlightening company.

It’s easy to imagine a viewer growing quickly frustrated with any of Strickland’s films. There’s not one of them I wouldn’t describe as ‘difficult,’ nor are there any I wouldn’t recommend for more adventurous viewers, Flux Gourmet included. When indulged, their obtuseness often gives way to striking, memorable, mordantly funny, and frequently haunting moments that while hard to massage into a definable statement will reward patient viewers. I might call Flux Gourmet his most accessible on account of it taking itself and its characters the least seriously. There are moments of unexpected poignancy and not all its characters are unsympathetic, but Flux Gourmet revels and delights in the absurdities and pretensions of its characters, giving them enough rope to hang themselves and perhaps, in the aftermath, reveal something honest and relatable.

The characters Strickland and his cast have created are undeniably brilliant, each one wrestling with dual identities: the real them, and the performance they would have those around them believe and admire. Jan and Elle constantly project a cartoonish facade of virtuosity, Billy has that ridiculous emo-boy haircut that conceals half his face. Lamina’s hardened exterior protects someone wrestling with the same pains as any of us. Above all, there’s Stone, tragically incapable of hiding his intimate embarrassments, his body rebelling by building up gastric wind he agonizingly tries to repress. 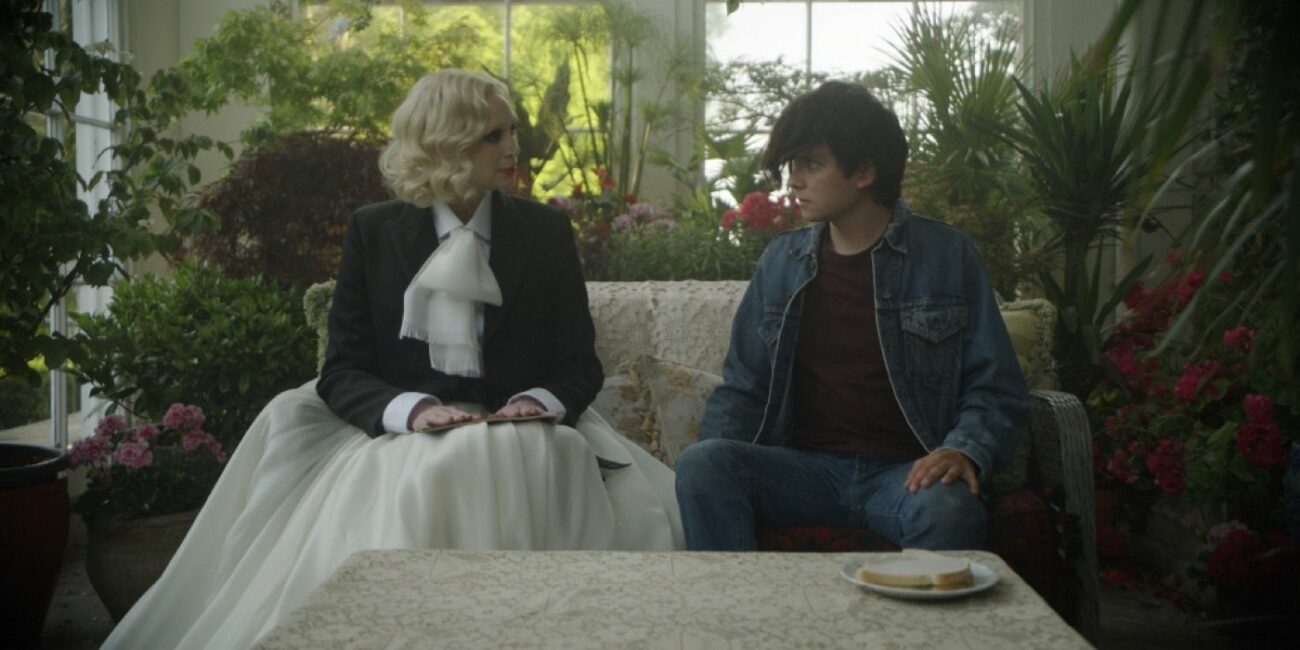 I appreciated that Strickland doesn’t lay into the absurdity of the band’s performances and allows the audience to reject or ascribe meaning to their outlandish exhibitions themselves. It’s all too easy to rip into the creative process in its premature state, and Strickland is no stranger to walking that tightrope between the sublime and the ridiculous himself. From him, the comic absurdities of their performance pieces come from a place of affection and occasionally even credulity. As vain and ridiculous as his characters often are, he doesn’t lose sight of the realistic end goal of portraying people and the way they interact. Where the deadpan satire of a filmmaker like Yorgos Lanthimos contains only scornful contempt, Strickland’s births a wealth of different emotions, some very unexpected. Every character, no matter how obnoxious their behavior elsewhere may be, gets at least one moment of insight, tragedy, vulnerability, or even righteousness.

Central to the film’s success are the characterizations of the cast. Flux Gourmet might not be the kind of thing that comes to mind when one thinks of what one might sniffily term an ‘actor’s film,’ but each member of Strickland’s cast expands to fill every corner of the roles they’ve been given. Christie is fabulous and I’d love to see her in other more daring comic roles in the future, she’s having a blast with her role as the director, flitting from diplomatic to imperious to desperate with immaculate comedic skill. Like her In Fabric co-star Mohamed, she’s an ideal muse for Strickland, interpreting his characters with note-perfect humor. Labed and Papadimitriou are an essentially humane counterpoint to their cracked co-stars, bringing subtle emotional stakes and vulnerability to the otherwise very dry and hysterical powerplay.

Perhaps Butterfield leaves a bit to be desired. Although game, he seems a little lost and doesn’t bring quite the same depth to his role as his co-stars. It must also be conceded that not everything in Flux Gourmet works. It’s a trifle overlong and at a glance, it’s easy to see what can go. Although they payoff eventually, the sequences where the band engages in exercises to act out scenes as Jan instructs them aren’t that funny, contribute less than most and do drag on. The scenes where Stone interviews each member of the band are much better and produce some of the film’s best moments, although perhaps that’s me. I love good, hearty character building and was surprised to find so much of it here.