When it comes to lower-budget films it seems you can go one of two ways: make the film look incredible to be taken more seriously, or spend the majority of your money on SFX and say to hell with the rest of the film. Thinking about how to formulate this review was difficult as I don’t want to full-on gush about one movie, and then rip the other one to pieces. When watching films, though I still look at them with a critical eye, I try and take a step back to think about the semi-infamous John Squires tweet. At the end of the day, films are, generally, meant to entertain us, but what if a film fails to entertain us? Film criticism seems to be taken way too hard because at the end of the day, isn’t art subjective? I would never get upset with someone who thought it was dumb that I like John Carpenter’s Ghosts of Mars because that film is enjoyable to me. All of this is to say I enjoyed one of these films, and I did not enjoy the other…I guess.

The Abandon (Written by Dwain Worrell and Directed by Jason Satterlund)

Some films are obviously inspired by films that came before them, and sometimes…just sometimes…the films that were inspired by something are better than the source material. Don’t get me wrong, I like the film Cube, and this is not a ripoff in any way, shape, or form, but The Abandon is a better Cube than Cube. Whereas there was very little horror in Cube and much more Sci-Fi, The Abandon does such an incredible job blending the two genres to create a particularly interesting and intense film.

The Abandon is a Sci-Fi psychological horror film that, for the majority, takes place in one location. The film surrounds Miles Willis (Jonathan Rosenthal) who is fighting in the Gulf War, which he cheekily refers to as the never-ending war…if only Miles knew. After getting shot in battle he promptly passes out, only to wake up to something worse than a troop of enemy soldiers; he wakes up in a box. Now, this is a fairly decent-sized box, for the time being, but it would still be a terrifying situation nonetheless. Miles notices the word “ABANDON” near the ceiling, though he soon comes to find out that isn’t the only thing that will be written on the wall for too long. 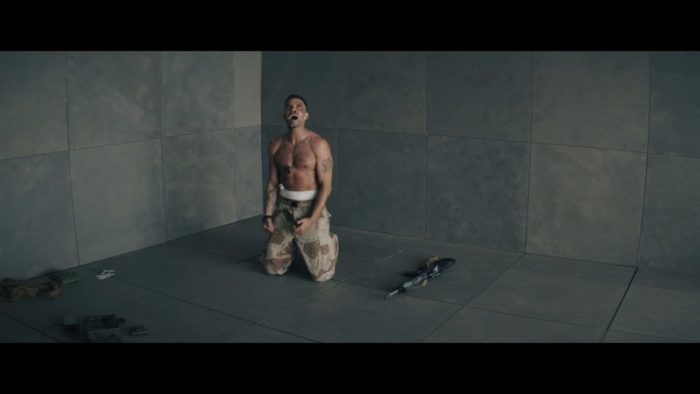 One of the things this film excels at is using its budget to make the film look good. Granted, when you write a script whose main location is one room, you can focus more on creating that one set to look as good as possible. The set design is just impeccable, and as the room begins to transform in some ways, it just continually stays impressive. A lesser film would use flimsy painted drywall or something easy to pick up and move around, but it really feels like we are trapped side-by-side with Miles in this ever-changing concrete box.

This [mainly] one set does an excellent job of working in the second main character Damsey Robins (Tamara Perry) through the use of Miles’ SAT phone. Rosenthal and Perry, even though they only act over the phone, have excellent chemistry, and it was portrayed very well by the actors. The tension only mounts throughout the well-paced film and lends a copious amount of claustrophobia. Worrell’s script is very well handled; he takes all of the scientific and mathematical mumbo jumbo and makes it sound interesting and engaging, but puts enough of the work back on the audience to make their own sense of what is going on. The Abandon’s brutal ambiguity just added to the overall impending dread that lurks deep in the corners of this film’s concrete walls.

The Chamber of Terror (Written and Directed by Michael Pereira)

The allure of films like Scary Movie started to fade as things like Epic Movie and Disaster Movie started to oversaturate the parody film subgenre. What started as an interesting and clever idea slowly morphed into a derivative set of flashy images with jokes that couldn’t hit the broad side of a barn. The Chamber of Terror feels like it is trying so much to emulate the films of yore, but with the acting and subtly of an Epic or Disaster Movie. The easiest way to describe it is what if “2 of the 6 writers of Scary Movie” binged every Tarantino film, wrote a script in a night, then jumped into filming it the very next day.

Let’s start with the disjunctive timeline. Like a Tarantino movie, this does not tell the story straightforwardly, making us jump all over the timeline of the story. Whereas Tarantino has worked tirelessly to perfect the disjunctiveness, this movie uses it as an homage; it feels like it was retconned to make it feel more interesting than it actually is. Next is the dialogue. When it comes to dialogue in a movie it takes a very talented wordsmith, as well as a very talented director, to make all dialogue feel as natural as possible. Tarantino has crafted that talent through years of hard work and studying, this script is just another in a long line of scripts that try to be snappy and witty, but in the end, it just comes off as forced and awkward. Lines like, “c*ck f*ck,” “don’t @ me Ava,” and “take a wild guess, honey b*tch,” just truly don’t land, it looks as if the actors aren’t even sure about the purpose of the lines. That being said though, the saving grace of this movie is the SFX work. The practical effects in this movie are astounding and pretty gnarly. From neck slits to pulverizing someone’s head with a decapitated head look absolutely great. There are a few moments of horror in this movie that really show the talent that Pereira can have, it’s almost as if he tried less to make Tarantino’s Psycho Goreman, and tried more to make a Michael Pereira splatterfest, the outcome would have been incredibly different. There is a good movie somewhere in this mess, but its almost accidental B-ness of it all just muddies the waters and makes the movie feel more like a drag and less like a romp. 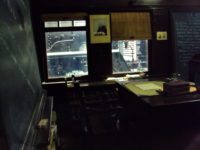