In the tradition of Jumanji, Beyond the Gates, Game of Death (2017), and countless other movies about board games comes another movie about a board game! At least this one looks like an enjoyable farce on the genre. The Gatlopp trailer (Formally known as Gatlopp: Hell of a Game) previews a group of friends getting together after a decade-long absence and deciding to play a drinking game while partying together. After a few mischievous occurrences, the group decides to check the game rules on the box that, just like the iTunes terms and conditions, tells them if one player doesn’t win before sunrise, they will end up playing the game for eternity. You know, just like Monopoly. 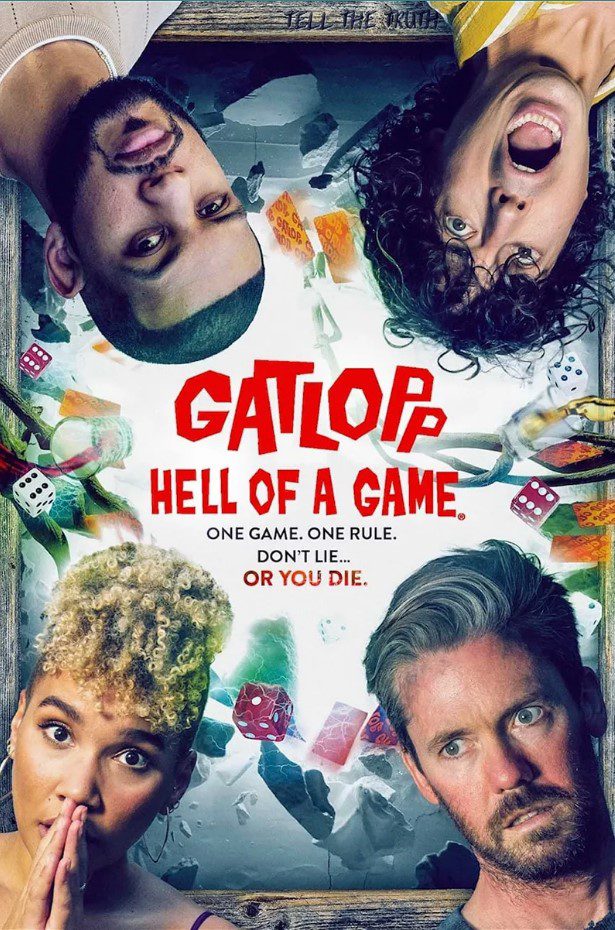 Fans of TBS’ Miracle Workers will immediately notice Jon Bass in the Gatlopp trailer. Bass plays Cliff, the party planner with a nostalgic joy to have the crew back together. However, their reunion comes at the expense of Paul’s (screenwriter Jim Mahoney) marriage and the annoyance of Sam (The Umbrella Academy’s Emmy Raver-Lampman) and Troy (Insecure’s Sarunas J. Jackson), who’ve become workaholics wrapped up in their personal pursuits. When Paul gets a call from his ex, Alice (Shelley Hennig), asking him to finalize the divorce papers, Cliff’s drinking game seems like the best way to get into the party zone. That is until it forces them to tell the truth or inflicts painful consequences.

What makes Gatlopp different from the plethora of board game horror we’ve already seen is that this looks more like Game Night with a supernatural twist and less like the ominous atmosphere of a Ouija movie. The Gatlopp trailer even had me laughing at points, which is rare for a preview, and kept me curious about what will potentially happen, especially after Sam tells Paul to go to hell and he vanishes. What kind of cursed fates awaits the players that aren’t crowned the winner? Will they be returned, or will they suffer in the nether realm?

Gatlopp played as part of the Calgary Underground Film Festival last week and was welcomed to mostly positive reviews. TASTETHEMILKOFCHOCULA of The Scariest Things says Mahoney “balances the fear and the funny well,” and Josh Batchelder of Josh at the Movies praises its “ample randomness and gotcha surprises.” Who doesn’t love a good horror-comedy, right?

Gatlopp: Hell of a Game will be available on VOD beginning June 16.