Experiencing its world premiere at Panic Fest 2022, I’m overjoyed to report that Dawning, the directorial debut of Young Min-Kim, is an absolute banger! Within the first minute I was more invested than I’ve been in any film at this festival so far. By 15 minutes in, I was ready to call it one of the scariest movies I’ve seen in years, and by the end I’m prepared to call it one of my favourite movies of 2022!

It opens in shocking fashion with the abrupt suicide of a husband and father, before flashing forwards ten years to his now grown-up daughter Hae-jin (a phenomenal debut performance from Kim Ellis). Hae-jin works in New York as a trauma therapist and finds her grief triggered by the story of one of her patients, and is haunted by visual and auditory hallucinations, sleep paralysis, and waking nightmares. Disturbed, she makes an impulsive visit back to the family farm, to which she hasn’t been in many years and is now tended by her younger sister Soojin (an equally superb Veronica Kim) who has just separated from her abusive boyfriend. The film takes many surprising and unsettling twists from there on as Hae-jin’s mental state deteriorates along with her initially amicable interactions with her sister.

There’s a ton of baggage between the two women that goes beyond their shared childhood trauma. There’s subtle themes of identity and diaspora in their behavior. Despite the film being set in America, I’m pretty sure every actor we see is of East-Asian descent, even the very minor characters. Even when speaking with her sister, Hae-jin flits back and forth between English and Korean, while Soojin sticks to Korean. Likewise, the family farm, though in L.A. looks unmistakably Korean, an implicit condemnation of Hae-jin’s abandonment of her culture as well as her family that just adds to the tension between the leads. Kim and Ellis give such tremendous performances with a gulf of fraught emotion between them that waxes and wanes through their interactions. The moments where they get lost in conversation and become sisters once again feel real and sincerely touching, cruelly laying the groundwork for the devastating emotional gut punches the film has in store. 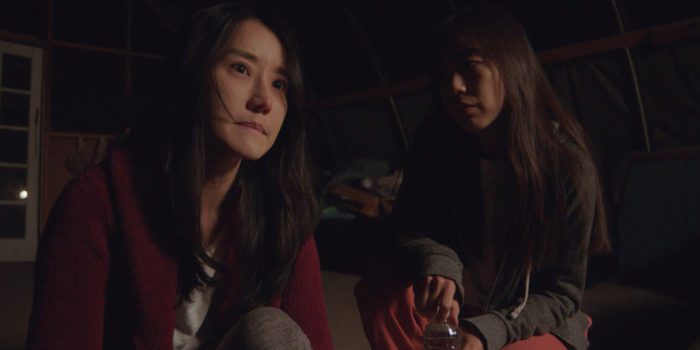 The film begins with a dedication “to the hurting,” and it speaks to the film’s frankness and sincerity in its exploration of grief and trauma and the disruptive effects they can have on the human spirit,  co-mingling with guilt, blame, and resentment, and driving wedges between people who were once as close as two people can be. It’s such good writing and it strikes a chord like only truly honest art can, and the actors all play it perfectly, down to the very smallest roles.

The film is a slow-burning character drama at heart, but that doesn’t mean it can’t provide some visceral chills at points. I’ve suffered from sleep paralysis at points and this movie does a mean job of conveying the sheer, excruciating terror it evokes, with one first act scene letting you in early on how genuinely unsettling this film is going to be. But what truly makes it special is that it offsets those scares with such heart and vulnerability. You completely believe the characters, and although the story takes some weird detours and tells itself in what is, honestly, a more convoluted fashion than I thought necessary, you still buy in because the situation is so compelling, even once you realise that the situation isn’t at all what it seems.

I do think that sometimes this movie is a bit too clever for its own good with its story construction, and a more direct and forthright telling could’ve hit harder, but the fact that this film manages to establish one viscerally compelling scenario, turn it on its head, and rebuild a different one almost from scratch, all in the space of just 72 minutes, testifies to the sheer talent on display and the sure handle it has on its emotions and themes. It’s a wonderful, heartbreaking, tragic and deeply poignant meditation on grief, loss, and forgiveness, and I feel immensely privileged to have been one of the first to view it.