This article contains spoilers. If you haven’t caught up on the first season of I Know What You Did Last Summer, we suggest doing so before reading on!

So where were we?

Let’s do a quick recap of last week’s four-episode premiere bomb of the new I Know What You Did Last Summer—full spoilers, as usual: Lennon and her group of friends were involved in a deadly accident one year ago. The victim of the accident was Lennon’s twin sister Alison—only, it was really Alison who was behind the wheel and Lennon who was killed in the accident, with Alison assuming her sister’s identity to protect herself. Now, a series of killings has put everyone in town on edge, but especially our original group of friends who are getting ominous messages claiming to be from “Alison.” “Alison’s” very much dead body was just found floating in the ocean, only for two more killings to happen at the wake held for her and a pair of messages to be sent out from her phone: “I’m still here,” and “I still know.” Keeping track so far? Then let’s dive into the first episode of the season’s second half, “Mukbang.”

So after opening on a brief scene where we watch Margot filming a mukbang—a type of YouTube video where someone films themself binge eating while telling a story, now recognized as glorifying eating disorders and rightfully described as self-harm in a warning message before the episode—“Mukbang” the episode then takes us to an impromptu town meeting being held, which is going about as well as you would expect when five murders have taken place in the span of less than a week.

A lot happens in “Mukbang,” but I’d rather not just regurgitate everything you’ve just watched, so I’ll try and sum things up briefly: the local police start questioning everyone who was at the funeral while following up on deceased officer Doug’s discoveries surrounding “Alison’s” OnlyFans account and the Bitcoin transactions between Dale and the account. Clara sneaks up on Dylan while he’s carving Alison’s name into the cave wall, saying run of the mill spooky weirdo stuff—“That won’t save you,” “There’s no redemption in this life” type stuff—but revealing that she remembers him from “last time,” which Dylan correctly guesses means that she had seen the gang leaving the cave the night of “Alison’s” death. Everyone we’ve met so far gets questioned by the police; the gang is still keeping everything they know to themselves, which I’m sure will turn out just fine for everyone, and while Clara is being questioned, the gang decides to investigate her house in hopes of finding Alison’s phone or another piece of evidence to prove she’s behind the killings. After making a couple of relevant discoveries, Clara comes home and notices that someone is there, leading to a tense encounter where she hunts the gang down with a shotgun and some dogs, but the gang manages to escape—and someone attacks Clara with a machete, with the episode ending on the bloody machete and a woman’s voice (likely Clara’s) whimpering for help.

Now, for the interesting parts of “Mukbang.” Firstly, cracks are starting to show within our main group, with Riley and Margot both feeling like “Lennon” is acting suspicious—and not like her usual self. The two of them might be getting suspicious, but so far Dylan doesn’t seem to suspect anything or doesn’t want to due to his complicated feelings regarding both sisters. We’ll have to wait and see, but it feels like the seeds are being planted for a split in the group between Dylan/“Lennon” and Riley/Margot. On a related note, every interaction between Dylan and “Lennon” continues to be pure gold. The way she looks at him when he says he doesn’t want to get her in trouble is priceless. Madison Iseman brilliantly sells the overwhelming mixture of feelings that are still very much alive for her long-time crush but that she can’t risk acting out on without possibly giving up the secret about her identity. As much as I feel for her, though, the tragic irony of her situation with Dylan is a glorious gift that keeps on giving in terms of dark humor.

There’s also…something going on between Riley and Dylan. We know that they had been together at some point the night of the accident, and Riley had previously mentioned not worrying about “the bouncy house,” but it’s not entirely clear if it’s setup for a love triangle of sorts between her, Dylan, and “Lennon” or if it’s simply just her trying to mend a friendship. Then there’s Margot, who’s growing more and more suspicious of “Lennon”—and, rethinking how she feels about who she thinks is her longtime friend—especially after “Lennon” had been avoiding her after their kiss in Episode 4. Margot’s mental health might not be given particular emphasis with everything else that’s happening, but it’s still a key part of her character, and the show seems to be doing a good job of portraying her struggle to keep herself in a good place. Between Margot and Riley’s suspicions, Dylan’s hangups about Alison/Lennon, the rift between Margot and “Lennon” and…whatever the deal is with Riley and Dylan, there’s a lot of tension seeping into the core group, and I can’t imagine it will take very long before they’re all growing suspicious of—and turning on—each other. I can only imagine it will make for absolutely delicious television in the weeks to come.

Secondly, “Mukbang” shows that they’re leaning into the weird cult sh*t. The cult has been one of the weirder—and naturally, more intriguing—mysteries to spiral out from the show’s core, and I’m glad to see them embracing this storyline and not being afraid to go into the weird and dark stuff. The set design is jaw-droppingly impressive; the cult compound itself is a beautifully ruined environment, and when we first see it, it’s a feeling similar to what you would feel in something like Indiana Jones or Uncharted, when you would go over a hill or around a cliff face and see the ruins of a once-grand place forgotten by time. When the gang gets inside, it maintains this impressive sense of scale. It’s a sprawling, overgrown Chernobylesque mess of residential buildings. Makeshift medical rooms hint at dark experiments and rituals performed in the past, and a massive amphitheater is now leaking and being reclaimed by nature. We don’t get much of what happened with the cult, but as we’ll find out, their ties run deeper into the island than anyone would like to think.

Also, it’s mentioned at the beginning of “Mukbang” that the mass suicides happened 25 years ago, a number that I’m sure is mostly inconsequential but that I’m choosing to believe is another Twin Peaks reference, mostly because it would reinforce my own thoughts that the show was giving off heavy vintage Peaks vibes, and because it’s my thought process so you can’t stop me.

The gang does find two pieces of bombshell evidence in the ruins of the cult compound but not the kind they were hoping for. First, as the medical examiner explains to the police chief, the spiders that were found in Johnny’s head are a brain-eating variety that is native to Antarctica and can’t survive out in the tropical environment of the island, meaning they need to be kept cold—and we immediately get to see that the spiders are being kept in a room somewhere in the compound. We’re led to believe that Clara is the one who has been keeping them, but given how much focus the episode puts on her as a suspect, naturally, she’s been attacked and is likely dead by the end of it, so it’s almost definitely somebody else who’s been hiding out in the ruins of the compound.

Secondly, one of the pictures in a photo album that “Lennon” finds is of Clara’s wedding day, and the groom is Lennon’s dear old dad, Bruce. And as we find out, Lennon knew something about her mom that she had been keeping from Allison—something that she felt was causing a rift between her and everyone she was close with, and that she no longer wanted to keep it a secret from Allison. Turns out, the whole “Lennon is dead so you have to pretend to be her” isn’t the only damaging secret that Bruce has shared with one of his daughters. Even further, Lennon had gotten a ride home from her dad the night of the accident, and Bruce kicking her out of the car after the two of them had a fight is how she wound up along the side of the road where Alison and the gang hit her in the first place.

While he hasn’t been outwardly abusive or malicious (that we’ve seen), Bruce is looking worse and worse the further we get into the show. He’s coerced both his daughters into keeping secrets while hiding his own past related to the cult from everyone involved. Clara once talked about “protecting” him and “Alison” not being “the one,” so he certainly looks to be neck-deep into…whatever what’s left of the cult might be planning. Dylan’s mom might also be involved since that was how he first thought Clara would know him—and in the brief times that we’ve met her, she certainly seems like the sort who would have been involved with the cult back in the day, but that’s strictly speculation for the time being. 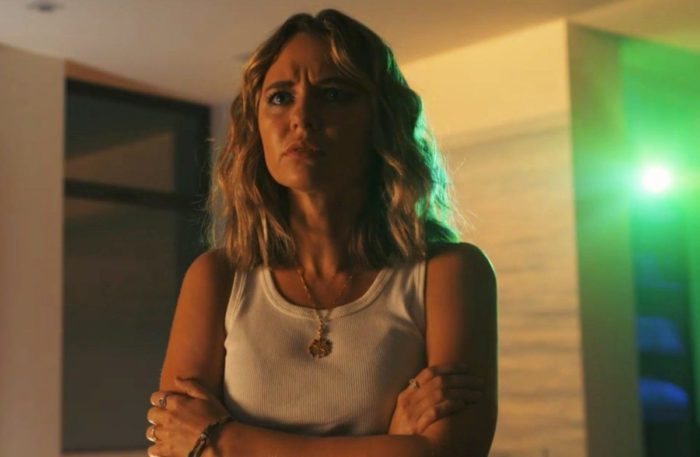 What we do know now is that “Lennon” is at least aware that her dad was involved with the cult and that he’s been hiding that involvement from her, leading her to leave their house at the end of “Mukbang” and take up temporary residence with Margot—Margot is asleep when “Lennon” gets there, so we’ll have to see how much air clearing there is next week, if any.

One final note: it’s definitely a woman’s voice that we hear feebly whispering for help at the end of the episode, but we also never see Dylan successfully escape the compound, meaning he is either in peril or involved, but once again, we’re going to have to watch to find out.

There are really two central mysteries at play in I Know What You Did Last Summer: what really happened on the night of Lennon’s death, and who is currently killing anyone who is a potential suspect or was getting close to the truth about what happened. “Mukbang” continues to do a very good job at keeping both of those central mysteries interesting and tense, constantly giving us more and more information about the first one while continuously throwing us off almost any sense of tangible progress in the second one by constantly throwing us one false lead and red herring after another. It’s a tricky balancing act to try and maintain, and I hope that the show can keep it up until the season ends.

Twin PeaksCultsI Know What You Did Last SummerNew TV

More From: I Know What You Did Last Summer