In the horror genre, we’ve had our fair share of characters looking to get away from botched robberies, traumatic missions, or both, only to end up in a far worse situation. We’ve seen movies that pit villainous characters against forces of evil they never before believed in and sure as hell did not see coming. This is a trope that isn’t seen very often, but the result is usually effective. Don’t like the characters? You’ll be satisfied watching them die. Find empathy for them? You can root to see them make it out alive. Movies like Dog Soldiers, Realms, and last year’s Bloody Hell come instantly to mind. Adding to that list, now we have Kris Roselli’s Hideout.

A supernatural thriller by way of Reservoir Dogs, Hideout begins with images of a town in trouble. Boarded-up homes, vacant buildings, and flyers of missing children show you the desolation of a place once prosperous. Where you find shuddered homes and businesses, you also find desperate people, and we meet our characters fleeing the scene of a liquor store robbery gone wrong. With one of the members injured with nowhere to go, the four turn off the main road that leads out of the city and seek help at a rural farmhouse in the middle of nowhere.

The immediate tension and fast-paced drama that unfolds while brother and sister Kyle (Bryan Enright) and Sarah (Katie Lyons) fight to save the wounded Reed’s (Chris Wolfe) life is thick and palpable. Entering the home of good Samaritan Bee (Janice LaFlam), the pair say a hunting accident was the cause of the injury to Reed’s abdomen. Nothing feels right. As someone who usually has an eye for detail, the house felt as desolate as the town Roselli shows us at the start of the film, articulated by the mounted buck skulls on the walls. The fourth member of the crew, Rick (Eric Francis Melargni), goes missing in the short hop between car and house, and Kyle assumes he’s run off to save his own skin, leaving the rest of them for dead.

Though unnoticeable at the moment, the foreboding essence of the house the criminals now inhabit, along with Rick’s disappearance, doesn’t seem to immediately affect the mindset of the panicking criminals. Add in Bee’s immediate willingness to help and ultimately stitch up the injured Reed, despite the intruders providing her with a bland account about a hunting trip gone wrong, and the obvious lie would normally ask for clarification. Bee can likely tell it’s a lie based solely on their clothing, not to mention the fact it’s so late in the evening, but this doesn’t take expeditious precedence. With their taut delivery, Roselli, the cast, and the film’s music director, Jonathan Price, prove that people will not consider these details with enough focus on the action. It’s a simple distraction, but it works effortlessly in Hideout, providing cover for the red flags a person would typically notice through the chaos of panic. This small stylistic portion of the film proves that you don’t need huge budgets or effects to make people’s hearts pound.

Hideout’s first half works in various ways, especially after meeting the antagonizing and detached Rose (Audrey Kovar), Bee’s granddaughter. Rose’s presence almost immediately spooks and enchants Kyle. It’s a weird introductory moment that seethes with simultaneous attraction and fear, giving Rose an air of mystery that only grows as we delve into her character, especially as the film twists the plot to confuse who the victims are and who the villains are. 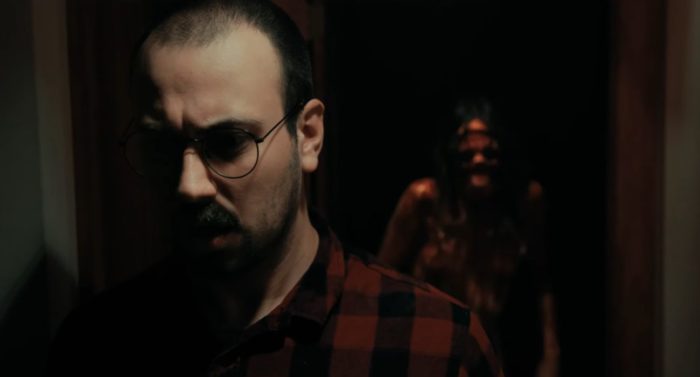 All of the regular home invasion thriller aspects are present: the visitation of the singular police officer (Omar Torres), aggressive leadership tactics, and internal power shifts in the team leadership. The creep factor hits its high points in subtle dreamlike moments of tremendous practical effects work where a stuffed bear turns its head in the background and a woman without a face approaches Kyle. Mind games begin to overwhelm the characters as the movie continues leading to a more pressing feeling of imminent danger among the robbers. It’s a ghoulish and gory good time, but as the film enters its second act, the tone shifts to brutality as Reed wakes up and asserts dominance over everyone inside the home. Where there are a couple of off moments, the acting overall in Hideout is pretty good. Chris Wolfe, in particular, is fantastic. His vicious sociopathic approach to Reed helps build a new atmosphere of danger as the evolving situation creates a new disconcerting monster.

My biggest issue in the film is that the second act hits a bit of a lag, running on for just a little too long as it tries to bridge the first and final acts. While the group’s power dynamics work with Reed as the prevalent cold-blooded member, a scene where Kyle goes psychotic towards Rose specifically stands out. Kyle, letting out a little Cage-rage, grabs Rose from the other side of the table and chokeslams her down to the floor. The scene is tense, but Reed compassionately tries to calm Kyle down. This felt wrong in the wake of everything Reed’s done since waking up, and I thought it did a disservice to the heartless nature of the character. Reed should be egging him on, perhaps giving him pointers on pain or something to that effect that could dramatically make Kyle realize he’s not that person.

I really enjoyed Hideout. It’s suspenseful, ferocious, and aptly directed by Kris Roselli. The film provides you with a good idea of where it’s going immediately but creates a twisty good time in its route to the end.