The Medium is a Thai-Korean film directed by Banjong Pisanthanakun, best known for his 2004 film Shutter (remade in 2008 by 20th Century Fox), with Na Hong-Jin (The Wailing) producing and screenwriting. So already I was expecting great things—I’m happy to report it is, indeed, a really solid and well-made film. I’m not surprised it was declared as the best feature film during the Bucheon International Fantastic Film Festival when it aired this summer.

Told in documentary style, a small crew follows Nim—the titular medium—as she goes about her day in the Isan area of Northern Thailand. Possessed by the spirit of a local deity called Ba Yan, Nim performs rituals and prays for the villagers. We also meet her family: Noi and Manit, her older sister and brother respectively, and Mink, Noi’s early 20-something daughter.

The shaman role is passed down to the women of the family. I’m not sure how, but I assume it’s just whoever the spirit of Ba Yan believes is best for the job. Nim’s sister Noi was next in line—she started having strange symptoms, getting her period for several months straight—but instead of accepting this responsibility, she converted to Christianity. The task was then passed to Nim. 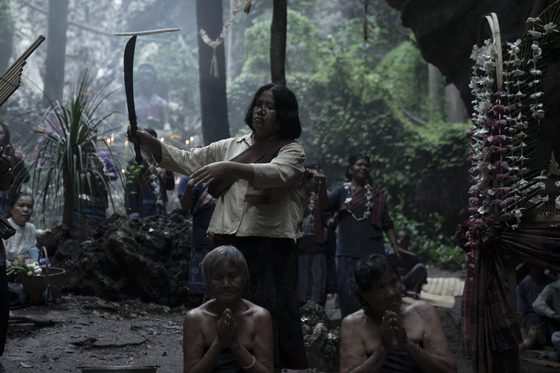 Although Nim mentions her previous goals to become a seamstress (something she still does on a smaller scale at home) she seems happy with her role and how she can help people. I like how the filmmakers ask her what would happen if someone came to her with cancer—could she cure them? No, she laughs. They would probably die. I can only cure supernatural or spiritual ailments. Having spiritualism and modern medicine and technology work together is a cool thing to me.

Noi’s husband passes away, and soon her daughter Mink begins exhibiting strange behaviour, presumed to be Ba Yan choosing her to carry on the shaman role. Nim is immediately suspicious and senses something is off. Things go from bad to worse, and Nim refuses to perform the Acceptance Ritual that Mink would need to become a shaman and will not explain her reasoning. Noi goes to another shaman to have the ritual done, but it clearly doesn’t work. Mink has become violent and unpredictable, even sexually assaulting her uncle at one point.

Consulting with another shaman reveals how badly they’ve bungled this up. “Mink’s condition…is like a car that has the keys left in it. Anyone can drive it anywhere.” Multiple negative spirits have possessed her. Oops.

Noi asks her sister, how do you know Ba Yan is real? Have you ever seen Her? No, Nim says. But I can feel her. I think this would have been a great opportunity for Nim to counter with, how do you know God is real? They could then discuss their differences in religion but how each one is based on faith. That’s essentially what The Medium is about at its core: how we deal with supernatural events based on our beliefs.

The film crew eventually sets up CCTV cameras in Noi’s house, and we’re treated to some creepy extended Paranormal Activity-like shots. (Fair warning, there’s a disturbing animal death during this sequence.) This also breaks up the handheld camera style that the rest of the film uses.

Big props to Mink’s actress for doing a great job with the unnatural, jittery possession movements that have become a staple of horror. If they weren’t so damn effective, we’d stop seeing them!

The ceremony to cure Mink is quite complex, and this adds another interesting layer to the film for me in comparison to a Christian exorcism. Many, many people are involved in Mink’s ceremony. It is a huge collective effort to help this girl vs. a single priest in most Christian exorcism films. The collective efforts of the community to cure one of their own is really touching. It’s a frantic scene involving a ton of elements, making it a tense viewing experience! 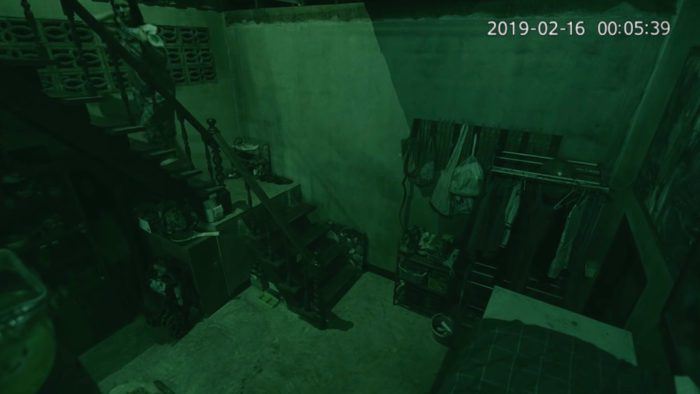 There are very few computer effects—just little things to add detail here and there. It’s carried on the strength of the performances…and a decent amount of fake blood for good measure. No jumpscares or screechy music. It does get a bit goofy and over-the-top near the end for my taste—why are you still filming? And there are other questions it’s sometimes hard to stop yourself from asking, with night vision cameras giving off some big Rec/Quarantine vibes in the process.

With a little over two hours of runtime, it may be a bit long for some. Personally, I love the slow buildup and background this adds to stories (Noroi is one of my favourite films), such as small details fitting into the puzzle later on. You also get more time to get to know and care for the characters. The plot isn’t anything we haven’t seen before, but that’s perfectly okay by me as it’s done well. The Exorcism of Emily Rose is another good example of this kind of possession horror. If you liked The Wailing, then you will enjoy this Na Hong-jin venture as well.

The Medium will be available to stream on Shudder US, Shudder CA, Shudder UKI and Shudder ANZ on October 14th as part of Shudder’s 61 Days of Halloween Lineup.

Looking for more from Shudder? We’ve got you:

“The Columnist Shows Us What Happens When Trolls Go Too Far”

“Superhost Is a Super-Mixed Bag”

“The Ugly Reality of Homewrecker”

“The Reckoning Leads to Courage Where You Least Expect It”