One might say I’m a horror veteran, but there’s nothing that scares me quite so much as a good possession story. Add to that creepy kids with white faces à la The Grudge, and that really increases the nope factor for me. Witchcraft, possession, human sacrifice…May the Devil Take You Too spotlights them all as well—it’s a full-service horror movie.

May the Devil Take You Too (or May the Devil Take You: Chapter Two) is the sequel to 2018’s May the Devil Take You from Indonesian horror director/writer Timo Tjahjanto, who has made a name for himself with ambitious films such as V/H/S 2, The ABCs of Death, and Killers. The first installation follows Alfie (Chelsea Islan) who, when trying to find answers to her father’s mysterious illness, visits his old house and learns that her father had made a pact with the Devil concerning the whole family years before, and now he’s coming to collect. For the sake of transparency, I have not seen the first film, however, May the Devil Take You Too works on its own as a standalone movie. When watching it, I didn’t feel like I was missing anything at all. 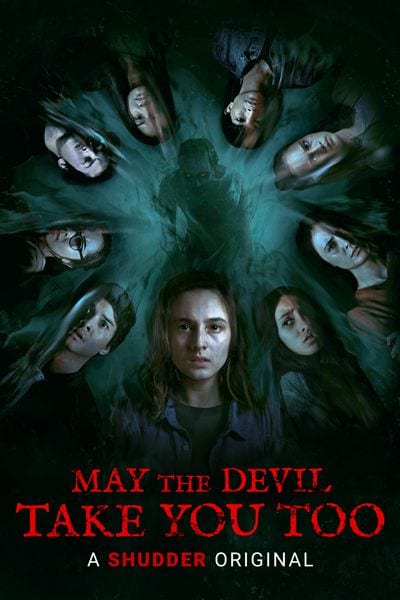 May the Devil Take You Too occurs two years after survivors from the first film, Alfie and Nara (Hadijah Shahab) have moved on with their lives and are living together in an apartment. However, Alfie is plagued by unexplained apparitions and haunted by survivor guilt. This is not one of those “slow burn” possession films. From the opening scene, the movie grabs you and drags you into Alfie’s terrifying world and it doesn’t give up throughout its run time.

Alfie’s newest journey into the depths of terror begins when she is abducted and carried off to an isolated, abandoned orphanage called Rumah Asuh Bahtera and held captive. The ragtag group of kidnappers has learned of Alfie’s abilities and are hoping she will be able to rid them of an evil that has fallen upon them and is cutting them down one by one. This aspect of the film plays on the fears of home invasion and kidnapping, which are often used ideas in some of the best horror films created. 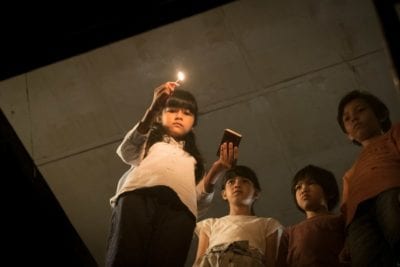 The group of captors is a collection of foster children who were the last orphans at the orphanage in the care of a man named Ayub (Tri Hariono) and his wife. The problem was, his wife was troubled and found peace in the arms of black magic. When the wife passed away, a distraught Ayub became abusive to the children until they finally stood up for themselves by throwing him into the cellar and burning him alive. For this, he is seeking revenge by stealing their souls.

Upon reading the wife’s black magic bible, the group gets the impression that they need Alfie to perform her magic by reading passages from the bible. The idea is that when the reading is complete, Ayub will be banished back to hell and the foster siblings can carry on with their lives happily ever after. The only problem is, as usual, it didn’t work, and after completing the ritual in the orphanage basement, an evil spirit attacks them and begins possessing and picking them off one after the other. As the group is battling their demon foster father, it becomes clear that one of the orphans was possibly romantically involved with the father and is a victim of Stockholm Syndrome. As a result of the relationship, she is complicit in his campaign to further terrorize the group by collecting their souls. 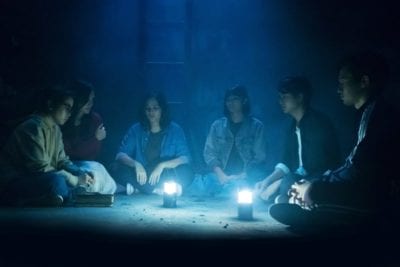 Fans of Asian horror will love this movie as it follows all the usual tropes: creepy upside-down walking people, white-faced kids with wide-open mouths, and people with vacant black eyes. As I said, Asian horror scares the living daylights out of me, so this recipe did the trick. The film’s cinematography adds to the creep factor as it is often so dark it can be difficult to see what is going on. Of course, this aids in the validity of the jump scares. During these scenes, I was often reminded of one of the modern-day classic, Insidious. The film also plays on some anxiety-inducing social issues, such as the idea of becoming an orphan and being sent to live in the company of a family who is not only unkind but terrorizing (and, in this case, downright evil).

And this film has a body count that begins even before the opening credits and keeps going throughout. It boasts some of the most creative and brutal killings ever committed to film all with the classic backdrop of Satanism and witchcraft. The protagonist seems almost impossible to kill as he jumps from body to body, finally landing in his concubine’s frame and becoming flesh in one of the most interesting possession scenes I’ve ever seen.

The film ends with only three survivors and Alfie and Nara escaping Hell once again. However, Tjahjanto leaves the door open for a trilogy as he shows the trio driving off the orphanage property, taking the black Bible with them. That can never be a good thing if you’re looking to rid yourself of evil.

May the Devil Take You Too releases on Shudder on October 29.