I’m a pretty hard person to scare. In fact, I’m usually the guy who laughs when everyone else screams at the scary parts in horror films, and I don’t normally have nightmares or any trouble sleeping afterward even when I watch them alone at night with all the lights off. I grew up watching horror movies the way normal kids watch Disney movies, so I became desensitized to them at a very early age. In fact, I can’t even remember a time when I found horror films scary. I’ve always loved them, and when I was younger, I prided myself on never having been scared by them. But that all changed when I saw Paranormal Activity.

I remember it like it was yesterday. I was in college, and some of my friends wanted to see it. I didn’t think the trailers looked very good, but my buddies convinced me to go to the theater with them anyway. The film started out alright, but it quickly became the most harrowing moviegoing experience of my entire life. I didn’t laugh at any of the scary parts, and while I didn’t have nightmares afterward, I think I might have screamed a bit at the end. I’m not really sure, though, because everyone else in the theater was screaming too.

Now, I know some people don’t get the hype about Paranormal Activity. For example, they look at the scene early in the movie when the door moves a little bit then goes back to its original position, and they yawn because, well, it’s just a door moving—and I totally get it. This movie doesn’t have the horrific imagery that a lot of horror fans are drawn to, and for the most part, the characters are never in any real danger until the very end. It relies mainly on things like loud noises and slamming doors, and I can understand why that doesn’t work for everyone.

But then then there are people like me, people whose spines tingle just thinking about those things. Why does this movie have that effect on us? Why do we find those loud noises and moving doors so scary? I’ve thought a lot about this question, and while I can’t speak for everyone, I can say that for me, the answer is threefold. Paranormal Activity is a perfect storm of three particular elements that come together in just the right way to create the ultimate nightmare fuel, so let’s take a look at those three things and see why I find this film so damn scary. 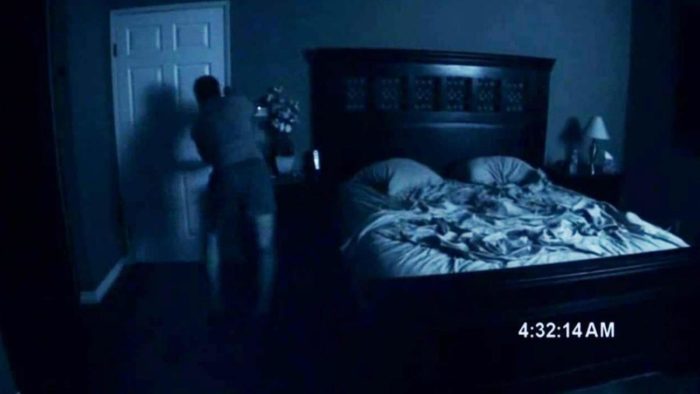 For starters, Paranormal Activity is about an evil spirit, and evil spirits are the only things that really scare me. Other kinds of horror villains, like home invaders, slashers, and monsters, don’t bother me, but ghosts and demons scare the absolute crap out of me. The way I see it, if I’m being attacked by a visible, physical being, I at least have some semblance of a chance against it. I can try to fight back (that might not work too well in real life, but it works in my head), my attacker can trip and hurt themself, or I can outrun them.

But if I’m being attacked by an invisible supernatural entity, then all bets are off. I can’t fight it, it won’t get tired or hurt, and if it’s haunting me rather than my house, I can’t run away. I’d be helpless against it, and that’s the scariest thing I can imagine. Granted, not all ghost and demon movies scare me. In fact, most don’t, so this by itself doesn’t explain why I think Paranormal Activity is the scariest film ever made. It’s just the first step, but it’s the foundation the other two are built on. 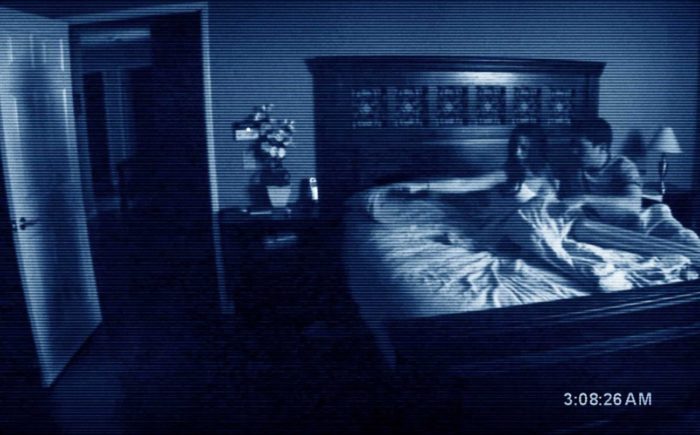 The second step involves all the things non-fans of Paranormal Activity find boring. Like I said before, I totally get why some people might yawn at moving doors and loud noises, but for me, those things hit a horror sweet spot that nothing else can match. See, pretty much all the scares in this movie are exactly the kinds of things I’m afraid are going to happen when I’m alone in my house at night.

Maybe I just watch too many movies, but once the lights go out, a small part of me thinks I might see a door moving by itself or hear a loud, inexplicable noise coming from a dark room at the end of the hall. Granted, I don’t walk around in abject terror thinking those things might really happen, but the thought is always there in the back of my mind. If something like that ever did happen, it would literally be the scariest moment of my life, so naturally, seeing these things in a movie is pretty terrifying for me.

But again, this isn’t the only supernatural horror film that features loud noises and moving doors, and none of those other movies scare me the way this one does. So what is it about Paranormal Activity that does the trick? To answer that question, we need to look at the third and final ingredient that makes this the scariest horror film of all time. 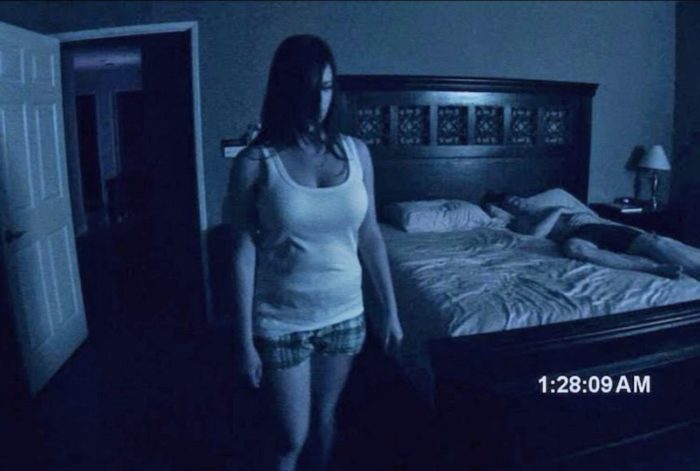 For me, the icing on the cake here is the found footage style. I’m not always a huge fan of it, but it really works for me in Paranormal Activity. It gives me a first-person perspective on the events of the movie, so I feel like I’m there seeing those things actually happen rather than just watching a movie on a screen, especially during the nighttime shots. I feel like I’m actually looking through the lens of Micah’s camera and seeing my biggest fears come true right in front of me, and I can’t imagine anything scarier than that.

Like I said before, I can’t speak for everyone who finds Paranormal Activity terrifying, but those three elements are what makes the movie work so well for me. It’s like the filmmakers took a peek into my soul to find out what scares me, and they just transferred everything they saw onto the screen. Sure, it doesn’t have quite the same effect on me now than it did the first time I saw it, but to this day, it still gives me a slight case of the heebie-jeebies every time I put it on, so for this lifelong horror fan, it’s the scariest movie ever made.