After over a year of “home invasions” in the form of virtual screenings and online events, Grimmfest has now returned to the cinema. Taking place from 7 to 10 October 2021, it’s going to feel as big as ever. Here’s what played on day one, 7 October. 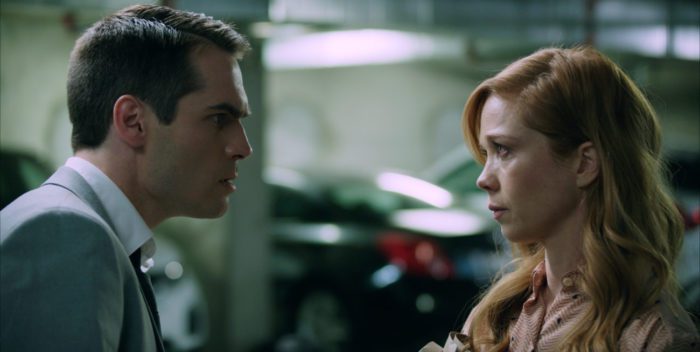 What do you do if you receive an elegant invitation for an anonymous sexual encounter in a plush hotel? It can’t hurt to just pop along, surely? They’ve even supplied the room card. It’s six weeks before his wedding, and this is the quandary that Jordan (Jim Cummings) faces. The little adventure gives him a confidence boost, and from there, I was expecting it to take a similar route to The Special, with a message about addiction, but that’s not the kind of satire we have here. The Beta Test is set in the brash, fast-talking world of Hollywood agents, and this mystery of the purple envelope and its origin is actually a vehicle for commentary about pretense, paranoia, and corporate dick-measuring.

Cummings’ Jordan is both horrible and sympathetic; we feel for his panic at this bottomless rabbit hole yet flinch at the way he talks to people. His little secret tips him into a meltdown, but judging by how precarious his job is and how little he seems to regard his fiancée, a catalyst could have appeared at any moment. I felt like a vulture the whole time, but the film is certainly entertaining to watch. The snag though is that so much effort was clearly put into the blackly comic wit and the writing of the central character that the writing is weak in a couple of other areas, notably, a reveal which was predictable instead of sneaky, and the series of murders that was left hanging. Actually, both of those may make sense if the whole thing is considered from Jordan’s point of view. He doesn’t think of much beyond himself and his own success. 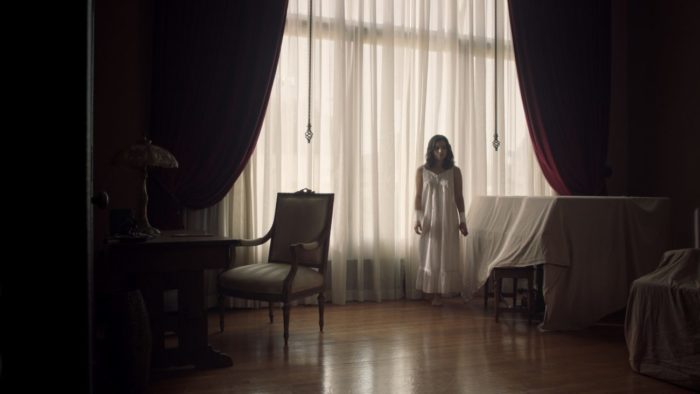 When I found out that The Free Fall was made by one of the people behind The Triangle, I confess that fed some expectations. This one was utterly different, but I loved it just as much. The Free Fall is about a young woman, Sara (Andrea Londo), whose husband is tending to her every need after a double trauma. Her husband Nick (Shawn Ashmore) is kind and loving but doesn’t seem to realise when he crosses the blurry line into over-protective and controlling. The film observes Sara’s confusing attempts to navigate her own recovery in this setting and her growth into assertiveness. It also demonstrates that these can have unknown and unexpected consequences.

The Free Fall is a lush production, an absolute feast for the eyes, amplified by Londo’s classic beauty. The style seems to combine early noir (even with a character obviously modeled on Mrs. Danvers) with seventies giallo: polished sophistication with sudden brutality. Like both of those thriller subgenres, the full picture is not clear until close to the end, and I defy anyone to put the pieces together before the writer (Kent Harper) is ready. The unfolding of Sara’s story is very crafty, and indeed her character is, too. We are led into sympathy for her, even though her strength of will seems to be low. I admit, the last minute or two of the film spoiled it for me slightly, but to be fair, the rest was so strong that I almost forgot about that. And I absolutely applaud what this film has to say about dominant husbands. 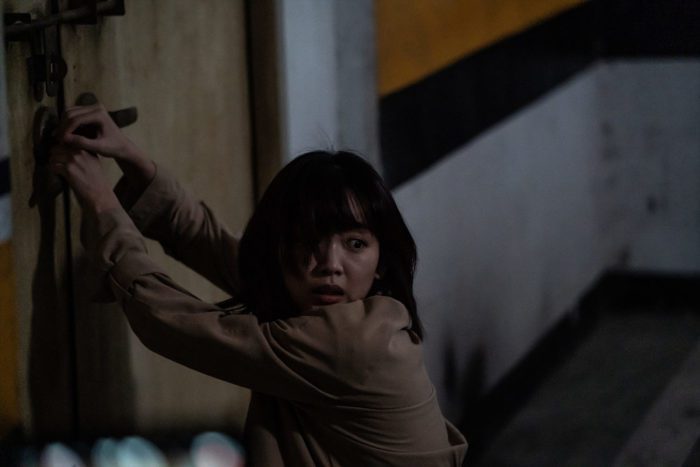 Midnight is a cat-and-mouse thriller, but there is a lot more to it than that. Kyung Mi (Ki-joo Jin) accidentally interrupts a killer (Wi Ha-Joon) on his hunt one night. She doesn’t get a good look at his face, so he turns his attention to her without her knowing. Kyung Mi is deaf, as is her mother (Hae-yeon Kil) who she spends a good deal of time with, though she manages this condition with equal measures of assertiveness and resourcefulness. The killer is young, charming, and quick-thinking, reminding me of the strangers in Funny Games.

There are flaws to Midnight—I won’t deny it. The police are hopeless, and the deaf women are careless at times. But the direction is terrific, giving us an introduction to Kyung Mi’s world first, then showing just how easy it is to be taken in by a smooth stranger. The film is not quite two hours long, neither slow-paced nor action-packed but alternating between them so that there is true tension and suspense. Most impressively, this is Oh-Seung Kwon’s directorial debut, and I was so caught up in the dynamic between the psychopath and his potential victim that I didn’t notice those flaws I mentioned until looking back afterward.

From the director who gave us D is for Dogfight, this film opens with a dogfight, but don’t worry, it isn’t central to the plot. Rather, it is a catalyst to kick off the requisite injuries that require George (Brendan Sexton III) to have his face replaced. He wakes up from the surgery knowing nothing about how he got there, nor indeed anything about who he is. Without a face of his own, he could be anyone.

Faceless presents this traumatic little philosophical issue in the guise of a bloody hospital thriller, and it is mesmerising. Sexton is nothing but sympathetic as he tries to connect with friends and others who can fill in the gaps in his mind, some of which have been filled in with hallucinations and what could be either bizarre flashbacks or waking dreams. And then he meets Sophie (Alex Essoe), and steadily the confusing visions give way to a twisted and brutal film noir. I really, really liked Faceless, even more now I’m reflecting on it. The soundtrack—including classical tunes that I know from other films—messed with me as much as poor George’s “memories” messed with him. If you are prepared for some intense surgical special effects and are happy to be caught up in some poor schmuck’s nightmares, this one could be for you.

As well as all the above, Grimmfest also screened the UK Premiere of AL 3ER DÍA AKA On The 3rd Day (Daniel De la Vega, Argentina) today, which JP Nunez reviewed when it featured at Fantasia.