Life is all about perspective, or so it’s been said. What one sees through their own eyes is processed differently for each, shaped and molded by individual experiences and preferences. Not everyone likes chocolate or pizza, and a treadmill to some is a coat rack to others. Insofar that lives are played out in a variety of manner, so is the cessation of it. Everyone checks out at the end, that’s a given, but the how varies from one soul to another.

Snuffing out the flame of existence is, of course, the most integral component of horror. Getting down to brass tacks and casting aside elements of plot and character development, it’s the brutality that piques the curiosity of us fans and leaves a red stain on our psyche. We didn’t buy a ticket to watch Nancy and her dad argue over about going to sleep; what we really want to see is that fuckin’ Depp kid get sucked into the bed and turned into blood Jell-O.

For the creation of ABCs of Death, 26 directors were given a platform, a little money, and a letter of the alphabet for which they were to construct their own take on death. As the length of each work is quite brief, there’s less time spent on details and more on debauchery. The creators get in, do their dirty, and then get out, representing what we love most about horror films. It’s an innovative experiment that attempts to serve up something to every palate, with a choice few ribeyes interspersed with a whole bunch of potted meat.

A is for Ambitious

Ambitious is precisely what ABCs of Death is—an assemblage of auteurs from around the world presenting their own individual horror shorts, the majority of which clock in at 3-5 minutes runtime. Each was given total autonomy to create whatever they’d like, as long as it dealt with death and was centered on their specific letter of the alphabet. The end result is a compendium of the odd, the bizarre, the humorous, the morbid, and the utterly strange.

The 26 masterminds involved are a sharp bunch—no fresh-from-film-school noobs here. They include some of the most skilled hands working today, with many instantly recognizable to genre fans. Names like Ti West (The House of the Devil), Adam Wingard and Simon Barrett (You’re Next), and horror starlet Angela Bettis (May) are stateside standouts, but this gorefest is of a global affair. Nacho Vigalondo (V/H/S Viral), Noboru Iguchi (Dead Sushi), and Yoshihiro Nishimura (Tokyo Gore Police) impart international flair. It’s worth mentioning that since there are such a large number of foreign flicks, expect to see a lot of subtitles. If reading isn’t your thing, this movie may not be either.

C is for Creative 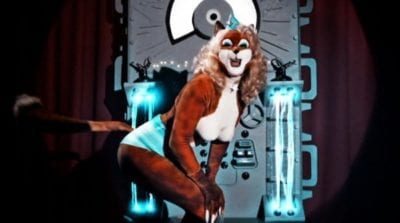 But the ingenuity isn’t limited to the manner of execution. Each film is carried out in the director’s own vision. Anders Morgenthaler plays to his strengths as an animator and comic artist with the letter “K,” a short whose style is relatively reminiscent of the Family Dog cartoon series of the early 90s. “T” is presented in claymation, produced by UK stop-motion artist Lee Hardcastle, who won a contest for the privilege of being included here. (Interesting note: 2015’s fantastic Turbo Kid was initially submitted as an entry for the same letter.) The late Jon Schnepp provides a mash-up of live-action, animation, and CGI for “W,” not surprising for someone revered for their work on Adult Swim’s Metalocalypse and Space Ghost series.

V is for Variety 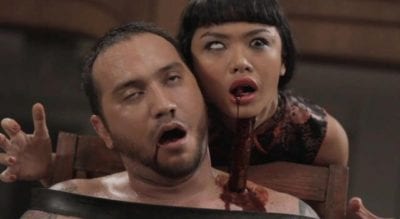 ABCs of Death employs a fun approach to its shorts; each is played before providing the viewer with the title, corresponding letter, and name of the director. It’s a great device that’ll keep you guessing as to what the topic of each is. This is especially fun on letters that could prove to be reasonably challenging, such as “X” and “Q,” something that Adam Wingard and Simon Barrett tackle masterfully with their offering. Clever in design it is, and not a single topic has been spoiled within the course of this article. It’s much more interesting to go in uninformed and try to figure it out on your own!

The architecture of the anthology ensures that there’s something here for everyone, from the splatter fan to the sci-fi enthusiast, with a peppering of the peculiar for good measure. Don’t care for a particular scene? In a matter of moments it’s over, replaced by something perhaps more to your individual liking. Personal favorites include the aforementioned Adam Wingard/Simon Barrett collaboration and Thomas Malling’s furry twist on WWII propaganda pics with the letter “H.”

In believing that there can never be too much gore, my itch for the red stuff is scratched with Jorge Michel Grau’s “I,” something that’ll give new context to this sentence once you’ve watched the movie. Ti West’s film, quite possibly the shortest of the bunch, repulses me as much now as it did when I first viewed it years ago, and Timo Tjahjanto’s “L” instills a gross-out uncomfortableness within me unlike anything I’ve seen before, including Human Centipede 2. And we’re not even going to discuss the letter “F”…

W is for Watch it at Least Once 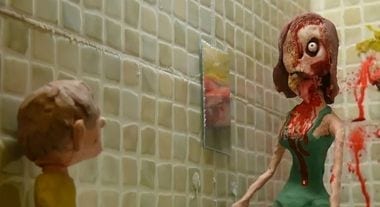 ABCs of Death was released back in 2013, with two sequels following in 2014 and 2016. (The third film, titled ABCs of Death 2.5, featured works based only on the letter “M,” for which there was a contest where the winner would be included in part 2). While only the first movie is currently streaming on Shudder, it’s enough for viewers to determine if the style is something they can get behind. With only a few minutes allotted for each film, there isn’t a whole lot of time for things like character development and narrative. There are subtitles galore, some shorts are entirely devoid of any dialog, and as previously mentioned, there are a few that are just weird for the sake of being weird. Never done before, and sequels notwithstanding, never since, it’s an experiment in horror that sometimes works and sometimes doesn’t. Head over to Shudder and judge for yourself.