Who among us hasn’t longed for a better life? I graduated high school, immediately went to college, and went on to get three master’s degrees. I built a house and moved out of my small town in search of something else, something bigger.

Such was the case of Bella Sorenson who set her sights on greatness from a young age. Bella was born into servitude and worked for one of the wealthy farmer families in town. As sometimes happens, she fell for the farmer’s son and soon was carrying his baby. When he found out, he beat her nearly to death but certainly until she miscarried. Laying on the riverbank at the edge of death, Bella formed a plan to get back at him and to never take any crap from a man again. Thus, begins her life as a murderer.

In The Garden of Spite, she’s not just any murderer—she’s crafty. And she doesn’t do it for fun; she does it because she feels she has to for justice on her terms. In her hometown in Norway, she was mentally abused, bullied, and belittled by both the men in her social circle and her own father…it was beyond time for that to change.

She soon figured out that the world belongs to men and to get ahead, she must get the best of them. She easily manipulates her sister and her sister’s husband into paying for her way to America. Her sister is having a difficult pregnancy and Belle uses that to her advantage. Upon her arrival in Chicago, she is abused, yet again, by a man in her sister’s circle of friends but soon she finds a husband—a moderately wealthy man who gives her just about everything she could desire. But it still isn’t enough. Belle is broken and she will get her revenge on any man who has or will hurt her. She will never go hungry again and she will never be played for a fool.

I don’t think it’s a spoiler to say that Belle is never satisfied with what she has. Once she gets what she wants, she ups the ante and goes for something more. She is lusty and has an uncontrollable anger problem. She is a master manipulator who reaches most of her goals to be wealthy and married with a family—of course, few men that come into her life live to tell the tale. 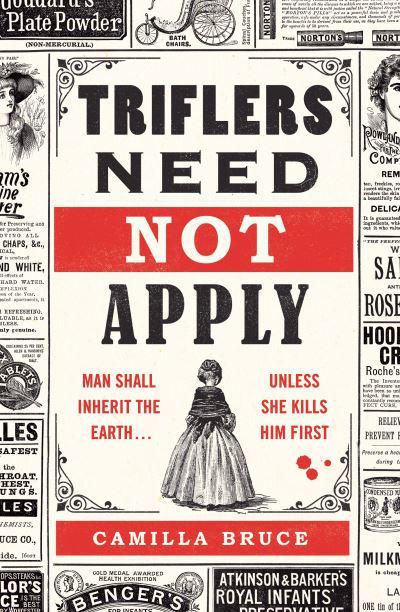 In the Garden of Spite: A Novel of the Black Widow of La Porte (alternate title: Triflers Need Not Apply) is Camilla Bruce’s second novel and is based on the true story of Belle Gunness. For those who aren’t familiar, Belle Gunness was born Brynhild Paulsdatter Storset in November of 1859. She was a Norwegian-American serial killer active in Illinois and Indiana from 1884 to her death in 1908. Her body count was somewhere around 14 people, mostly men, who she enticed to her property in Indiana with the promise of marriage. Some sources believe she could be responsible for as many as 40 deaths. She began with her first husband, Mads Sorenson, and her adopted children with money as a motive.

Gunness is said to have died on April 28, 1908, at the age of 48, but even that is open to speculation. Upon her death, it is said that the doctor who performed the autopsy testified that the body was shorter and lighter than Gunness was reported to be. The body was also presented without a head (no one knows what happened to that piece). It is speculated that she faked her death to possibly avoid prosecution, and she was never brought up on charges for any of her crimes. Her legacy lives on in La Porte County where the Historical Society Museum has a permanent exhibit dedicated to her life and crimes.

This account of her life is an ambitious second novel that is captivating and well written. Upon first sitting down to read it, I was taken with the way in which it was written; Bruce’s style is easy and conversational, unlike most historical fiction. It grabs you and pulls you into the story, and it is easy to forget that this is based on true crime. It is a long thriller, about 482 pages in length, but it doesn’t feel long. I was able to rip through the pages fairly quickly because it was so engaging. Ultimately, I was led to research more on Belle Gunness and the idea of the rare female serial killer.

In some of that research, I read more on Camilla Bruce and how she created the character of Belle Sorenson. In an interview with IndyStar in July 2021, Bruce said, “This idea that a really poor young woman from Norway went out into the world and ended up in Indiana with a yard full of corpses was pretty absurd. I really wanted to see how that could be.

“I actually tried to imagine if I was her and I had grown up around farms and I had been part of slaughter all my life,” Bruce said. “Maybe if you don’t feel that connection or there’s something wrong with your empathy, you don’t see the big difference. Perhaps it’s like it’s flesh.” An interesting take on the serial killer, I would say.

In the Garden of Spite: A Novel of the Black Widow of La Porte was published in January 2021 by Berkeley.

“Death in Her Hands Offers a Different Take On Psychological Horror”