Have you ever made a crucial plan, but only as the time got closer realised that you’d got the wrong day or week in your head? That’s how things first go wrong for Paul Dood: he’s nearly ready for an audition he’s been working hard for when he suddenly discovers it’s taking place today, not next week. A swift replan, and he’d get there just fine, except for all the people who get in the way…The following week, he is moving from shock to anger, and in Paul Dood’s Deadly Lunch Break, everyone gets to find out just how important the audition was to him.

Paul (Tom Meeten, The Ghoul) is the absolute definition of a sweetie: harmless, likable, with more energy than he usually has the chance to show, and he loves his Mum, Julie (June Watson). Paul Dood’s Deadly Lunch Break provides plenty of time to get to know this relationship: Paul is especially dedicated to the talent show because his Mum believes in him, and in return, she is making his costumes. She’s frail though, and there is such authenticity in Watson’s performance that I could have been fooled into thinking this was no actor but a “real” elderly person, like Noni in Sator. The careful establishment of these characters at the start and their dedication to the show Paul wants to have a chance at pays off: we can feel their pain—shared, though different—when all the obstacles pile up against them.

It’s not just random coincidences that conspire against Paul and Julie: it’s people, people who should have been professional, honourable, courteous, and genuine. Granted, these (excuse me) bastards are somewhat two-dimensional compared to the thoroughly human Paul, but they are very wittily written and portrayed with style. When you take a moment to think about Paul’s work colleague and read between some of the sympathetic lines of his (apparently only) friend Clemmie (Katherine Parkinson, The IT Crowd), you realise that he wasn’t just mistreated on this particular day: Paul stands for those unassuming types who are taken advantage of and picked on every day.

I know this doesn’t sound like a horror film, and OK, it isn’t: it’s a really, really black comedy. That said, I’ve submitted my review to Horror Obsessive because I just know that it will suit the taste of horror fans. Have you ever wondered what someone would look like being squished under a tarmac roller? Have you ever wanted to see Johnny Vegas (The Drowning of Arthur Braxton) skewered by a samurai sword? The action gets brutal, but trust me, it stays funny, with some fabulous special effects.

I’ve mentioned a couple of British comedy names already, but Paul Dood’s Deadly Lunch Break is practically riddled with familiar faces, and from other genres too: for example, Steve Oram (Sightseers and A Dark Song), Alice Lowe (Prevenge and again Sightseers), Pippa Haywood (The Brittas Empire) and Craig Parkinson (Line of Duty). How can the film not be adorable and fun as well as painfully biting with these stalwart acts involved? Each of them plays their part with very similar personalities to the ones we’ve seen before, but that’s fine: they are playing types, after all, rather than characters. (Actually, the one key exception here is Vegas’s Rex, the—very Caucasian—proprietor of a Japanese-style tea shop, a role made up of more complexity than he was allowed the time to show.) Then there’s the character of Jack Tapp (Kevin Bishop) who shows just how two-faced and shallow TV talent shows can be.

There’s the tone of this film, I guess, at least by the end: a thoroughly British combination of nasty, endearing, and hilarious. Paul Dood’s Deadly Lunch Break allows you to sit back and roll with the surprising turns, but it also begs you to think about what you’re seeing as well. There’s a particularly apt device of seeing some of Paul’s “adventure” being live-streamed with likes and comments alongside, and you get pulled out of his headspace and reminded of a different perspective, or indeed a range of different perspectives, as there is some wild variation amongst the comments.

Paul Dood’s Deadly Lunch Break was directed by Nick Gillepsie—his second film as a director, after Tank 432, though he is more well-known as a cinematographer, including for Ben Wheatley’s miraculous In The Earth. Gillespie also wrote the film, along with Brook Driver and Matt White, and I really hope to see more from this team, not least because they managed the change of tone so well after the first half-hour—the film equivalent of banging your head against a wall in sympathy for the deeply unlucky Paul. I have immense respect for the way Paul’s character was written because this isn’t someone who revenge comes easily to. He puts on a costume to perform, not a mask to kill. He is still utterly down-to-Earth, even when he loses control of a situation (and then another, and another).

It’s a strangely encouraging film, as well as fun/funny/horrible: it tells us that you don’t have to be the best to be a winner, but you can get there by being yourself and being creative: persevere and use what resources you have. It tells us to give ourselves a chance but to give karma a chance first. 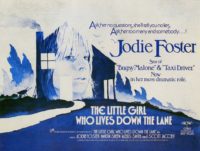