2015 was a great year for horror games with titles like Soma, Bloodborne, and Dying Light, to name a few, and were great in their own way and stood out for various reasons. No game stood out (to me) as much as the insanely thrilling and beautiful Until Dawn. From the expertly written and terrifying story to the A-plus acting, Until Dawn is a triumph in horror and storytelling. Add on top of all of that the star-studded cast and its innovatively fresh game design, you have yourself a damn great game. 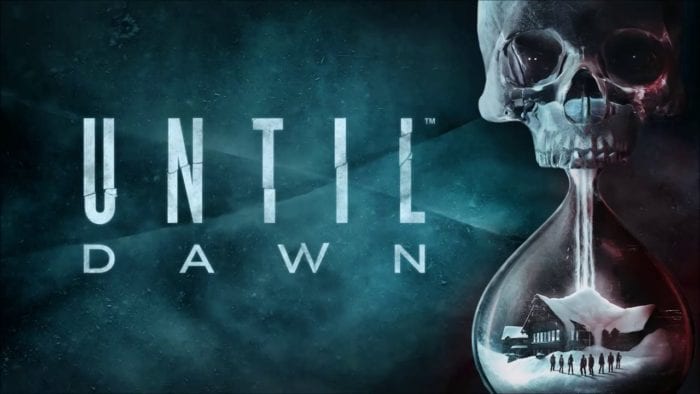 A tiny butterfly flapping its wings today may lead to devastating hurricane weeks from now.

The driving force behind Until Dawn is the use of The Butterfly Effect, driving its multiple storylines and giving players over 250 different outcomes with all the characters dying to all the characters living, and everything in between. While this is not the first game created that lets your choices directly affect the outcome of the game, it is one of the best examples of it. Throughout the gameplay, you can find clues that come in the form of Native American totems and are classified under five categories: Death, Danger, Loss, Fortune, and Guidance. When collecting these totems you are given a tiny glimpse into the future letting the player think about what choices they may have to make in the near future. This is an incredibly fun concept and adds to the layer[s] of fear (pun intended). 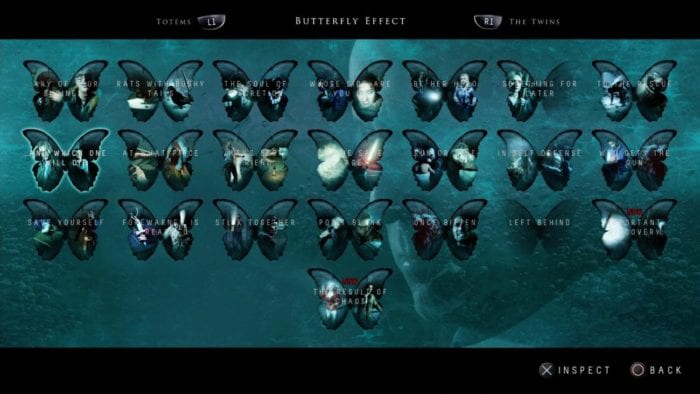 The application of The Butterfly Effect within the game is a great horror element. As the game starts we are given choices that seem fairly inconsequential, and you are given no timeframe to make the decision. It isn’t until you start getting into chases and high-stakes situations when you are faced with quandaries and timed decisions. One of the earliest examples is when Sam (Hayden Panettiere) is being chased by the creepy antagonist of the game, you are forced to chose directions on where to run and hide, leading to a first fiercely tense situation with Butterfly Effect character consequences. 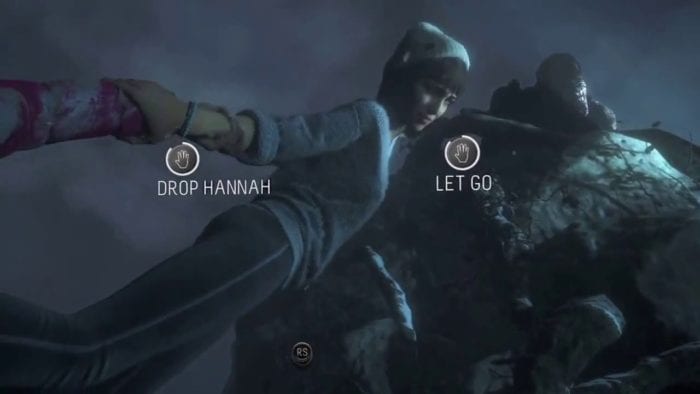 The game plays as if there are three antagonists, a crazed man with a flamethrower (Larry Fessenden), the Masked Man, and Wendigos, but towards the end, we do find out that Flamethrower Guy, which is how he is credited, is actually working with them to eradicate the Wendigos. As the trope goes, once everyone arrives at Josh’s mansion, mostly everyone splits off. Sam goes to take a bath, Mike and Jessica take what seems like a five-mile trek to the guest cabin, Josh seems to go AWOL, and the others just chill. Things quickly go awry as Mike and Jess get chased by a Wendigo, Sam gets chased by the Masked Man, as do Chris and Ashley.

We soon find out that Josh was the Masked Man, after he puts Ashley in a crazy life or death situation, and makes Chris decide who lives and dies. But it was all a joke! Ha-ha. Josh has pretty much gone crazy and wanted to get revenge on his friends for pranking his sister, which leads to her death, by pranking them. 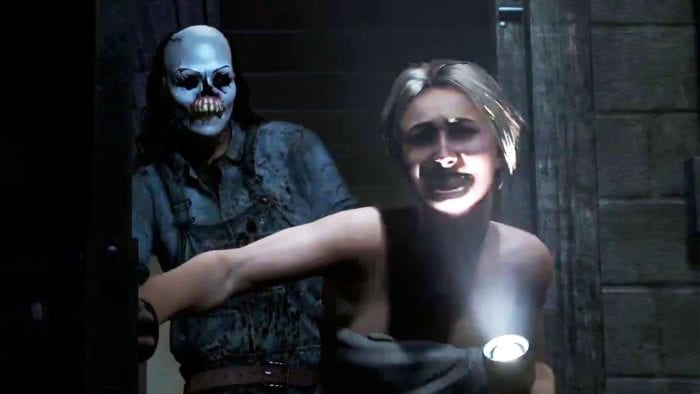 The wraparound narrative of Until Dawn is told through the impeccably acted Dr. Hill (Peter Stormare). Josh is being interviewed by the therapist at the beginning of each chapter, in a room that slowly degrades throughout the game. It’s a really innovative way to give us a look into the psyche of Josh and why he is doing what he does. 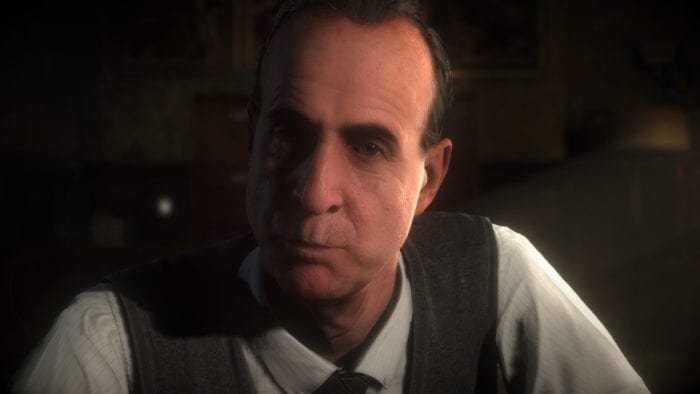 Oh yeah, I didn’t even mention that there is an asylum on the mountain! It doesn’t make tons of sense, but it is atmospheric as hell. We spend a good bit of time galivanting throughout the asylum as Mike when he gets separated from Ashley.

Towards the end of Until Dawn’s 8-ish hour gameplay, everyone (who is still alive) rendezvous back at the mansion for one final insanely tense situation, where the Wendigos have broken into the house and we must make it to the door before we explode the house and defeat the Wendigos.

The Script and Replayability

One of the main things that separate a good game from a great game is its script and replayability. Due to its myriad of endings, Until Dawn is automatically thrown on the pile of games to replay, and with its decent run time it’s fun to have some friends over and replay it again in an afternoon. But even without its multitude of endings, the script for the game is just so damn good. I’ve replayed Until Dawn at least 20 times since I got the game just because I think the script is just fantastic. It was written by horror God Larry Fessenden (Depraved, We Are Still Here, Stake Land) and Graham Reznick (Deadwax, Bushwick). This is honestly one of the greatest scripts for a video game, period. 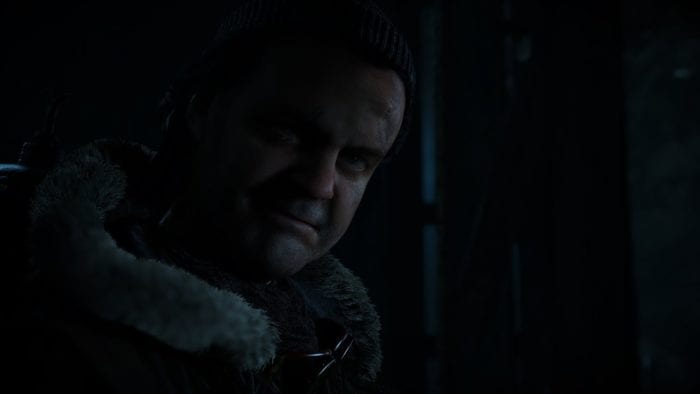 After the success of Until Dawn, Supermassive games set out to create The Dark Pictures Anthology. While not directly related to Until Dawn, the DPA follows the same Butterfly Effect game style. Man of Medan and Little Hope were fairly successful and fun games, but they just don’t have the same punch as their predecessor. A gameplay reveal for the newest DPA game, House of Ashes, was recently released, and it definitely looks badass, so here’s to hoping it gets back to the raw entertainment that Until Dawn provides.

A Touch of Controversy

While I have very few negative things to say about Until Dawn, I would be remiss to discuss a problem within the game, and our genre as a whole. An overarching motif has been vast within the genre for a long time, and that is the use of Native American life, culture, and history as the villain. Films (and the novels they are based on) like The Shining, Pet Semetary, Scalps, and Poltergeist, to name a few, use the trope of the Native American burial ground as a way of explaining the horrors that happen within their runtime/pages. While I am not Native American and I do not want to speak for them, nor is this the proper article for a discussion of this, it is definitely troubling. It paints Native Americans in a certain light of being vengeful spirits and making their rich culture and heritage nearly invisible. Until Dawn incorporates Native American totems and Wendigos into their story, which isn’t as bad as the aforementioned burial ground trope. The way the totems and creatures seem to be handled within Until Dawn feel tactful and less destructive towards the deep-rooted history than how it is usually handled. 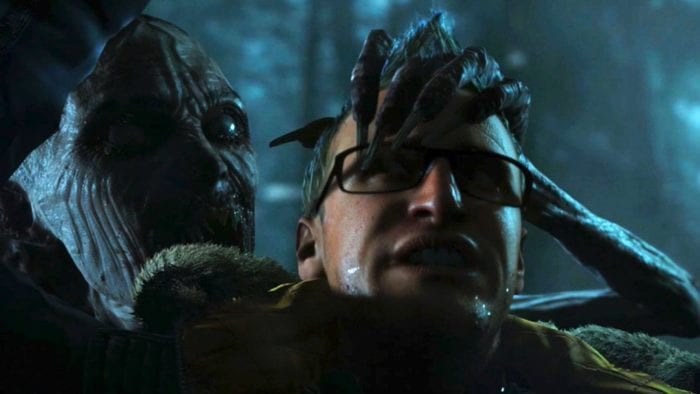 Until Dawn is an all-around amazing game with twists and turns that first-time players won’t see coming, and second/third/twentieth-time players will love just as much as they did the first time. The atmosphere created in the game is tense and truly frightening. If you have not played Until Dawn, it is a definite recommendation from me. If you love horror games and want to play an 8-ish hour-long movie where you make the decisions, then you need to play Until Dawn.

Looking for more horror gaming retrospectives? We’ve got you:

“Does Outlast Still Hold Up After All This Time?”

“Looking Back on The Devil Came Through Here Trilogy”