The recent release of Godzilla vs Kong has once again reignited a seemingly never-ending debate among kaiju fans: do the human characters matter? On the one hand, many people, even several who liked the movie, criticized its human elements, pointing out that some of the characters were completely unnecessary and that the plot had some Godzilla-sized holes in it. They wanted to see deeper, better-crafted characters, and they wished the film had a more intellectually and emotionally engaging plot.

On the other hand, a lot of people enjoyed it simply for the monster action, and they don’t see why such mundane things as character development, narrative coherence, or even the basics of good storytelling matter in a movie about two giant behemoths punching each other. As long as the kaiju spectacle is there, they contend, the human elements are entirely inconsequential, so as far as they’re concerned, the humans are at best a necessary evil. They exist solely to provide a bare minimum of narrative framework, but beyond that, these films should focus on the monsters as much as they can.

So which side is right? Do the humans in kaiju movies matter, or are they little more than cinematic filler? This is a perennially divisive question, and there’s only one way to resolve it. We have to take a deep dive into the issue and look at the arguments on both sides of the debate, and when we do that, we’ll see just how important the human characters really are to their larger-than-life costars.

“Nobody Cares About the Humans”

To begin, let’s take a look at the biggest reason why people often think the human characters in kaiju movies don’t matter. Fans on this side of the debate argue that nobody cares about the puny humans, so filmmakers shouldn’t put much (if any) effort into making them interesting or likable. In fact, they say viewers only care about seeing the monsters smash things, so the less screen time the humans have, the better.

And at first glance, that appears to make sense. The main draw in any kaiju film is the monsters, not the humans, and you’d be hard-pressed to find anybody who saw Godzilla vs Kong for any characters other than Godzilla and King Kong. That much is 100% true, so the premise of the argument is pretty solid. But when you try to jump from that premise to the conclusion, the logic begins to fall apart.

Think about a great supernatural horror movie like The Conjuring. When it came out back in 2013, did anybody go see it for Ed and Lorraine Warren? Sure, there were probably some paranormal fanatics who did, but the vast majority of viewers had never heard of them before. We went into the film looking for great scares, not great characters, but we ended up getting both. Audiences were scared silly by that film, but we also fell in love with the people in the story. In fact, fans ended up loving the Warrens so much that they’ve since become the biggest selling point of the entire franchise, and we were delighted to see them pop up for a bit in Annabelle Comes Home.

That alone is enough to show that the “nobody cares about them” argument isn’t a good reason to skimp on the humans, but there’s also another, equally important counter-argument: audiences don’t care about the humans because we simply haven’t gotten many worth caring about in recent kaiju films. Think about it—when was the last time you saw a giant monster movie with really good human characters and a really good human story? Sure, we got Shin Godzilla a few years ago, but that’s only one movie, and most Western fans haven’t seen it. The vast majority of us are only familiar with the big Hollywood films like Pacific Rim, Rampage, and the MonsterVerse movies, and those are all very much style over substance.

The truth is that modern American kaiju films have conditioned audiences to be content with mere spectacle, so the majority of fans don’t even realize there’s a better way. We don’t care about the humans in these films because most of us don’t even know that good human characters can enhance these stories without taking away from the monster action. But what if we saw kaiju films that also featured great characters and great stories? Would we change our minds then? I think most people who make the “nobody cares” argument would, so to really seal the deal, let’s turn now to some classic giant monster movies that find a way to combine great human characters with great kaiju action.

Humans We Care About

There’s no shortage of classic kaiju films we could talk about here, but there are two that stand head and shoulders above the rest: King Kong (1933) and Godzilla (1954). Not only do these movies have great monster action, but they also tell gripping stories with great characters you actually care about, and those excellent human elements are what elevates them to the top of the kaiju heap.

Let’s start with King Kong. While it’s probably best known as a riveting adventure with (at the time) groundbreaking special effects, that’s just the tip of the iceberg. This is actually a really deep story as well. From the opening scene, the men are all pretty misogynistic, and none more so than Jack Driscoll, a rugged sailor who doesn’t think women belong anywhere near him. However, as the story goes on, he softens up and falls in love with Ann Darrow, becoming a much better man than he ever was before.

He risks life and limb to save her multiple times, and he transforms from a sexist jerk into a true hero. The story shows the power of love and the dignity of women, and through it all, you come to truly care about Jack, Ann, and everybody else in the film. The characters and story are just as enthralling as the kaiju action, so you never find yourself wanting to fast-forward through the human drama to get to the “good stuff.” It’s just about a perfect blend of humans and giant monsters, and it’s never been equaled in the past ninety years.

If we jump ahead about two decades, we come to the only movie that even comes close to King Kong in the pantheon of kaiju classics: the original Godzilla (the Japanese version, not the butchered American version, Godzilla: King of the Monsters). It’s that good, and a large part of the reason is that Godzilla’s destruction of Tokyo isn’t just great kaiju fun. It also has a strong emotional impact. The film makes you really care about its human characters, so you feel their pain when their home is reduced to rubble. You want their lives to be restored and brought back to normal, and you very much sympathize with their anguished search for a way to defeat the prehistoric beast.

In particular, there’s a scene towards the end of the film that really encapsulates everything that makes it soar above its cinematic peers. After Godzilla utterly destroys Tokyo, Emiko and Ogata try to convince Dr. Serizawa to use his newly invented oxygen destroyer against the monster, but he’s initially hesitant because he’s afraid of what would happen if the weapon fell into the wrong hands. Then, in the middle of their skirmish, the TV suddenly shows a bunch of children singing a prayer for peace in the nation, and it’s absolutely heartbreaking. It gives you a great sense of just how tragic the situation really is, and it’s almost enough to make you feel bad for enjoying the giant monster destruction that came before it.

It’s a masterful scene, and the rest of the movie is just as good. It’s another nearly perfect blend of kaiju action and human drama, and along with King Kong, it shows that fans can and will care about the humans in giant monster movies if they’re done well. 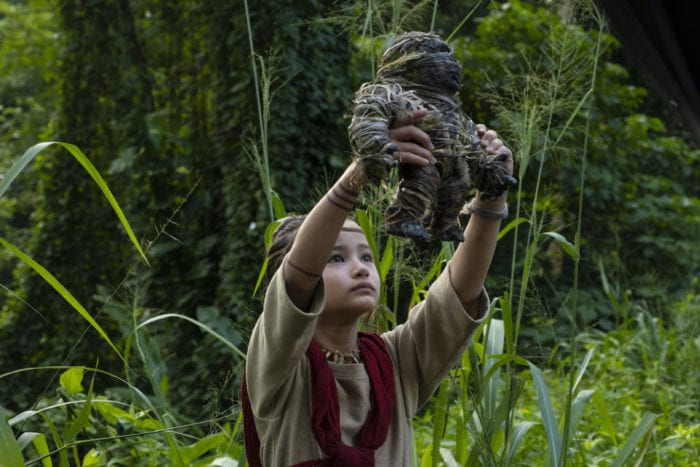 When all is said and done, it’s pretty clear that the humans in kaiju movies do in fact matter. Granted, they’ll never be the main draw of these films, but that doesn’t mean fans will never come to love them. As the genre’s most influential classics show, it is possible to make giant monster movies with likable characters and gripping stories, so we can rightly criticize these films when they skimp on the humans, and we have every right to want them to be better.

To be clear, I’m not saying that I dislike the style-over-substance kaiju films we’ve been getting in recent years. I love them just as much as anybody else, but that doesn’t mean I want every giant monster movie to be like them. Variety is the spice of life, and movies are no exception. Hollywood studios like Legendary have shown time and time again that they can do great monsters, and now it’s time for them to step up their game and begin combining those monsters with great stories and great characters. The makers of these films need to recognize that the humans do matter, so if they put in the effort to make good all-around movies rather than just bare-minimum narrative frameworks to showcase some great CGI, the results will be better than most fans have ever dreamed a kaiju film could be.