When Kong: Skull Island came out back in 2017, it was commended mainly for its special effects, and understandably so. This is one of the most beautiful kaiju movies I’ve ever seen. The flora and fauna of Skull Island look amazing, and Kong’s fights against both the humans and his fellow monsters are some of the best the subgenre has to offer.

But that’s not the only great thing about this film. Kong: Skull Island also manages to strike a perfect balance between honoring the giant ape’s legacy and telling its own unique story. Too many of Kong’s previous movies have just repeated the same clichés we’ve seen a million times before, but this one takes a different approach. It reshapes and reworks those tropes in ways that are refreshing yet familiar, so while it’s not the traditional King Kong story, it still remains completely true to the character.

It’s a real treat for fans, and it shows that the filmmakers behind this movie have just as much love for Kong as we do. So without further ado, let’s take a look at four of the best ways this film creatively honors the legacy of one of the founding fathers of the kaiju subgenre.

1) Kong vs The Helicopters 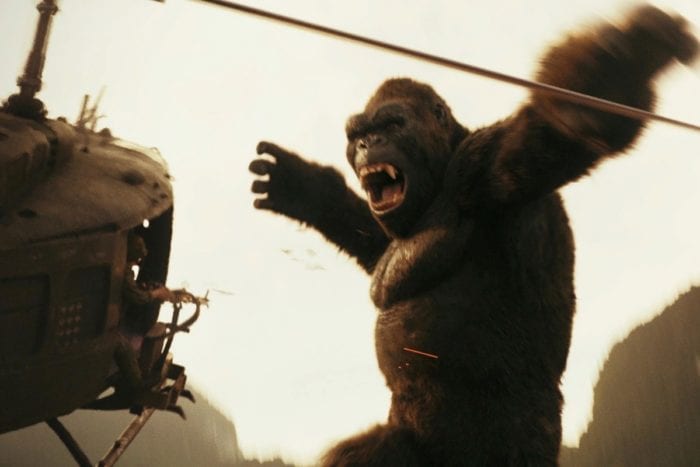 When you think of King Kong, what’s the first thing that comes to mind? For many, it’s probably the image of him climbing the Empire State Building and being killed by military airplanes. That’s one of the most iconic scenes in cinematic history, and it’s arguably the most indelible mark that his original film has left on our culture’s collective consciousness. So when Legendary decided to reboot the character with Kong: Skull Island, it was only natural that they would pay tribute to this classic scene in a big way.

It begins when the main characters and their military escort first arrive on the island and they split up to drop seismic explosives. The sequence has a really fun and lighthearted tone, but that all changes when a flying tree comes out of nowhere and hits one of the helicopters carrying the bombs.

The tree was thrown by Kong, and when he proceeds to attack the other choppers, they let loose on him with their machine guns. It turns into an all-out brawl, but unlike in the original film, Kong wins this fight. The military’s puny weapons prove to be no match for the giant ape, and if you know the original story, this scene is a clear callback with a clear message.

It purposely calls to mind the finale of the original movie, and it shows us that this isn’t the same Kong we’ve seen before. Far from being done in by early twentieth-century military planes, this version of the creature destroys a whole fleet of 1970s helicopters with machine guns, and he barely breaks a sweat doing it. He’s much more formidable than the original iteration, so in a world populated by behemoths like Godzilla and Ghidorah, you know Kong is going to be able to hold his own and show that he’s more than worthy of the title “king.”

2) The Other Creatures on Skull Island

Hands down the best thing about Skull Island in previous iterations is the diversity of ancient, weird, and often giant creatures lurking in every hole and around every corner. Evolution went in a completely different direction there, so it’s inhabited by some amazing animals you can’t find anywhere else.

For instance, in the original film, Kong shares the island with dinosaurs like T-Rexes and stegosauruses, and in Peter Jackson’s remake, it’s also home to a bunch of huge insects and spiders. This is a core element of the King Kong mythology, and Kong: Skull Island honors it in a really cool way.

As the characters in this movie explore the island, they also run into a bunch of strange and unexpected animals, but the film doesn’t just recycle the same monsters we’ve seen before. Rather, it creates entirely new ones, like a weird sort of water buffalo and the evil skull crawlers that live below the surface, and they’re just as amazing as the creatures from previous Kong films.

In this way, Kong: Skull Island continues the tradition of making Skull Island just about the coolest place on earth. It’s a land that time forgot, and it’s absolutely stunning. Some of the most gorgeous shots of the movie involve the animals that Kong shares his home with, and that’s a fitting tribute to this magical place of wonder and awe.

When Kong climbed the Empire State building in his original film, he didn’t do it alone. He was carrying Anne Darrow, the woman he fell in love with on Skull Island, and every subsequent iteration of the giant ape has followed suit. He falls in love with a girl and carries her up a tall building in both of the remakes as well as both of Toho’s Japanese Kong films, and to be honest, I’ve gotten kind of tired of it. It’s played out, so going into Kong: Skull Island, I really hoped they would ditch that cliché and do something different.

Thankfully, I was not disappointed. Kong doesn’t have a love interest or climb any tall buildings in this movie, but the story still finds a way to pay tribute to that trope in a clever and satisfying way. The big guy forges a special bond with the antiwar photographer Mason Weaver, and there are two scenes in particular where this connection really stands out.

The first one comes when Kong encounters Mason and Captain Conrad traveling alone at night. The humans are up on a cliff, and Kong is standing on the ground below, so they can see eye to eye. Mason walks right up to him and touches his face, and he just stands there and lets her do it. This is a really cool moment, and it creates a bond that will become even more explicit at the end of the film.

Later on, when Kong fights the big skull crawler in the movie’s final battle, his relationship with Mason comes to the fore once again. During the course of the fight, he throws the creature into the cliff Mason was standing on, and she falls into the water. Kong notices this, and he goes out of his way to save her from drowning and place her on dry land. This shows that the previous scene wasn’t just a fluke or a one-off. Even though Kong isn’t in love with Mason, he does care about her, and he’s even willing to momentarily disregard his own safety to ensure hers.

This is very different from the romantic connection we get in every other King Kong movie, and I really appreciated it. It’s a creative twist on arguably the most famous trope involving the giant ape, as it clearly pays homage to his previous love interests without just repeating the same ideas we’ve seen a million times before.

4) Kong vs the Big Skull Crawler 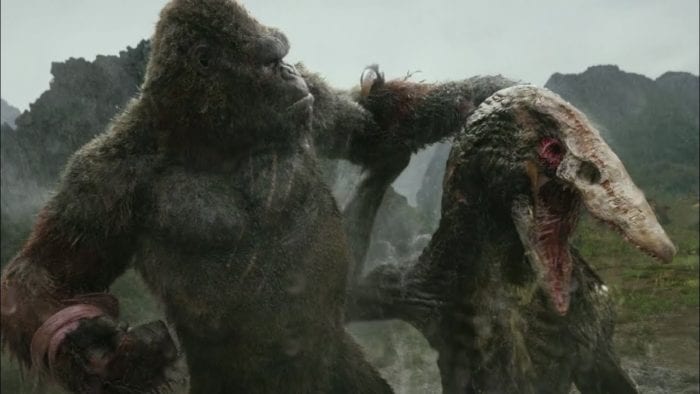 When you sit down to watch a kaiju movie, what’s the one thing you want to see above all else? For most of us, it’s monsters fighting other monsters. Sure, watching an unstoppable giant destroy a city is always a good time, but I think it’s fair to say that kaiju fights are the most fun this subgenre has to offer.

And in that regard, King Kong does not disappoint. Throughout his history, he’s had some awesome fights with other monsters, and some of his best and most famous rumbles have taken place on his homeland of Skull Island. For instance, in the original film, he famously fights a T-Rex, and in Peter Jackson’s remake he takes on three T-Rexes at once. These Skull Island fights are an essential part of Kong’s cinematic DNA, so of course, Kong: Skull Island follows suit and pits the big guy against some of his fellow island monsters.

And it’s fantastic. At the end of the movie, Kong faces off against his arch-nemesis, the biggest and nastiest skull crawler around. This is hands down the best part of the film, and I’d even go so far as to say that it’s one of the best kaiju fights I’ve ever seen. It’s an amazing back-and-forth battle that would make Willis O’Brien (the stop motion animator for the original King Kong) more than proud, so it’s a worthy addition to Kong’s legacy of great kaiju fights on Skull Island.

A Tribute to King Kong

When we put this all together, it becomes clear that Kong: Skull Island is more than just a special effects bonanza. Sure, the amazing visuals are the first thing that jumps out at you, but if you dig a bit deeper, you’ll see that there’s much more to it than just that. It’s also a loving and creative tribute to one of the greatest movie monsters of all time. It reimagines Kong’s story in a way that’s faithful yet new, so if you’re a fan of King Kong, this film is essential viewing.