For a movie series that has featured vulgarities from a 12-year-old girl, James Earl Jones in a Bee costume, and old people crawling on ceilings, a prequel to The Exorcist seems like a jarring record scratch. Beyond the actual idea itself, that’s tantamount to raising a curious eyebrow about Rick Blaine’s pre-Casablanca days: the original 1973 film does not have much material to mine for an Exorcist prequel.

You could interpret Father Merrin’s encounter with the demon in The Exorcist as a reacquaintance between the two, particularly with the priest’s surname being loudly screamed in the MacNeil residence or the character’s slight pause when uncovering an idol in the film’s opening sequence. However, this is heavily reading between the lines. The film’s other aspects (such as some lip service to Merrin’s prior exorcism and the haunting staredown between the good father and the Pazuzu statue) don’t coalesce to form the north star that points to a narrative for a prequel film. 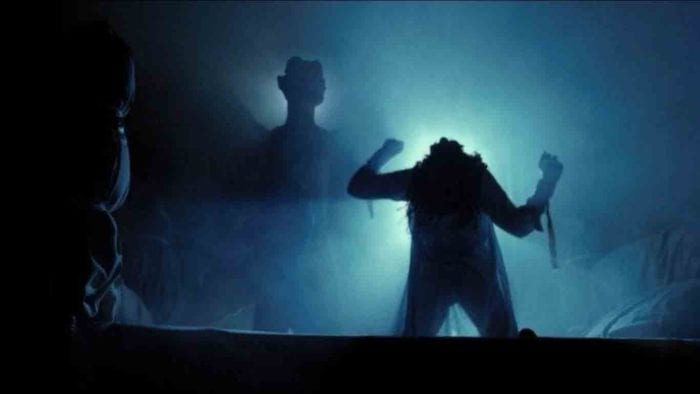 Although, much like waiting for a British bus, you wait around for one Exorcist prequel, and two come along at once. The reason for this is that Morgan Creek Productions decided to shelf Paul Schrader’s film, due to a lack of faith over its commercial success because of a lack of horror or scares. They subsequently decided to remake the film, replacing Schrader with Renny Harlin, hiring new screenwriters, and using some existing elements of the production. Harlin’s film was a box office and critical failure. Consequently, the studio decided to give money to Schrader to finish his version.

On the surface, both films have a few things in common, including the central actor (Stellan Skarsgård), cinematographer (Vittorio Storaro), and some of the supporting cast. Despite these similarities, the films vastly differ in their approach. In fact, it feels as though they both watched The Exorcist and formed their approaches on particular aspects that fueled the original picture. 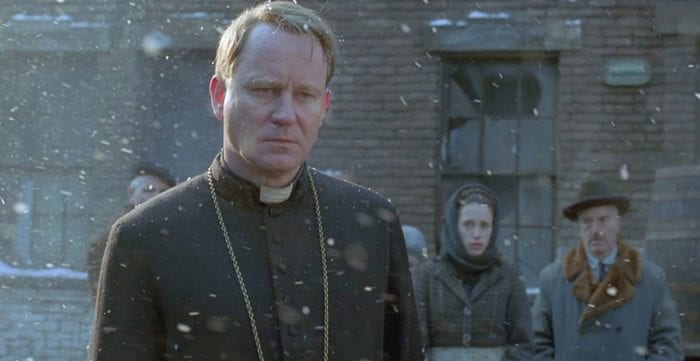 The first prequel—Dominion: Prequel to the Exorcist (2005)—seems as though it watched the 1973 film and was quite beguiled by its opening sequence and underhanded elements. The film is about a lapsed Lankaster Merrin, who lost his faith after a harrowing encounter with the Nazis in World War II. After finding one of their soldiers dead, a Nazi officer forces Merrin to choose and sacrifice ten innocent people to die (otherwise the entire flock of gathered villagers will instantly be killed by the surrounding soldiers).

In a post-war world, Merrin is an archaeologist in the Turkana region of British Kenya. His recent dig is a buried church that was built around 5th century BC, during the height of the  Byzantine empire. He is joined alongside Father Francis (Gabriel Mann) who hopes to impart Christianity to the remote place. Looming in the background is Major Granville (Julian Wadham), who represents the British Empire’s military might in the area. Along the way, Merrin meets a local doctor—Rachel (Clara Bellar), who remains troubled by her experiences in a concentration camp, and a mute boy—Cheche (Billy Crawford), who becomes intertwined with Merrin’s faith.

Schrader’s film is a commendable vintage affair, existing as a missing link between an Ingmar Bergman chamber piece, and a sweeping David Lean-esque epic. At the same time, it also captures the indelible sense of documentary realism that permeated William Friedkin’s 1973 film. Moments such as the characters stumbling upon a Turkana ritual involving a bull match the immediacy of Max Von Sydow’s Merrin walking through a real-life dig in the opening of The Exorcist. Storaro’s cinematography is also noteworthy, particularly the lighting, with natural light present in many scenes to give a sense of place.

Likewise, Skarsgård’s central performance embodies the film’s delicate dance between fidelity to Friedkin’s film and a classical Hollywood spirit. Like Von Sydow’s performance, Skarsgård’s best moments are the ones in silent introspection, where the entire gamut of facial expressions, from despair to faithlessness are on full display. There’s also an inherent spikiness that underpins the performance. This is a quality that’s found in various John Wayne performances and Gunnar Björnstrand’s reflective performance in Bergman’s Winter Light. 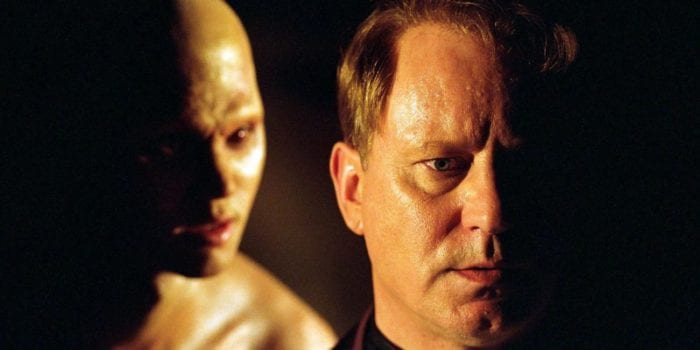 Despite being more of a cinematic ode to the work of Bergman and vintage epics, Dominion does capture the more subtle aspects of The Exorcist. It fundamentally understands the film’s embrace of the eerie sense of coincidence, and the looming forces that possibly play a pivotal part in the events of the film.

This element comes in the form of the plot point where Major Granville shoots one of the Turkana (after thinking one of them killed two of the British soldiers in a grisly way). It becomes a distressing echo of Merrin’s encounter with the Nazi officer and evokes the importance and cosmic irony of the famous steps in the first film.

On the other side of the coin, the second prequel film, Exorcist: The Beginning (2004), feels as though it watched the original film and was inspired by its boundary-pushing scenes involving a possessed Regan. While the skeleton of the narrative from Schrader’s film remains largely intact, there are prominent changes. This comes with a shift in emphasis for some of the supporting cast and events.

The local doctor Rachel (now renamed Sarah and played by Izabella Scorupco) is brought more to the forefront in terms of focus and importance to the narrative. Meanwhile, Father Francis (now played by James D’arcy) is scaled back in terms of importance and purpose insofar as his goal to introduce Christianity to the region is concerned.

Merrin is also a lot warmer. Skarsgård channels Indiana Jones and Rick O’Connell from The Mummy to illustrate someone who is settled and physically capable in their occupation. Merrin’s encounter with the Nazi officer is revealed in a piecemeal manner via flashbacks evoked by current-day events, as opposed to the opening of the film in Dominion. But the biggest plot change is a swap between the possessed victim. 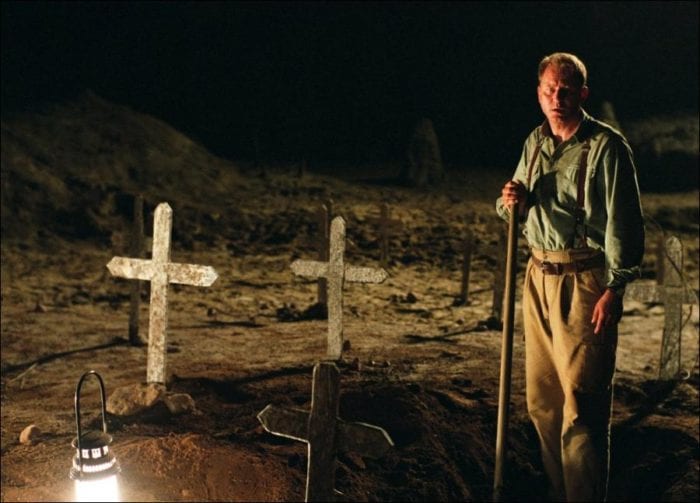 Quite simply, Exorcist: The Beginning is an indulgent and sugary ice cream sundae of a horror movie. It feels the need to bold, underline, and italicize that it’s a scary movie. There’s not a ten-minute stretch that goes by without some horrific and over-prolonged sequence to shake up the audience. This aspect even extends to the screenplay that bludgeons the audience senselessly with its attempts to be frightening. For example, it’s not just a church that Merrin uncovers, but it’s the exact spot where Lucifer fell and was subsequently covered up by the Church, in a conspiracy that Father Francis knows about.

This aspect also extends to the filmmaking that flickers between interesting to annoying. The first instance of the present awakening Merrin’s memory of the encounter he had with the Nazi officer is good, insofar as paralleling the British Army with the Nazi soldiers in the war (via the sound of marching footsteps).

However, all subsequent instances fail to engage on this same level, often feeling like an awkward patchwork of the present speaking to the past. But Harlin’s unsubtle tendencies come to the fore in the opening sequence that has a large panning shot of many crucifixes. The choice is akin to saying a word so much that it loses its value and meaning.

In nearly any other horror picture, you would get some enjoyment from this brazen approach. Indeed, the Hammer horror films built their appeal on how overt they were in their violence, gore, and sexuality. And even Renny Harlin’s previous effort in the genre, A Nightmare On Elm Street 4: The Dream Master, has this quality.

This style of horror moviemaking is incongruous with a film that is grappling (in a limited way) with issues such as lapsed faith, Holocaust survival, and colonial occupation. In many ways, it feels as though Harlin is making a send-up, but some of the writing and acting don’t back up this notion. So, you have this fundamental tug of war between the serious issues that are swept under the carpet and the horror sequences.

For the lack of scares in Dominion, it was at least going for something interesting, positing that human evil is as worse (if not more so) than the demonic evil we saw in the original film. The Beginning instead puts on lipstick and blings out its evil like it’s a bawdy and talentless Marilyn Manson knockoff.

More From: The Exorcist