Even though it’s only February, 2021 is already shaping up to be another really good year for horror. With movies like The Night, Sacrifice, Saint Maud, and The Vigil, it almost feels like we can start preparing our top ten lists already. When I sat down to watch The Pond, I had high hopes that it would continue this trend. The trailer had some really cool imagery and promised an intriguing mystery, so I felt pretty optimistic going into it.

The Pond is a folk horror film directed by Petar Pasic, and it stars Marco Canadea, Leslie Kunz, and Paul Leonard Murray. It came out on February 23 via VOD, and it’s about an anthropologist who lost his university post and continues his research in a seemingly isolated rural town by a pond. In the course of his work, he comes upon a seemingly apocalyptic discovery, and he soon begins to lose his grip on reality as he descends into utter madness.

This movie is a pretty slow burn, and for the entire first half, it just sets up the characters and the story without giving you much real horror. All you get are a few hints here and there that something is amiss, but you have no idea what’s actually going on. For example, you catch a few glimpses of some mysterious patterns in the anthropologist’s research, and his daughter claims to see a scary monster from time to time.

It’s a compelling idea with a lot of potential, but unfortunately, the execution in this first half doesn’t do it justice. While the few moments of horror are done well and the mystery is intriguing, the characters are just a real chore to watch. A lot of the acting is pretty bad, and even when it’s not terrible, the characters are almost all flat and underdeveloped.

For instance, there are two young sisters who play by the pond a lot, but you never actually learn anything about them. You don’t know who their parents are, where they live, or what they do when they’re not playing. On top of that, there’s also a random angry guy who shows up every now and then without playing any real role in the story, and there’s another character who just comes around to play chess with the anthropologist a few times.

These characters are defined pretty much entirely by the one or two things they do over and over again, and they’re not really developed beyond that. They feel more like generic archetypes than real people, and pretty much everybody else in the movie is like that, too. They’re tough to care about, so they make it tough for viewers to get into the story.

Then, at about the halfway point, The Pond takes an unexpected turn for the better. Something strange happens to the main character while he’s working on his research, and all of a sudden, the movie becomes really atmospheric and eerie. It starts to lean into the horror a lot more, and you get a bunch of the cool imagery that the trailer hinted at. It looks like the rest of the movie might make up for the poor first half, and for about five or ten minutes, I was really liking it.

But then the film goes downhill all over again. The second half is definitely better than the first, but it still has some major problems. After the big turning point, the movie continues to give you more cool imagery and a lot of creepy, atmospheric moments right up until the final shot, but it doesn’t work as a coherent narrative. The story just becomes really confusing, and I was never able to figure out the point of it all.

In particular, a lot of the creepy imagery feels disconnected from the story, and the characters often do things that don’t make any sense. To take just one example, there’s a scene where the two sisters put paper bags over their heads as they play together, and while it looks creepy, I had no idea why they were doing it. It almost felt like the director just thought it looked cool, so he put it in the movie without thinking about how (or even whether) it fit into the overall plot.

And the rest of the second half is like that too. Sure, a lot of it looks really cool, but it’s all style and no real narrative substance. It feels like the movie isn’t so much telling a story as it is just throwing a bunch of vaguely connected scenes at you, so it’s tough to know what’s actually going on.

Then, in the final scene, The Pond tries to wrap up the story and explain what it was all about, but I found its explanation entirely incomprehensible. Maybe it was alluding to some mythology that I’m not familiar with, but the ending just made absolutely zero sense to me and left me more confused than I was before. I even watched the movie a second time the next day hoping to find some clues that I had missed on my first watch, but it made as little sense to me the second time as it did the first.

So all in all, I’m sad to say that The Pond does not keep the 2021 ball of good horror movies rolling. While it has a lot of really creepy and fascinating imagery along with a bunch of eerily atmospheric scenes, those good points are far outweighed by the bad. It’s plagued by poor acting and unlikeable characters throughout, and then it devolves into incoherence in the second half. It’s the cinematic equivalent of a nice-looking car with no engine, so if you’re looking for some good new horror to watch, I have to recommend that you skip this one and look elsewhere. 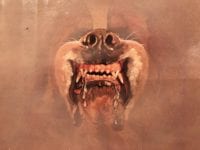