Carmilla, written by Joseph Sheridan Le Fanu, is one of vampire fiction’s earliest tales and predates Dracula by almost thirty years. Along with a poem written by Heinrich August Ossenfelder—which tells of a vampire threatening to drink the blood of a pious maiden and corrupt her views of Christianity—Carmilla was one of the first of its kind to introduce the concept of erotism around vampires, however problematic, and explore the bond that develops between the alluring creatures of the night and the victims they feast upon.

The story follows a young girl, Laura, who encounters the mysterious and captivating Carmilla after a carriage accident brings Carmilla to Laura’s house where she’s nursed back to health. Carmilla becomes obsessed with Laura and begins drinking the girl’s blood, causing her to waste away and alerting the suspicious household to Carmilla’s vampiric nature. It doesn’t take long before they learn of the recent deaths of young girls connected to their unholy guest and discover Carmilla’s real identity. The 1872 gothic novella, which challenged the restrictive emotional discipline and perceived inferiority forced on Victorian women, weaved a subtle tale of lesbianism and duality that served as a critique of Christianity’s most outlandish superstitions. 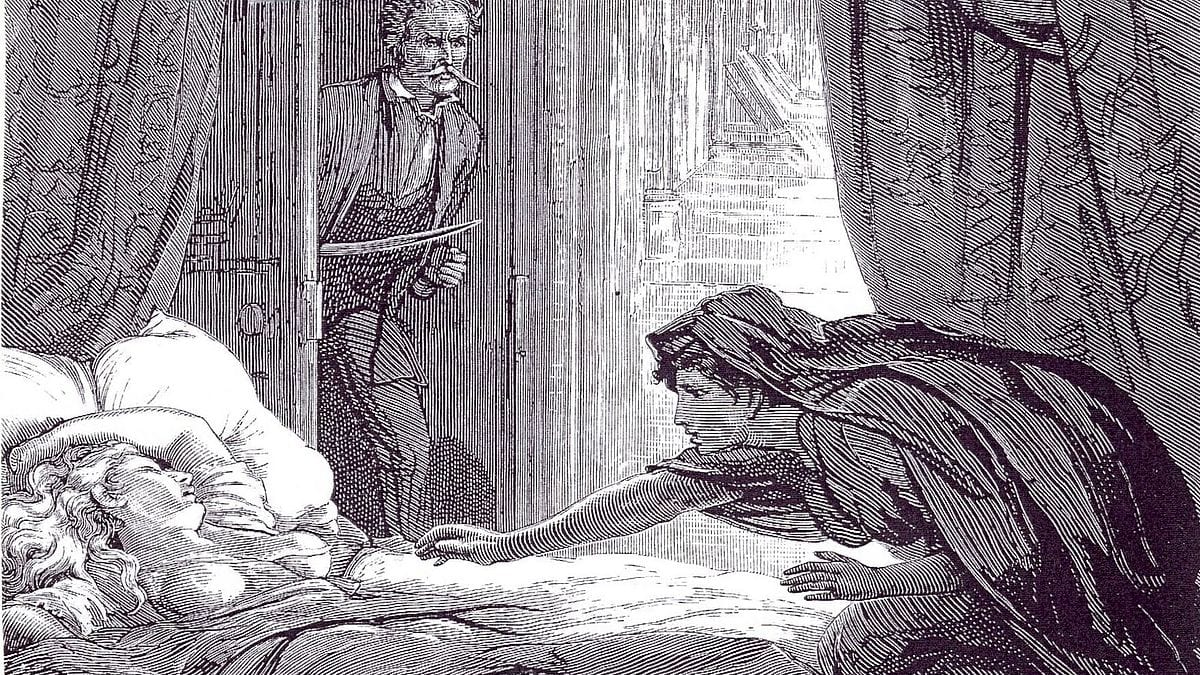 Despite holding a place in vampire fiction longer than the infamous Count himself and setting a precedent for decades of vampire films and stories following in her wake, Carmilla has yet to take a substantial bite out of popular culture the way Bram Stoker‘s creation has. Emily Harris’ take on the classic vampire attempts to rectify that and presents a moody and dreamlike atmosphere faithful to the novella it’s adapted from—mostly. While the novella was a product of its time and tones down the themes of lesbian attraction and romance, the 2020 film elevates homosexuality to the forefront of the story but strips it almost entirely of its vampiric roots.

Gone are all the supernatural elements Carmilla wields in her arsenal. She never drinks Laura’s blood. She has no coffin, no super-strength, and no ability to transform into various animals, all of which became staples in vampire fiction after Le Fanu’s novella. Instead, Harris’s re-telling relies primarily on slight references and implications to Carmilla’s devilish nature and focuses the story less on monster horror and more on period romance. It also closely explores the blossoming sexuality of its protagonist, Laura.

Poor Laura (Hannah Rae) lives in isolation and struggles to find joy and meaning in a repressive but deceptively tranquil existence. She spends her dull days daydreaming and subtly pushing back against the superstitions imposed on her by her stern governess Miss Fontaine (Jessica Raine), who wants to keep Laura from making the same mistakes she herself made as a younger woman. It’s hypocrisy disguised as concern and a drive to save Laura’s soul. Among other questionable practices rooted in Christianity, Miss Fontaine forces Laura to tie her dominant hand behind her back because left hands are the sign of the devil, and that’s something Miss Fontaine won’t let stand.

Laura is rightfully displeased with Miss Fontaine’s religious-inspired practices and pious-driven answers to all her questions and curiosities about the world and the afterlife. The biblical tales that once filled her with awe and slight fear no longer cut it and don’t fulfill her in a satisfying way, but Miss Fontaine is adamant that her charge strives for proper womanhood and all good girls follow God’s teachings without question. Their silent battle of wills becomes even more complicated when an injured Carmilla (Devrim Lingnau) is brought to the household after the carriage accident. Laura is filled with the lust of excitement by someone new, but Miss Fontaine views Carmilla as both an outsider and as the very embodiment of the devil she’s fought so hard to protect Laura from. 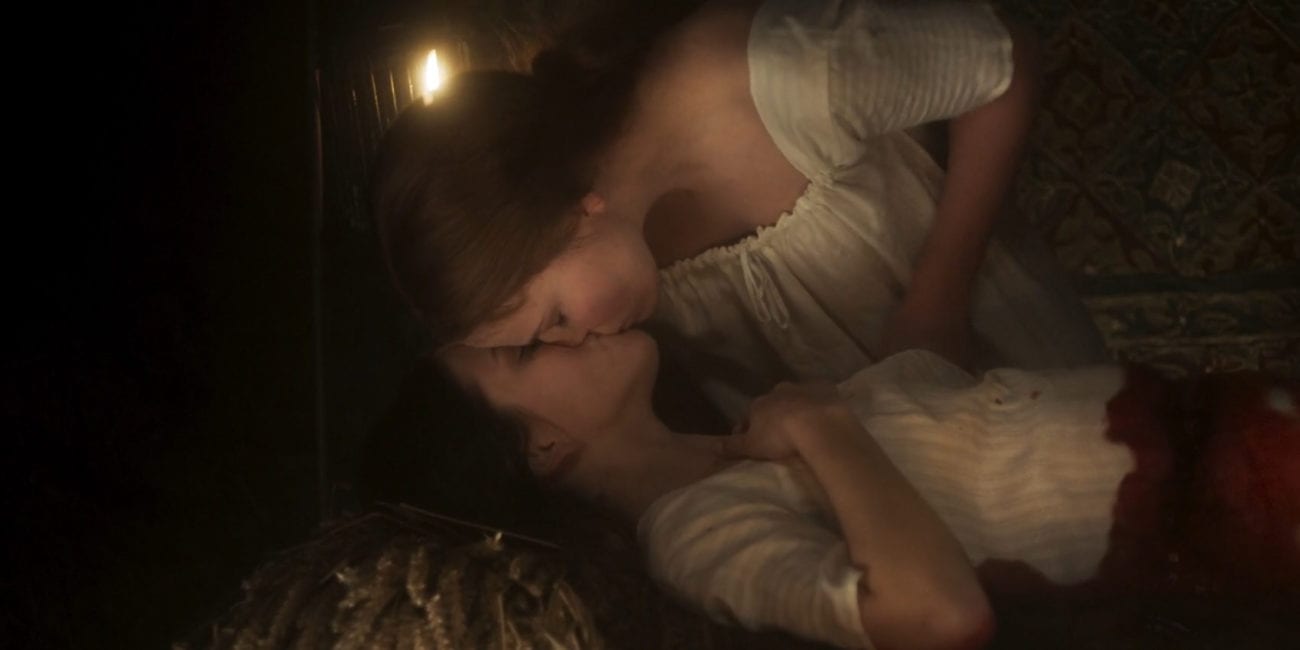 It doesn’t take long before their friendship evolves into romance, and Laura and Carmilla spend long hours of the night together. This slowly begins to affect Laura, who becomes pale from the lack of sunlight and exhausted from a suddenly interrupted sleep schedule. Miss Fontaine ignores the evidence that’s so clearly in front of her—because it’s easier to explain things away with superstition than science—and becomes concerned after learning that several girls in the village became inexplicably sick and died. Her suspicions of Carmilla continue to build until she discovers a demonic book belonging to the girl and witnesses Laura and Carmilla in the midst of passionate intimacy. This spurns Miss Fontaine and the rest of the household to murder Carmilla to free Laura from the devil’s influence.

For a film that’s not necessarily a horror film, there’s plenty of horrifying elements, from the dim and mysterious lighting to Laura’s bloody daydreams and Carmilla’s horrific fate. The film becomes even grimmer because the characters’ motivations change from wanting to protect Laura from the vampire grooming and feeding on her to punishing a young girl for exploring her sexuality and lack of conformity. This is where the issues with stripping Carmilla of its vampiric roots arise. It’s never clear if Carmilla is a vampire, meaning that Miss Fontaine’s fear of her becomes less of a legitimate concern of the undead to one of Christian hysteria. Since Carmilla isn’t presented as a monster in this film and poses no real threat to Laura’s safety and health, the message, whether intentionally or not, becomes one that punishes homosexuality and culminates with the bigots emerging victorious.

It’s unfortunate because we have plenty of reminders in both popular culture and real-world history of humanity’s tendencies to demonize the other and punish a lack of conformity. Vampires have long pushed back against these ideals and are the symbolic rebels for independence and sexual liberation, and cutting away these vampiric elements strips Carmilla of many of its original critiques and messages.

There’s plenty of material in this movie to enjoy. The performances are all top-notch, the cinematography and costume designs are gorgeous and well done—but what could have been a celebration of one of the most important vampires in all of fiction instead becomes a cautionary tale of superstition and bigotry. It’s not hard to deny the impact that Carmilla holds on the vampire genre, and so much of what’s attributed to the Prince of Darkness is actually thanks to Carmilla (not to mention the historical beliefs over the dead and the importance of blood). At the end of the day, Carmilla works as a tragic romance but seems a far departure from the unashamedly vampiric original tale.